The new Amazon Payments platform will now allow customers to order ahead at participating retailers and pay through their Amazon accounts.

It is getting harder and harder to keep up with Amazon.com, Inc (AMZN 1.64%). Just this year, the behemoth online retailer already has:

Whew! Most companies don't entertain that number of new ideas in a decade, much less the first half of a year. With all this going on, investors could be forgiven for missing the company's latest bit of news. Earlier this month, Amazon announced a new feature for its mobile app, Amazon Pay Places. The new Amazon Pay platform will now allow customers to order ahead at participating retailers and pay through their Amazon accounts.

The feature is being given what amounts to a glorified test run with select T.G.I. Friday's locations in Boston, Philadelphia, Baltimore, Washington D.C., Richmond, VA and Wilkes-Barre, PA. The function will be found inside Amazon's app in the drop down menu under the "Programs and Features" section.

Is there any company that can keep up with Amazon's different ventures? Image source: Amazon.com Inc.

Amazon Payments is a digital platform that allows customers to make online or mobile purchases using their payment information from their Amazon accounts. In a February press release, Amazon gave investors a look behind the curtain at the platform. Though it has surely grown in the interim, at the time of the release more than 33 million customers had used Pay with Amazon to make a purchase. Though we weren't given total payment volume, the company did state it had almost doubled in 2016. Its merchant coverage growth was even more impressive: Vendors accepting Amazon Payments increased by 120% year over year. The press release proclaimed more than half of the customers who used the platform were also Amazon Prime members.

Amazon Pay Places is a significant expansion for Amazon Payments, ushering the platform into the world of brick-and-mortar retail. In an interview with PYMNTS.com's Karen Webster, Amazon's Vice President of Amazon Pay Patrick Gauthier said:

One of the things we've been doing the last couple of years is thinking about how to connect merchants with the Amazon customer base, knowing they are very active connected shoppers whether online or on mobile. With what we are taking the lid off today — we are enabling merchants to instantly reach people who are highly mobile and very desirable as customers — without having to worry about app distribution. 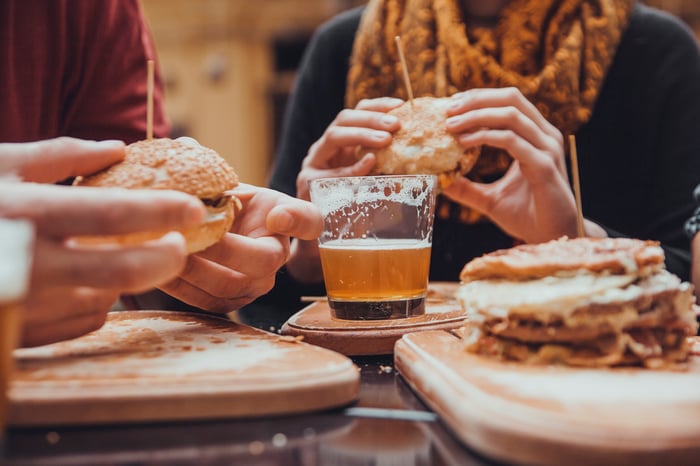 While Amazon Payments continues to show explosive growth, it will probably eventually hit a wall. After all, it's hard to imagine that too many retailers will want to share their sales data with a deadly competitor like Amazon. At the 2017 Bernstein's Annual Strategic Decisions Conference, PayPal Holdings Inc's (PYPL 0.85%) CEO Dan Schulman stated PayPal was able to significantly increase its merchant coverage after being spun off from eBay for the same reason until then, rival retailers were wary of eBay having access to its data. Schulman said:

...the real difference is we're a neutral third party now ... I did not realize how much that was holding back eBay ... PayPal being associated with eBay, you have merchants who just naturally thought of eBay as a potential competitor, and therefore, were reluctant to put a payment scheme in that takes data and information that might somehow be shared back with eBay. And so being a neutral third party, tremendously valuable.

Take another look at that bullet point list at the top of this article. If you are a merchant would you want to share your data with Amazon? There are certainly some sellers who would probably not care such as restaurants, hotels, doctor offices, and entertainment venues but the list dries up pretty quickly from there. For this reason, while Amazon Payments might continue to grow for some time, I don't think PayPal or other digital wallets will become Amazon's next casualties anytime soon.