It looks like Buffalo Wild Wings (NASDAQ:BWLD) just can't catch a break. After sharing another disappointing earnings report on Wednesday night, the owner and franchisor of casual dining sports bars is trading at multi-year lows. B-Dubs investors haven't seen these share prices since the summer of 2014.

What did the company do to deserve an 8% price drop in after-hours trading? Let's find out.

It's not a pretty picture, and the negative market reaction makes a lot of sense. Same-store sales dropped 1.2% lower in the second quarter for company-owned restaurants, and franchised stores saw a 2.1% decline for that metric. On top of that, Buffalo Wild Wings' profit margins are shrinking no matter whether you slice the numbers on the restaurant level or in terms of total operations.

To combat the plunging profits and weak top-line growth, B-Dubs continues to build out its store network.

In the first half of 2017, the company added 5 net new Buffalo Wild Wings locations owned by the company and 9 net new franchised restaurants. The R Taco concept expanded from 15 stores to 22 over the same period, including 6 new franchise locations and no store closings. The PizzaRev brand closed down both of its company-owned test locations, and can now be seen as a failed experiment.

All told, B-Dubs added 27 new stores and closed or relocated 6, which adds up to a 1.7% larger restaurant network in the space of six months.

The company is also rolling out a redesigned website and a new mobile app in order to make takeout orders easier. Those efforts have not paid dividends yet, but do keep an eye on B-Dubs' takeout strategy. If properly executed, this idea could attract more business while keeping labor costs low, since takeout customers don't need much table service.

On that note, management is complaining about high labor costs due to rising healthcare expenses and management wages. A "fiscal fitness" program kicked off in the first quarter, seeking to reduce operating costs without hurting the guest experience. For starters, the company has ended the guest experience captain program that started three years ago. A revamped menu with an optimized cost structure is coming in the second half of 2017, followed by new systems for managing the workforce. 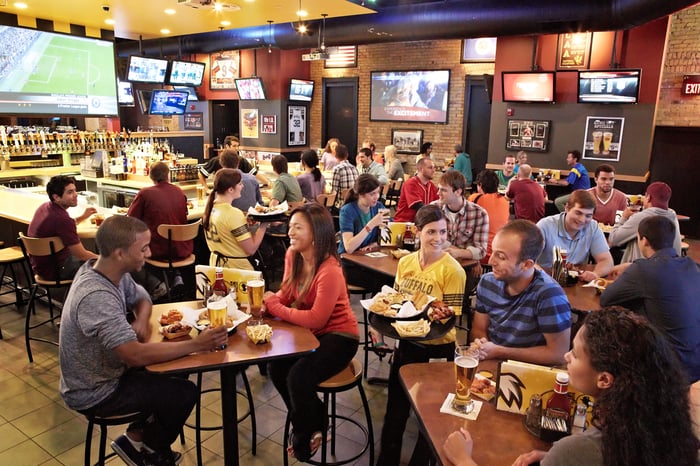 Lately, the restaurants haven't always been as full as this one. Image source: Buffalo Wild Wings.

On top of all of that, longtime CEO Sally Smith is retiring and the company has yet to identify a suitable replacement. And of course, activist investor firm Marcato Capital is pushing for bigger and deeper changes. The firm holds three of Buffalo Wild Wing's nine director seats, giving it serious pull in the boardroom.

This is a difficult time for B-Dubs. The company is taking several steps to heal the financial damage, but I'm not sure that these are the right steps. For example, it's not necessarily the best idea to keep growing the store count while both foot traffic and profit margins are shrinking in your average location. But that's what's happening here.

If the takeout strategy works out and the cost-cutting project doesn't slice too close to the bone, B-Dubs could produce a fantastic turnaround over the next couple of years.

But that's more than one big "if," and I wouldn't bet the farm on it. Even at these low prices, I see more risk than reward in this stock right now.