It has been more than 20 years since California, the first state to legalize medical marijuana, made its groundbreaking decision. Now, more than half of U.S. states have legalized its use, and in some places, even recreational use is allowed. By some estimates, marijuana's projected sales will exceed $24 billion by 2025. Undoubtedly, investing in marijuana stocks seems enticing, but be warned: A large market doesn't ensure a related company's profitability.

One of the leading companies focused on marijuana-based treatments, GW Pharmaceuticals (NASDAQ:GWPH), has one cannabinoid drug, Sativex, on the market and one, Epidolex, awaiting FDA approval. Insys Therapeutics (NASDAQ:INSY) doesn't primarily deal in cannabinoids, but it recently received FDA approval for its cannabinoid, Syndros, which the company expects to launch in August. It will take some time, though, before these companies -- and others -- prove that they can bring cannabinoids to market and garner wide enough acceptance among doctors and patients to allow the companies to achieve profitability.

Instead of assuming the high risks associated with these stocks, investors may be better off with a more tried-and-true option -- one whose proven market is thousands of years old: gold. So, let's dig in and look at the best choices for investing in the yellow metal: Royal Gold (NASDAQ:RGLD), Franco-Nevada (TSX:FNV), and the SPDR Gold Trust ETF (NYSEMKT:GLD). 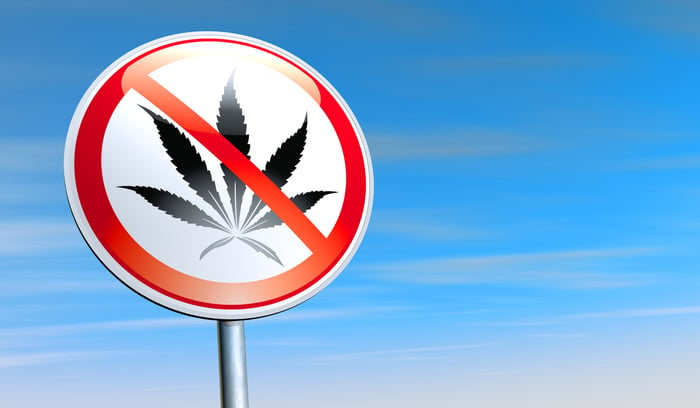 A stock fit for kings and queens

Operating as a royalty and streaming company, Royal Gold provides upfront payments to gold miners, and in exchange, it receives the rights to purchase the mined metal at preset prices or to receive a percentage of mineral production from a mine. As a result, Royal Gold often secures long-term commitments to purchase gold from mines at a steep discount to the market price of the mineral, providing a nice cushion to the volatility inherent in the price of gold. 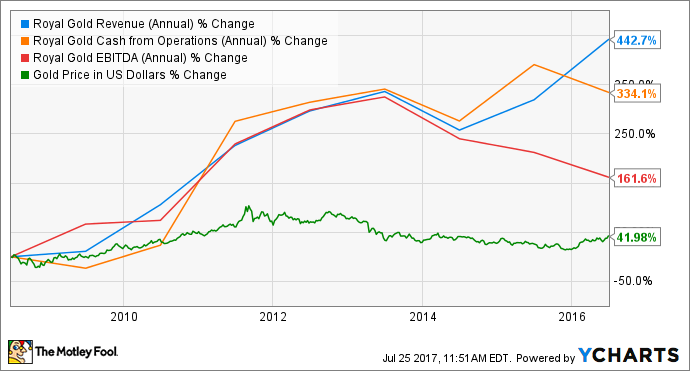 For example, in the course of the company's last 10 fiscal years, it has reported revenue, EBITDA, and operating cash flow growth that has far outpaced the 42% rise in the price of gold. Looking forward, the company seems well-equipped for further growth. In addition to the 38 producing assets that the company had in its portfolio at the end of fiscal 2016, there were 24 development-stage projects and 130 projects in the evaluation and exploration stage.

While the company advances the projects in its pipeline, investors can be reasonably assured that the company won't find itself buried in debt. Over the past 10 years, it has averaged a debt-to-equity ratio of 0.12, according to Morningstar.

As the largest royalty and streaming company by market cap -- and one of the largest gold stocks on the market -- Franco-Nevada is the self-proclaimed "gold investment that works." Although the company's portfolio of 339 assets includes other minerals and oil and gas besides gold, it's the yellow stuff that accounted for the majority of the company's revenue and profits in fiscal 2016: 70% and 68%, respectively.

Unlike marijuana stocks, Franco-Nevada is a cash-generating machine. 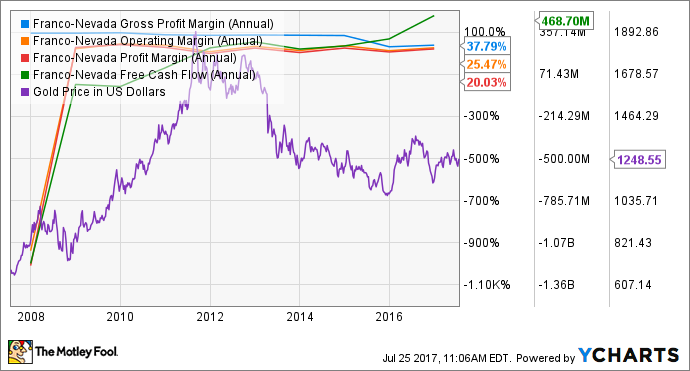 Thanks, in part, to its high margins, Franco-Nevada has consistently grown its free cash flow while the price of gold has risen and fallen.

Like Royal Gold, Franco-Nevada has achieved its growth while not sacrificing its balance sheet. In fact, the company has no debt. This, in addition to the strong cash flow, suggests the company is well-positioned to return cash to shareholders -- something to which it has demonstrated a commitment. Over the past 10 years, the company has raised its dividend more than 95%.

An option based on trust

An investment in gold over one in marijuana stocks certainly falls toward the more conservative end of the spectrum. And for the conservatives who are looking to mitigate risk even further, the SPDR Gold Trust ETF is an ideal choice. Instead of holding individual companies, the fund's holdings include physical gold and, occasionally, cash. 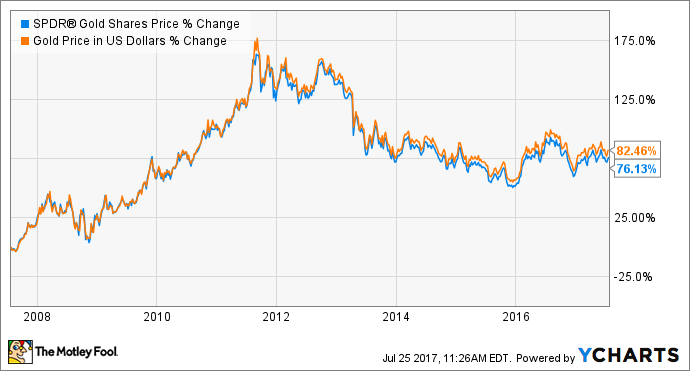 Its stated objective, for example, is to mirror the price of gold. And, over the past 10 years, it has proven successful at achieving its mission.

Investors in the fund, of course, must remember that buying into the gold ETF comes at a cost: a 0.4% expense ratio. In addition, the fund, unlike Royal Gold and Franco-Nevada -- doesn't offer a dividend. But an annual expense and the absence of a dividend may be well worth it for investors seeking a conservative approach.

There's no question that finding the next "big thing" is alluring. There seems to be little debate that the marijuana market will be large, but there's no guarantee that this will translate to marijuana stocks achieving profitability. Consequently, investors may be better suited considering investments in gold. With years of strong cash flows and profitability behind them -- and likely ahead of them -- Royal Gold and Franco-Nevada are two glittering options. However, the glitter may not appeal to all gold-seeking investors, and for those, the SPDR Gold Trust offers a lustrous option.