The leading employment company's earnings report served notice that its revenue growth could turn positive in the coming quarters.

Leading staffing company Robert Half International Inc. (RHI 1.81%) delivered a solid set of results in its latest earnings report, and its numbers imply a relative improvement in the U.S. employment market. Moreover, management highlighted a leading indicator that suggests conditions will improve in the coming quarters.

Let's look at the results from one of the best bellwethers of the U.S. economy. 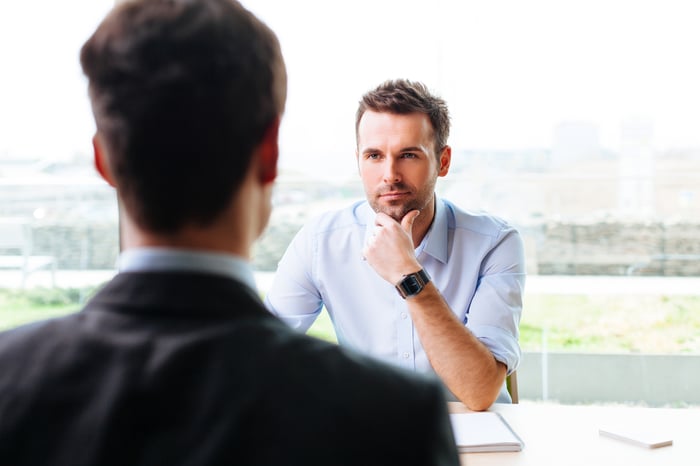 The headline numbers were in line with the midpoint of expectations. For the third quarter in a row, revenue declined, and the guidance for the next quarter implies more of the same.

What happened in Robert Half's quarter

While management couldn't yet proclaim an increase in year-on-year revenue, there are clear signs of improvement. Here's a look at temporary and permanent placement revenue by geography: 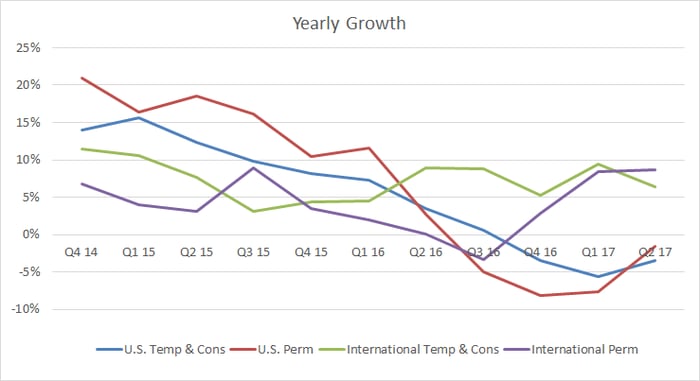 There are three key points to look at from the chart.

First, international revenue growth has remained strong, with CFO Keith Waddell referencing particular strength in Germany and Belgium and an improvement in France. However, the U.K. remains flat, possibly a consequence of negative sentiment over Brexit.

Second, in both geographies, permanent placement employment revenue growth was higher than temporary staffing revenue growth. Talking on the earnings call, CEO Harold Messmer thinks "perm and temp are highly correlated, and we would expect temp to follow perm." If that's true, it would be good news, because Robert Half makes most of its money from temporary staffing. For example, 71% of operating income came from temporary and consultant staffing in the first half.

Indeed, Messmer went on to say that "perm is usually more economically sensitive than ... temp, and it seems to be what's leading at the moment, which is which bodes well for the environment."

Third, while U.S. permanent and temporary revenue growth remains in negative territory, the chart suggests a point of inflection has passed and positive growth could return in future quarters.

Linearity through the quarter

It's a somewhat different story with temporary and consulting revenue growth. In fact, June revenue declined 2%, compared with a 1.6% decline for the quarter, and was down 2.9% in the first two weeks of July.

In other words, conditions clearly improved for permanent placement through the quarter but got worse for temporary staffing. If Robert Half's management is right, then trends in temporary staffing will turn positive in the coming months, but that viewpoint is not confirmed in the trends through the last quarter.

Investors will be looking for improvement in the U.S and in particular with temporary staffing. As ever, employment trends are largely a function of the economy and business sentiment. The indicators are positive, and Robert Half will be hoping its revenue growth can turn positive before the end of 2017.