Several weeks ago, Baker Hughes and General Electric (NYSE:GE) completed their announced merger to form Baker Hughes, a GE Company (NYSE:BKR) -- it doesn't roll off the tongue, does it? Let's just call it BHGE from here on out. The combined entity is now the second-largest oil services company in the world and will combine two aspects of oil services that have traditionally been viewed as separate: equipment manufacturing and contract services.

For some investors who may have been hoping that the company would announce earnings to show the power of these combined entities, I'm sorry to say that this wasn't the case. Instead, we got a look at the results from both Baker Hughes and GE's oil and gas division. Let's take a look at those results and discuss what it means now that this deal is complete. 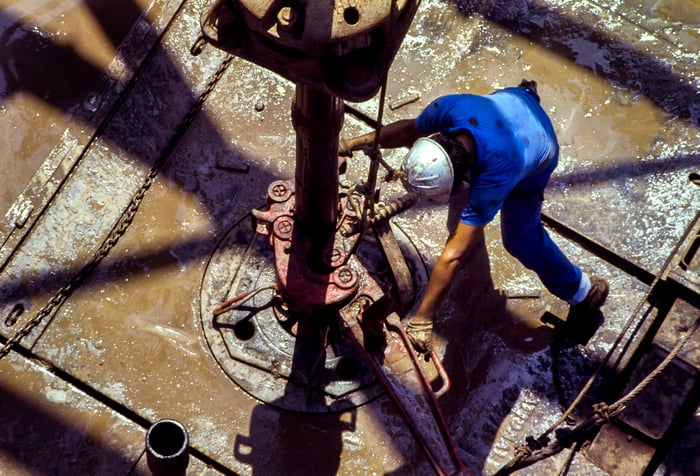 Even though BHGE has completed its merger, results this past quarter were reported as separate pre-merger earnings. Here's the Baker Hughes side of the business.

Baker Hughes' most recent results didn't hold any surprises. It was another mixed bag of results that reflected the fits and starts the oil industry has faced over the last several quarters. For every good sign, it seemed there was a bad one to offset it. For example, revenue in the U.S. -- both in the lower 48 and in the Gulf of Mexico -- grew by double digits this past quarter, but they were offset by downtime in Canada and Alaska related to the seasonal breakup that happens every year around this time. Similarly, new contracts in Mexico and Argentina offset continuing struggles in Brazil. If we go through every segment of the former Baker Hughes, we'll find a similar story.

This story is familiar among the oil services companies today. In fact, Baker Hughes' results almost mirrored those of Schlumberger (NYSE:SLB). Both saw their earnings slide compared to the prior quarter, and both showed similar gains and losses across the globe. The thing that did separate the two was that Schlumberger took a $500 million charge for its business in Venezuela -- it would have posted a gain for the quarter. Both Schlumberger and Baker Hughes generate more of their revenue from their international business than from North America compared to the other big oil services company, Halliburton (NYSE:HAL)

Contrasting this past quarter to the prior year's results isn't going to give any insight. That's because this time last year, Halliburton paid a $3.5 billion merger termination fee to Baker Hughes for their failed merger attempt. Management used the opportunity of a one-time gain on the income statement to take $2.9 billion in asset impairments and goodwill writedowns. 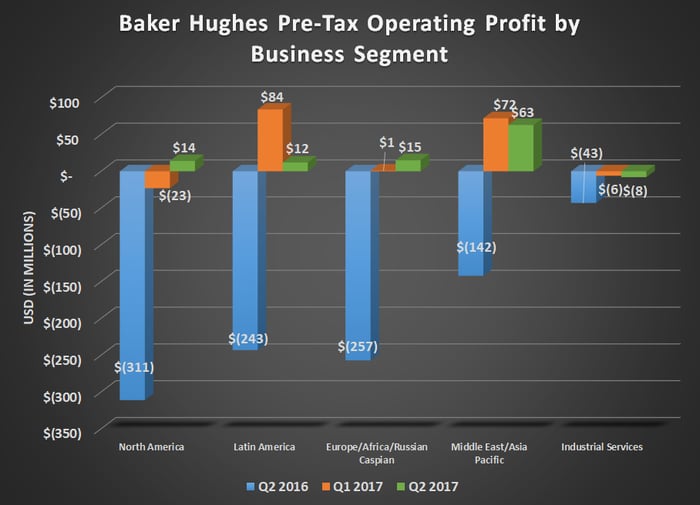 Although the company didn't report General Electric's oil and gas division results in a press release, BHGE did file those results with the U.S. Securities and Exchange Commission. Here's a quick snapshot of those results.

See ya next time, folks

Since BHGE didn't report these earnings together, management didn't provide much context for these results, nor did they provide any outlook or guidance for the quarter. Hopefully, in a couple of weeks, once the integration is complete, management will do an investor event or presentation to provide a strategic update on the integration and its path forward as a combined entity.

Now that the merger between Baker Hughes and GE's oil and gas business is complete, we can start evaluating the business less on speculation and more on the fundamentals of the business. Based on the press release and the SEC filing, it looks like this business will start with very little debt, which will give it ample opportunities to either invest heavily in the business or even add a few more bolt-on acquisitions that would enhance the business even further.

The distinguishing factor for BHGE over its peers is the opportunity in the Industrial Internet of Things. Since the company is loosely tied to General Electric, it will be able to use GE's Predix platform for big data analytics. According to a presentation from last year, GE estimates that using Predix, with the massive amount of collected data from the various stages of the oil and gas value chain, it can improve industry productivity by $200 billion by 2020. We will have to see it to believe it, but it's an opportunity that makes BHGE a stock worth watching.