Ford Motor Company (NYSE:F) reported last week that its second-quarter net income rose almost 4% from a year ago, to just over $2 billion.

Ford's profit was helped out by a tax break, and that fact pushed its stock down rather than up after the earnings news was released. But Ford did have some genuine good news to report behind the headlines, particularly in Ford Credit. The pre-tax profit in Ford's financial services arm rose to $619 million, up 55% from a year ago.

That was a pleasant surprise, given that Ford's prior guidance for 2017 had called for Ford Credit's profit to decline over the course of the year. So why was it up? 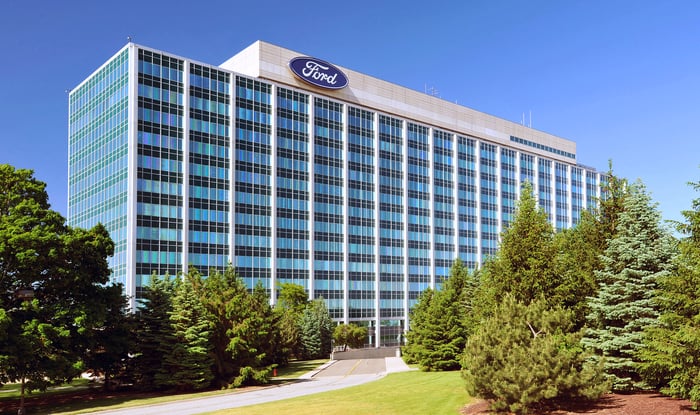 The concern: Too many used cars are a problem for Ford Credit

Ford's chief financial officer, Bob Shanks, had told me back in January that the company expected a glut of off-lease vehicles to be a problem for Ford Credit in 2017.

The concern -- and this is an industrywide concern, not specific to Ford -- has been that the rise of leasing earlier in the decade is now leading to an oversupply in the used-car market as those leases ended and financing companies (like Ford Credit) put them up for auction.

Why is that a problem? New-car leases are priced around a vehicle's "residual value," the expected average value of the vehicle on the used-car market at the end of the lease period. The concern is that excessive supply will push prices down below the residual values that were expected a few years ago when the vehicles were new, squeezing the financing companies' expected profits.

That's actually happening to some extent. But as Shanks explained to me when I asked him about it last week, the good news for Ford Credit is that it's not happening as quickly or as severely as Ford had expected:

We are seeing demand [for off-lease Fords and Lincolns] hold up in the auctions better than what had been expected. We still think on a year-over-year basis that the declines in auction values will still be about 6% on average, but that's a round-up-to-a-6 rather than the round-down-to-a-6 that we had thought [earlier in 2017].

You can see we're growing the business, the margins are good. We did pick up some good news on derivatives during the quarter, that was sizable, about $90 million, but the balance of [Ford Credit's $219 million year-over-year increase in pre-tax profit] was the rest of the business. 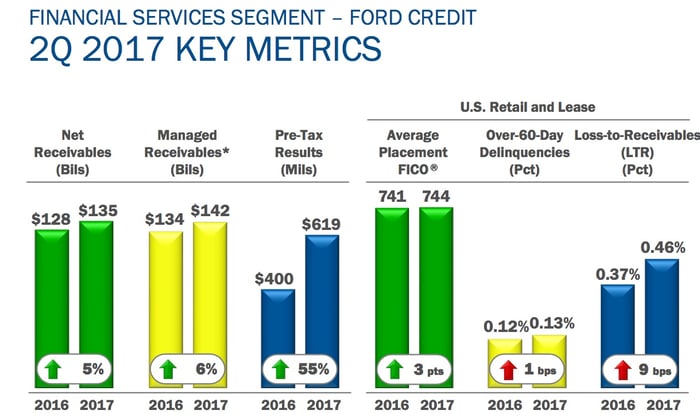 Ford Credit's global net receivables grew 5% in the second quarter to $135 billion, with that gain driven mostly by financing of retail customers. (Ford Credit also provides financing to Ford dealers around the world.)

That growth drove $86 million of Ford Credit's $219 million year-over-year increase in pre-tax profits. Average credit quality remains high, U.S. delinquencies remain low at 0.13%, and the unit has brought its leases as a share of overall retail sales down to 22%, versus the 30% industry average.

All of that is good news. While some analysts have been concerned about auto lenders generally, it looks like Ford Credit continues to be in very good shape.

That may turn out to be a small change, but it's still good to see.