Thirteen years ago, I realized my biggest investing mistake was getting started too late and that the greatest advantage that individual investors have is time. I was determined to help my kids avoid my mistake, so I started investing with my boys that same year when they were just five and seven. But I had a problem. How do I get a five-year-old to understand enough about picking great companies, the time value of money, and being a part owner of a business? Well, I didn't really do that, at first.

Read on for how I got my son to pick his own stocks, the three multibaggers that are now in his portfolio, and the lessons us adults can learn from my young high school graduate and investor. 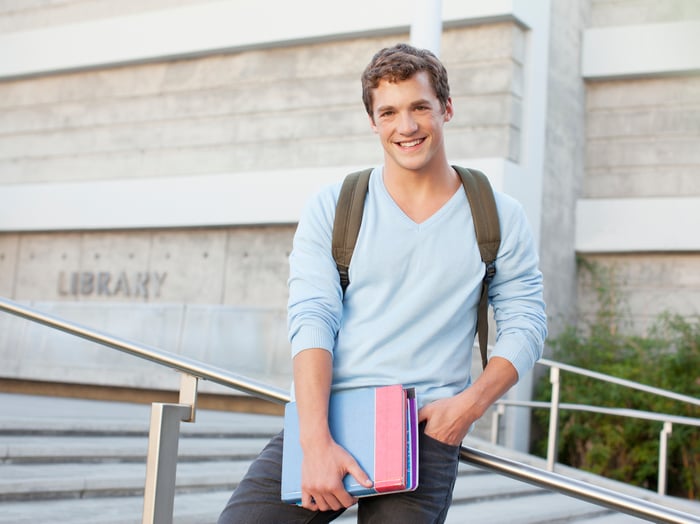 In order to get my kids to pick stocks the first time, I selected a set of six companies they knew and were familiar with, and that I felt were good companies to invest in for the long term. I drew lines on a large piece of construction paper to separate it into six blocks. In each block, I put an item that represented the company; a drawing of the Golden Arches for McDonald's, a video game cartridge represented EA Sports, a plastic Buzz Lightyear figurine stood proudly in place for Pixar (now Disney), and three others symbols to represent other companies. I gave each of my kids a number of pennies representing a fixed dollar amount, and asked them to put pennies on the companies that they felt would be the most successful. More pennies represented more conviction about the company. I invested in the companies that had pennies in their blocks in proportion to the amount of money that was on each.

My son, now a high-school graduate, put some pennies in the McDonald's block. Two years later the company offered its shareholders to swap $1.00 of McDonald's stock for $1.11 worth of the "B" shares of Chipotle (NYSE:CMG), as McDonald's was selling out of the last of its ownership stake in the small upstart burrito chain to focus on the core McDonald's brand. My son had the foresight to take McDonald's up on their offer, which made his cost basis for Chipotle the bargain price of $30.00. He made several other purchases in Chipotle over the years, but this first buy has had the best return of 13 times his original investment.

By the time my youngest son was age seven, my kids were picking their investments on their own by selecting from the buy-rated stocks from the Motley Fool Stock Advisor service. Since they enjoyed getting the Netflix (NASDAQ:NFLX) red-envelope DVDs in the mail more than making the trek to the video store, Netflix became a stock pick and turned out to be the kids' first investment to pass the 10-bagger mark.

When my son picked Netflix in 2006, the future for the company wasn't completely clear of issues. It wasn't streaming movies yet and the competition was heating up with Blockbuster getting into the DVD by mail business and rumors that Apple or Amazon would start a streaming service. Investors were criticizing Netflix for not getting into video game rental and there were concerns about the company's ever growing subscriber acquisition costs. My son didn't care about any of that. All he knew was the movie that took less than five minutes to order on the Netflix website showed up a couple of days later at the house for him to watch. Eleven years later, a resulting 35-bagger return proved this idea was a great investment.

Sometimes the best stock you can buy is one you already own. Fast forward twelve months and the Netflix stock my son purchased the previous year was now showing a loss. Despite that fact, he decided to pick up additional shares. While many of the concerns from the previous year were still real, the company was finally offering a video-on-demand service free for its customers with a DVD rental subscription plan. Buying Netflix at any time in 2007 was a great stock pick, but investors had to hold for the next ten years to get the same 48-bagger result my son did with this investment.

Investing lessons for us adults

While it might seem that I am bragging about my high school graduate being a great stock picker (I kinda am), there are real lessons here for adult investors to take away.

First, don't invest money you'll need in the next three to five years. All of the money I added to the kid's accounts was money I knew we wouldn't need, period. This allowed him to let his winners run without having to cash out for a house down payment or a car and led to these outsized returns.

Second, not all your stock picks will make money, but it's possible to still beat the market with losers in your portfolio. Over the course of 12 years, my son made over 100 buys of 30+ companies. Many of these picks turned out to lose money and one company even went bankrupt, but his portfolio is still pretty awesome. The winners have way outweighed the losers and the result is that he has handily beat the market -- and his dad's stock portfolio returns.

Lastly, I would encourage you to start investing with your kids. While they might roll their eyes at you and ignore you while looking at their mobile phone, don't give up. They will thank you after they graduate and realize they have a pretty nice chunk of change to start their adult lives and more importantly the wisdom of a Foolish mindset to invest and hold for the long term.