With newly appointed CEO Jim Hackett at the helm, Ford Motor Company (NYSE:F) posted a solid second quarter. Ford's revenue inched higher to nearly $40 billion and its adjusted earnings per share checked in at $0.56, far above analysts' calls for $0.43 per share -- more on that shortly. But beyond the typical numbers, there were some interesting takeaways for Ford investors; here are the details.

One of Ford's competitive advantages is its finance division, otherwise known as Ford Credit. It's often overlooked but shouldn't  be, as it generates more profit for Ford than any of the company's regions outside of North America. Ford Credit's managed receivables jumped 6% to $142 billion and generated pre-tax results of $619 million -- a staggering 55% increase over the prior year. It was good enough to be Ford Credit's best quarterly pre-tax result since 2011.

Now, one large drawback to Ford owning a finance division such as Ford Credit is that when lease residual values plunge faster than anticipated, it weighs directly on the bottom line; that caused major pain during the past recession. And while the pressure from a wave of vehicles coming off-lease could still negatively impact prices, auction values remained stronger than Ford anticipated during the second quarter.

The devil is in the details, and that notion holds true for Ford's second quarter. While Ford's profit margins and pre-tax earnings declined compared to the prior-year quarter, its net income actually increased thanks to tax credits. Prior to the second-quarter call, Ford's effective tax rate guidance was around 30%. But in anticipation of corporate tax reform on the horizon, the automaker identified tax opportunities revolving around losses incurred overseas that could be brought back to the U.S. as foreign tax credits. Ford pulled the trigger on one of those opportunities during the second quarter, which dramatically lowered its tax rate to 10.2%. 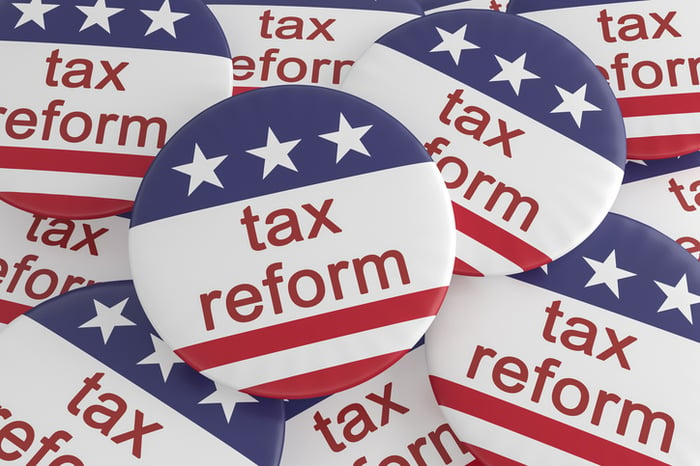 For the first half of 2017, Ford's adjusted effective tax rate checked in at 18.8%; considering that Ford CFO Bob Shanks adjusted the full-year tax rate guidance to about 15%, it seems likely the automaker will pull the trigger on more of these opportunities before it expects its tax rate to return to about 30% in 2018. Without the beneficial tax rate, Morningstar analyst David Whiston calculates the adjusted EPS to be $0.47, which would still have been ahead of consensus estimates.

Investors knew the hits from Brexit and currency headwinds were on the way, but nobody knew exactly what to expect during the second quarter. We now have some answers: All of Europe's key metrics went lower. Ford's wholesalers were down 13% in Europe, which pulled revenue down 12%, compared to the prior year. Its operating margin declined a hefty 460 basis points, from 5.8% down to 1.2%, and its pre-tax results slumped 81% down to $88 million. 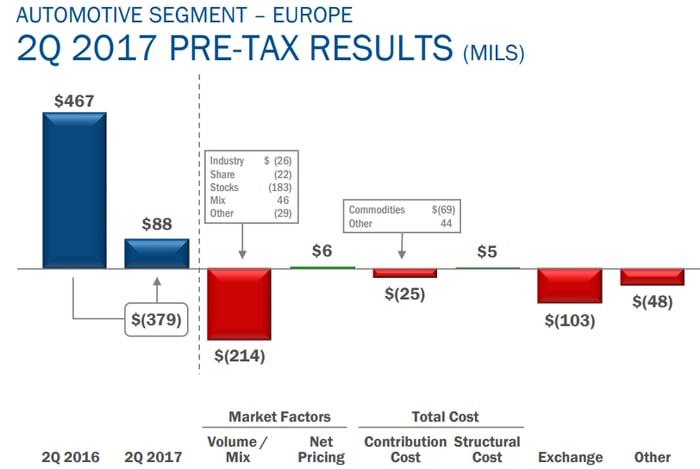 What's interesting about the profit walk is that the currency headwind (exchange) wasn't the biggest drawback for the automaker's European results. That honor goes to dealer stocks that were impacted by tight inventories while the new Fiesta model was ramping up production. Another headwind was rising steel prices that negatively impacted commodities. However, despite these headwinds pushing profits down, Ford's European team managed to keep the region profitable, which is a silver lining for investors. Remember, General Motors hadn't turned a profit in Europe since 1999, which is largely why that company recently sold its European operations.

Despite a strong result from Ford Credit, a salvaged quarter out of Europe, and tax-fueled estimates beat, Ford, pumped the brakes on its pre-tax profit outlook for the full year. It echoed sentiments from cross-town rival GM and emphasized that declining industry sales and rising materials prices would weigh on the bottom line.