Productivity and collaboration software leader Atlassian Corporation (NASDAQ:TEAM) recently announced full-year financial results for fiscal 2017, which ended in June. The high growth stock set ambitious guidance but had no problem beating its own expectations on both the top and bottom lines, in addition to free cash flow.

Yet the stock has fallen each day since earnings were announced. The primary reason: Bears are finding it easy to be pessimistic with the company's swelling losses, which are expected to more than double in 2018 on a per-share basis. While it may not work for every company, a more nuanced view of Atlassian Corporation's "growth over profits" strategy shows why bears need a reality check. 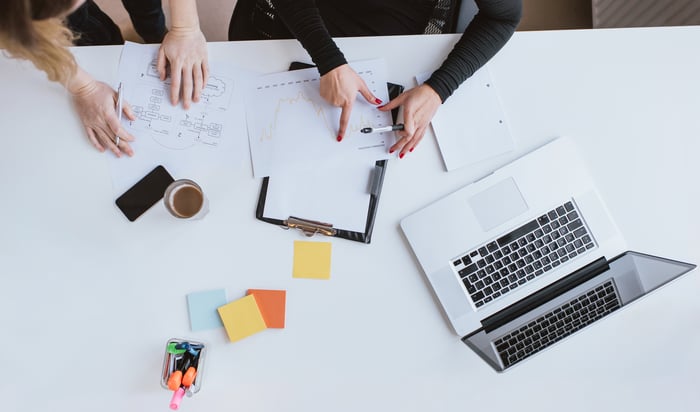 Many information technology companies have adopted the "growth over profit" strategy. And although there are super successful companies to point to when arguing in favor of it, we tend to forget the dozens of start-ups that burned through VC cash before crashing and burning themselves.

That said, the strategy is working very well for Atlassian Corporation. Why? The company is finding no problem growing revenue, operating cash flow, and free cash flow, or maintaining a clean balance sheet. It routinely adds cash to its coffers from operations, which helped it to fund $360 million of the $425 million acquisition price for Trello earlier this year. The remainder was paid in restricted stock.

Atlassian Corporation's ability for shareholder friendly growth was on full display in fiscal 2017:

The company achieved a ridiculous pace of growth last year, but even more amazing is that actual performance smoked management's ambitious expectations. Fiscal 2017 guidance called for as much as $615 million in revenue, net loss per share of $0.29 in a best-case scenario, and free cash flow of up to $165 million. A management team that understands the importance of underpromising and overdelivering is an individual investor's best friend.

It's too soon to say if management will end up underestimating what's possible in the year ahead, but Atlassian Corporation's guidance for fiscal 2018 shows growth is expected to continue at a furious pace.

It's tough to argue with that, which is why investors shouldn't worry about mounting losses.

The growth-over-profit strategy is working (for now)

Atlassian Corporation maintained profitable operations up until its IPO, and then used the influx of financing raised from going public to turbocharge growth. That steered the company deeper into the red, which appears likely to continue for the foreseeable future.

For now, however, the strategy is working and not posing much risk to investors: the stock is up 50% year to date. Plus, if push comes to shove and the company needs to quickly rein in expenses, then it has plenty of flexibility within R&D expenses -- the largest line item on the income statement by far. R&D expenses grew 49% from fiscal 2016 to fiscal 2017. At $310 million, the company spent more money on R&D than on marketing and sales, general, and administrative expenses combined.

In other words, the recent and planned increases in R&D expenses more than explain the company's growing losses. It also holds the key to returning to profitability if growth begins to slow and Mr. Market gets antsy. Therefore, bears who are worried about increasing losses right now need not be concerned about Atlassian Corporation's long-term viability.