Founded in 1993, Chipotle (NYSE:CMG) created the fast casual restaurant category. While the company has had tremendous growth serving customers great-tasting burritos made specifically to order, it's stumbled lately with food safety concerns due to E. Coli and norovirus, and even had a rodent incident in a store.

I'll look back at the history of Chipotle starting from its first restaurant, its partnership with McDonald's, its IPO and growth phase, and how it's handled its latest issues. This history gives investors some perspective on this once Wall Street darling that is now is dealing with the biggest challenge in its history, fixing its reputation.

1993: Steve Ells and his "starter" restaurant

Steve Ells, art history major, and a classically trained chef couldn't open the fine-dining restaurant he wanted to because he lacked the necessary funds. So he borrowed $85,000 from his father and opened his first restaurant in Denver that was influenced by his visit to a Mexican taqueria. Ells was impressed by the efficiency of the restaurant and the speed at which the line moved. He estimated the restaurant's financials on a napkin and decided this restaurant could be the "cash cow" he needed to fund the restaurant he really wanted to open. Ells made a menu influenced by his work at Stars, a high-end restaurant in San Francisco, known for its use of local, high quality, artisanal ingredients.

I could use this [taqueria] format and reinvent this traditional Mexican food and lighten it up. Make it sexier and more relevant: Cilantro-lime rice instead of heavy red rice. Whole beans instead of refried beans. And emphasize it with seasoning, fresh herbs and citrus.

The money from his father wasn't much, so to decorate he used light fixtures bought from a local hardware store, left the piping exposed and the floor as bare concrete. Plywood and stainless steel decor throughout was out of necessity to save money, but it also appealed to Ells' focus on food and matched his desire for the restaurant to emphasize the basics.

Ells opened Chipotle after a night of marinating meats and making puree from chipotle. Even with no menu board, he and two prep cooks sold a few hundred dollars worth of burritos. The second day, sales doubled. Continued success encouraged Ells to open another restaurant. The second location had been a House of Pies that had a linear display line which made for an efficient way to serve customers. This layout became a key component of fast throughput (the rate at which customers are served), a critical success factor in the growth of Chipotle restaurants.

These elements from the first few restaurants live on to what Chipotle is today: An inviting environment with a focus on high-quality food and a price tag to match, but with the efficiency and limited service of a fast-food establishment. The combination of these elements is now known as "fast casual."

Ells borrowed $1.5 million from his father to open even more restaurants. Having tapped out Dad's wallet, his father encouraged Ells to seek outside investors. Getting rejected by the first 13 investment banking and venture capital firms, Ells became frustrated that he was spending too much time trying to raise money and not enough time running his restaurants. Ells was referred to McDonald's by a friend of his and this started the next chapter of the Chipotle story.

Ells was invited to make burritos and tacos for the McDonald's board of directors, which they loved. McDonald's spent some time doing due diligence and negotiating with Ells, and eventually, McDonald's made an initial investment in Chipotle.

McDonald's growth had been stalling and the company was trying to convince Wall Street that it was still a growth company. The company's purchase of Chipotle was the first of diversification efforts that eventually included Boston Market, Donatos, Pret A Manger, and Fazoli's.

McDonald's helped Chipotle in the areas of distribution systems, real-estate expertise, construction knowledge, and organization structures. Many times McDonald's would offer suggestions such as drive-throughs, breakfast, and adding "fresh" to its name. Ells was stubborn and politely rejected these suggestions keeping the Chipotle brand intact and clearly separate from McDonald's.

Eventually, the relationship ended. Over the seven years McDonald's owned Chipotle, the company invested over $360 million, which enabled Ells to grow from 14 Chipotle restaurants in the Denver area to 489 stores in 21 states.  Chipotle went public in January 2006, starting the next phase of Chipotle's growth with Steve Ells at the helm as CEO.

The fast casual concept that Ells created was highly replicable, very profitable, customers loved the food and would wait in lines out the door to get a great tasting burrito. Despite slowing growth during the 2008-2009 recession, the company performed extraordinarily until 2015. Chipotle quadrupled the number of stores, increased revenue per store from $1.3 million to $2.5 million and the stock price climbed from a closing price of $44 in its IPO to over $754 in August 2015. The company even exploited the efficient operational model and expanded into an Asian food concept called Shophouse, and a pizza concept called Pizzeria Locale. 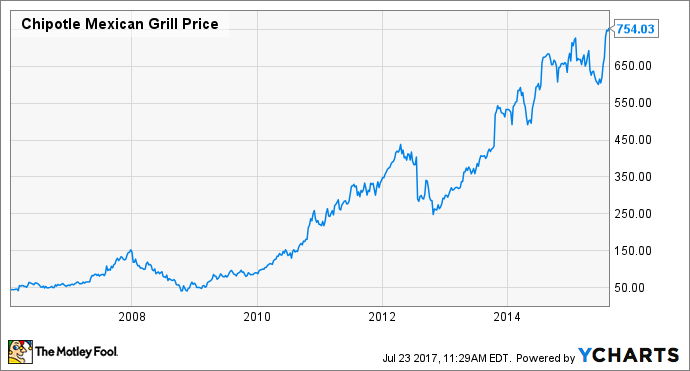 During this period, Chipotle was obsessed with throughput. An example of that obsession was the fact that Ells worked with engineers over four years to make the perfect tortilla warmer. When it was finally finished Ells said,

You have no idea how dramatically better it is: it give us faster service; hotter, better-tasting tortillas that look better and last longer; and it uses less energy!

In Q2-2015, throughput was starting to stall, so Monty Moran, then co-CEO, held a national throughput competition to see which stores could serve the most customers in an hour. Chipotle eventually was able to serve 350 customers in one hour in its most efficient stores.

Chipotle's mission of "food with integrity" grew in importance during this time. Management described the initiative in its S-1 filing to go public this way:

...we want to know where all of our ingredients come from—how vegetables are grown and animals are raised—so that we can be sure they are as flavorful as possible while understanding the environmental and societal impact of our business.

Since then, the company's efforts have expanded to include local sourcing, organic produce, naturally raised meats, and removal of GMOs, preservatives, and artificial colors. Today the company details every single one of its ingredients on its website from where they are sourced to how they are raised.

While it seemed that Chipotle could do no wrong, all this success came to a screeching halt at the end of 2015 and early 2016 when the restaurant experienced two E. coli outbreaks and a norovirus event.

In October 2015, Chipotle experienced the first of two E. coli outbreaks that infected 60 people and hospitalized 22. A norovirus event in December of that year affected 141 Boston College students. Many customers stopped coming to the restaurants and, as a result, costs went up due to lower throughput and high-cost food safety initiatives. Average restaurant sales decreased over the next five quarters dropping to an annual run rate of $1.87 million in Q4 2016, a number which hadn't been seen since 2010. Store level costs increased from a healthy 73% of revenue to an anemic 87%. Chipotle recorded its first ever loss in Q1-2016.

My colleague Dan Klein wrote a comprehensive article covering everything Chipotle implemented as a result of the outbreaks. While much had been done, in December 2016, CEO Steve Ells publicly shared his frustration with the progress of the company's recovery and dissatisfaction "with the quality of experience in some of our restaurants." He indicated over half his restaurants would earn a grade of a "C" or worse. Several days later, Ells announced that co-CEO Monty Moran, and his friend since high school, would resign and give up his board seat.

With Moran out of the picture, Ells quickly dismantled many of the initiatives that Moran put in place and implemented a new simpler bonus program for store managers that focuses on only five metrics within their control. Ells didn't stop there. He is introducing new menu items including a dessert and queso, bringing in technology improvements, and he has hired a Chief Restaurant Officer, all with the goal of getting customers back in the door and improving operations.

While the management actions and the Q1 earnings report were encouraging, it would likely take several years for Chipotle to get back to peak sales volume of 2015, but that was before recent events. Another norovirus incident and mice captured on video in a store in Texas has dropped the stock even further and may point to a larger problem at the company.

Ells has defied the odds to build this company from a single restaurant to over 2,300 today and knows that having a one-star reputation doesn't bring customers in the door. Given the challenges he's overcome in the past, it's clear that he won't rest until Chipotle customers are lining up outside the door to eat at his restaurants again.