Shares of American telecom Sprint (NYSE:S) jumped by as much as 11.5%  Tuesday morning, reacting to a decent quarterly earnings report and management's hints that a buyout bid might be on the horizon. As of 2 p.m., they were up about 10%.

In the first quarter of its fiscal 2017, which ended June 30, Sprint reported GAAP earnings of $0.05 per share and $2.9 billion in adjusted EBITDA profits, all culled from net operating revenues of $8.2 billion. This was the company's first net profit in three years, its largest EBITDA haul in a decade, and a solid effort overall.

On top of that, Sprint CEO Marcelo Claure offered an update on the company's hunt for a merger partner.

"We have been going at it for the last, you know, since the spectrum auction has finished, so hopefully this is going to come to an end in the near future," he said on a conference call with analysts. "We are very proud that we have a company that now can sustain itself on a stand-alone basis, but the potential value creation of some sort of horizontal/vertical integration would be significantly better than on a stand-alone basis." 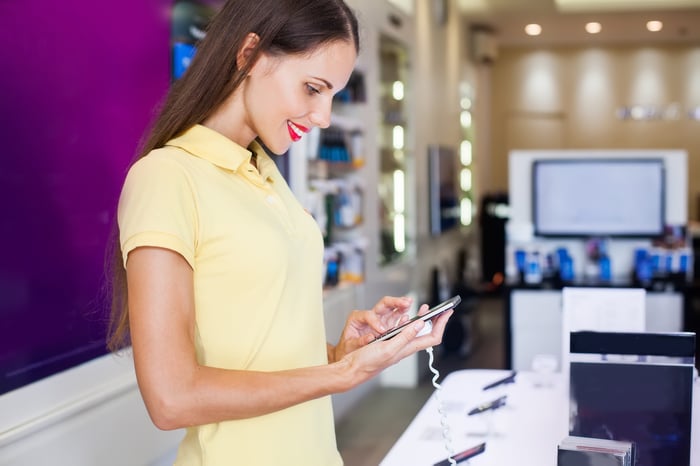 Claure has more than an open mind about merger discussions -- open arms would probably be a better description.

Sprint still doesn't have a specific partner in mind, but the search appears to be profoundly serious. The two most commonly suggested potential buyers have been fellow telecom T-Mobile USA (NASDAQ:TMUS) and cable TV giant Charter Communications (NASDAQ:CHTR), and both of these options appear to be on the table today. Claure made no effort to narrow investors' thinking down to a particular partner or even a specific target industry, but he sounded optimistic about the prospect.

"We think, in the near future, we should be able to strike a deal with one of the different players and I think now we know what the potential opportunities are," he said. "Again, we are encouraged by what we've seen so far and the fact that Sprint has options is where we wanted to take Sprint today."

That step forward was good enough to propel a significant share price boost. Sprint shares are now trading roughly 8% below their yearly highs, which is a nice step up from the 17% gap as of Monday's closing bell.