Match Group (NASDAQ:MTCH) made a splash on the stock market when it debuted in 2015, as the leading online-dating company represented a new kind of business for investors.

While the debut was greeted with excitement, shares of Match Group have gained only modestly during its public tenure, and have traded mostly sideways over the last year. However, the parent of popular dating properties like Tinder, OkCupid, and its namesake Match still holds significant promise as a growth stock. 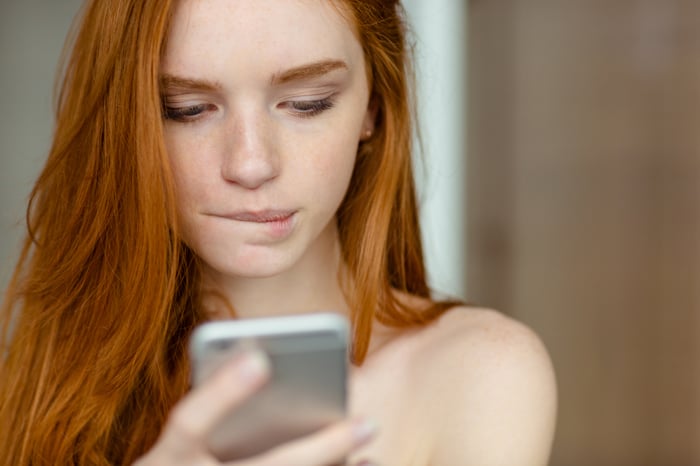 Revenue increased 15% in its first quarter, but operating income surged 72% in the period as marketing expenses -- the company's biggest line item -- actually fell in the quarter. Adjusted growth in earnings per share was up just a penny, to $0.12, due to adjustments and an increased share count.

As Match Group is a solidly profitable company, investors may be wondering if or when it might start to pay a dividend.

Are dividends in Match's future?

The good news for investors is that unlike companies in tech and other high-growth fields, Match Group is profitable, and its profits are steadily growing. Net income jumped more than 40% in 2016 to $171 million; however, adjusted EPS fell as shares outstanding increased by nearly 50%.

Match Group's use of share-based compensation is a bad sign for dividend payouts coming in the near future. Paying employees with stock is a common tactic of tech companies and growth-stock companies, which often seek to leverage their highly valued stock and conserve much-needed cash -- especially start-ups and others that are burning cash. As a consistently profitable company, Match's dependence on share-based compensation is puzzling.

However, stock-based compensation is not the primary reason for the aggressive increase in short count. Instead, the company has paid handsome awards in stock options and restricted stock to IAC Interactive Group (NASDAQ:IAC), the one-time parent company that still owns a majority of Match stock.

Free cash flow was also strong last year at $185.2 million, even as the company took a $53 million stock-based compensation expense, though that effectively diluted the stock by just about 1%.

Another reason investors should mute any expectations about an upcoming dividend is Match's strategy of growing through acquisitions: The company has put together a portfolio of more than 45 brands, in large part by taking out its wallet.

Its most recent high-profile acquisition was of PlentyOfFish in 2015, for $575 million, which drove significant top-line growth over the following year. While Match Group is the global leader in online dating, the industry has low barriers to entry, so making acquisitions can help fend off potential rivals. That history of acquisitions has given the company a substantial debt load of $1.2 billion, and interest expenses that ate up more than a quarter of operating income last year. Its recent sale of Princeton Review, which made up the entirety of its "non-dating" segment, should help it pay down debt. Match did not disclose the amount of the sale, though it reported proceeds of $96.4 million in its first-quarter report.

Companies that regularly make acquisitions often avoid paying a dividend so they can save up to buy other companies. Warren Buffett's Berkshire Hathaway has famously never paid a dividend so Buffett can pool profits to "hunt elephants" -- making big acquisitions such as Heinz, BNSF, or Precision Castparts, all of which he has purchased in the last decade.

With its focus on acquisitions and consistent share dilution, Match is unlikely to start paying a dividend in the near future. However, the company's profitability and average valuation are good signs that it will pay a dividend at some point. As the company matures, and especially if its valuation falls, I would expect Match Group to eventually reward its shareholders with a dividend.