Over a span of decades, Wal-Mart Stores (NYSE:WMT) disrupted and then dominated a huge swath of the retail industry. In the process, the discount behemoth made early investors a fortune along the way.

On that note, here are the major bear arguments against Wal-Mart.

Here's what the bears would say about Wal-Mart Stores. Image source: Getty Images.

Wal-Mart, like many brick-and-mortar retailers, is in a vicious fight for survival. The retail giant's store traffic, sales, and margins are all under pressure from the relentless growth of e-commerce juggernaut Amazon.com (NASDAQ:AMZN).

Amazon's ascent has been breathtaking, with the e-commerce titan's revenue up by a factor of 10 over the past decade, and far exceeding Wal-Mart's slightly more than 30% growth during that time. 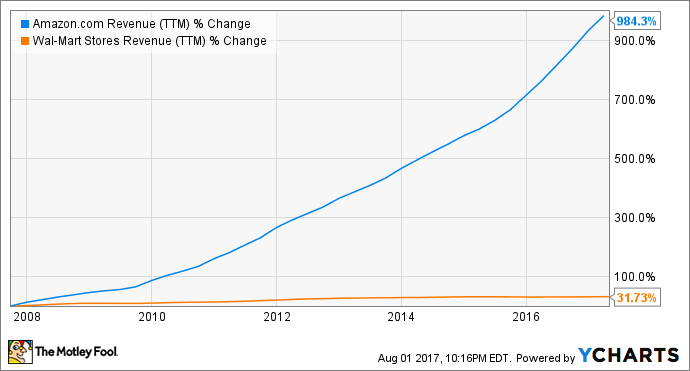 Amazon's torrid growth is a major threat to Wal-Mart. Amazon CEO Jeff Bezos and his team have an unwavering focus on delivering more value to the customer -- and on widening Amazon's competitive moat. To that end, Bezos is notorious for reinvesting Amazon's rising cash flows back into new growth-creating initiatives, which also tend to be value-destroying for its competitors.

As an example, Amazon is investing heavily in strengthening its global distribution network, thereby lessening one of Wal-Mart's last remaining advantages: immediacy. With shortening delivery times, the ability to quickly pick up some items at one of Wal-Mart's stores is now less meaningful for customers, compared to simply waiting a day or two -- or even just a few hours in some cases -- for a convenient online delivery from Amazon.

No retreat, no surrender

Wal-Mart is fighting back by ramping up its own e-commerce operations. It paid $3.3 billion to acquire Jet.com in 2016 and installed its founder and CEO Marc Lore as head of its e-commerce division. Since that time, Lore has gone on a buying spree, snapping up online retailers such as Bonobos in order to broaden Wal-Mart's online brand portfolio and infuse its executive team with experienced e-commerce talent. Lore also spearheaded Wal-Mart's move to offer free shipping on orders over $35, which forced Amazon to lower its free-shipping threshold. And under Lore's tenure, Wal-Mart is aggressively courting online merchants in an attempt to weaken Amazon's network of third-party merchants while strengthening its own. So far, Wal-Mart's efforts appear to be working: Its e-commerce sales surged 63% in the first quarter.

Yet the bears would point out that as Wal-Mart has moved to close the gap between itself and Amazon in the e-commerce arena, Amazon has not stood still. In fact, Bezos and company recently launched a major attack on Wal-Mart's most important business: groceries.

In June, Amazon agreed to acquire leading organic grocer Whole Foods (NASDAQ:WFM) for $13.7 billion. Amazon has long dabbled in grocery experiments, but the Whole Foods deal is an outright assault on the $600 billion U.S. grocery industry. It's also a direct attack on Wal-Mart -- the current market leader.

Wal-Mart's shares sank on the news, but have since recovered to new 52-week highs. Initial fears that a combined Amazon and Whole Foods would quickly gobble up market share likely subsided when investors realized that Wal-Mart and Whole Foods compete at different ends of the pricing spectrum.

Still, the bears would remind us that Amazon has risen to prominence largely due to its low prices, so it's very possible that it will ramp up the "price investments" that Whole Foods has already begun to make in recent years. That could make the combined company a larger threat to Wal-Mart's grocery business than many bulls currently believe it could become.

Either way, this is a battle that investors should watch closely, as it's likely to be a major determinant of Wal-Mart's stock-price performance in the years ahead.