It's no secret the television industry is facing extreme pressure from cord cutting. Nearly every major television network has lost subscribers over the last five years, and they're bound to lose more in the next five years. That's why Discovery Communications (DISC.A) and Scripps Networks (SNI) are teaming up after the latter agreed to Discovery's $11.9 billion acquisition offer.

The combined company will own a massive portfolio of networks that capture nearly 20% of ad-supported pay-TV viewership in the U.S. That's extremely valuable for the media company as it goes to bat against mega-distributors like Comcast, Charter Communications, and AT&T, which combine to control well over 60 million television households.

Both have dedicated audiences

No television network has been immune to subscriber losses, but both Discovery and Scripps have dedicated audiences that continue to tune in often. From 2011 to 2016, Discovery's combined viewership across its networks increased 33%. Meanwhile, Scripps continues to set new records for ratings across its portfolio of networks.

As a result of these rating increases, both have managed to modestly improve their ad revenue even as subscriber counts fall. The combined company could improve ad sales with better-guaranteed viewership in targeted demographics. Both companies' networks are particularly appealing to women in the 25-54 age group -- a very valuable demographic for advertisers.

Moreover, the combined company will be able to exercise more leverage against distributors, which have been bulking up recently in order to gain leverage of their own. AT&T bought DirecTV to become the nation's biggest distributor. Charter bought Time Warner Cable to make it the third-largest, just behind Comcast. Bringing a dozen or more relatively popular networks to the table means Discovery-Scripps will be able to ask for more money per subscriber or get more channels into lower-tiered bundles. 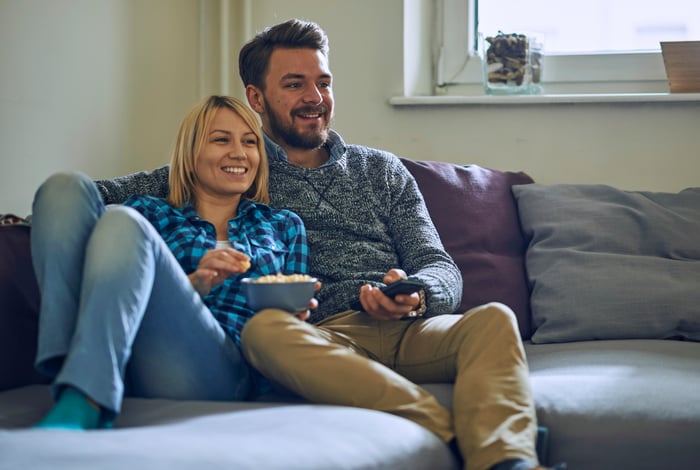 What's more, new content makes it more likely for viewers to watch Discovery and Scripps networks live. That's a big differentiator for advertisers, and it's what makes sports rights so valuable. If the combined company can support live audience growth without significant sports rights costs, it could win an outsized share of advertising spend compared to its programming costs.

Going over the top

Discovery is reportedly exploring options to provide a skinny bundle of networks that excludes expensive sports programming. Such a bundle would be distributed over the top, removing equipment and installation fees from the equation. Many cable companies, including AT&T, Comcast, and Charter, are experimenting with over-the-top bundles already. Offering yet another option isn't a big stretch.

Combining Discovery and Scripps already makes for a compelling stand-alone option. The Discovery Channel is the most requested a la carte cable network. Food Network, HGTV, TLC, and Animal Planet also make the top 25. That puts the company in a very good position to offer a direct-to-consumer product if it chooses. Other networks have had a lot of success going over the top, and with the huge amounts of appealing content, the combined media companies produce the duo could find similar success.

Overall, there's a lot to like about the merger and the prospects for it to spur growth despite operating in an industry under severe pressure.