Duolingo is taking the internet by storm -- and Rosetta Stone (NYSE:RST) is nervous.

Once upon a time, language-learning software company Rosetta Stone seemed destined to disrupt the way languages are taught. Offering foreign language-training via CD-ROM for just a few hundred dollars, Rosetta undercut the costs of college language courses, which offered similar services for several times the cost. When Rosetta Stone had its IPO in 2009 -- in the midst of the financial crisis -- it surprised a lot of investors by first pricing above expectations, then popping 40% in its first day of trading.

Unfortunately, it's all been downhill from there. From a post-IPO high of nearly $30 back in August 2009, Rosetta has seen its stock price fall by nearly two thirds -- to a recent low of just $10 and change. Rosetta Stone, the language-learning disruptor, has instead been disrupted.

Sad to say, Rosetta's IPO marked the high point for the company's fortunes. After quintupling in size from 2005 to 2009, Rosetta's sales stalled out, growing only 6% from 2009 to 2011. At the same time, the company's selling, general, and administrative expenses jumped 30%, and its cost of goods sold surged 47%. And then the real disaster struck.

In 2011, Duolingo began beta testing a free service for learning a handful of popular languages via PC and smartphone app. In 2012, Duo's "gamified" language learning app rolled out to the general public, offering the ability to learn languages in as little as a month or two -- and have fun doing it! By 2013, Duolingo had already been named Apple's free iPhone "app of the year."

That marked the "writing on the wall" for Rosetta Stone. From 2012 on, data from S&P Global Market Intelligence show Rosetta's sales declining steadily, and the company never earned a profit again. But what about the company that did in Rosetta Stone? What about Duolingo?

What we know about Duolingo

Since storming onto the scene in 2012, Duolingo has only gotten bigger. Starting from almost zero users with its widescale rollout in 2012, Duolingo has grown to a community of more than 200 million users today. As far as the company itself goes, Duolingo remains private, and thus not required to publish its financials for open review. What we do know about the company comes by way of public statements from its founder, Mr. Luis von Ahn, from official company statements, and from what added information I've been able to coax from company representatives.

Here's what we know so far.

In a press release last month, Duolingo announced its fifth round of private funding (dubbed "Series E"). Raising $25 million, Duolingo now boasts an implied valuation of $700 million -- not bad for a company with only 95 employees.

There are two things worth noting here. First, Duolingo is now within spitting distance of "tech unicorn" status. $300 million more, and its valuation will pass the $1 billion valuation that Wall Street colloquially refers to as making a private company "rare as a unicorn." (Although such unicorns, valued at $1 billion and up, are getting less rare by the day).

The other noteworthy thing is what raising all this capital has done to Duolingo's ownership structure. Since starting work in 2011, Duolingo has raised capital five times:

What has all this money done to Duolingo's ownership? Last month's $25 million capital-raise, at an implied valuation of $700 million, means that Duolingo sold off 3.6% of its stock in that round. Series D was done at a valuation of $470 million, parting with another 9.6% of Duolingo's stock. As for Series C through A, we don't know precisely how much stock was involved in those funding rounds individually, but Pitchbook estimates that in aggregate, those first three funding rounds saw Duo part with 44.5% of its equity.

Add this to the two latest funding rounds and we arrive at a total: Duolingo has sold off 57.7% of its stock to private investors, and is now majority-owned by those outside shareholders. 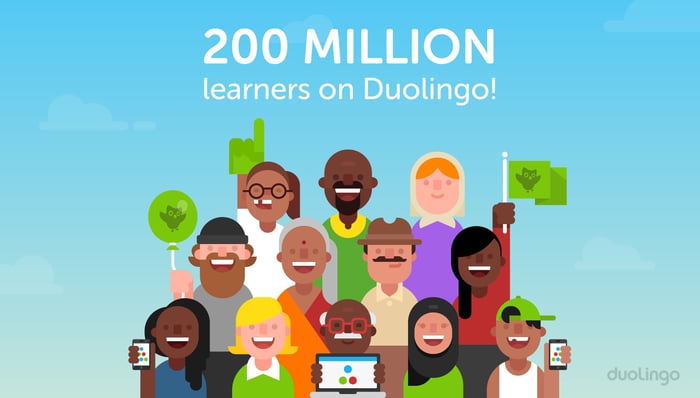 What it means to (the rest of us) investors

Logically, Duolingo's new majority shareholders are going to want to see a return on their $108.3 million at some point -- possibly by selling Duolingo to another company (much like von Ahn sold his previous company, reCAPTCHA, to Google in 2009), or possibly by putting the company up for IPO.

If Duolingo goes the second route, should you buy it?

That's hard to say, because as a private company, we still don't know a lot about Duolingo's finances. In a blog post on Duolingo last year, von Ahn confided that Duolingo is spending about $42,000 per day on its operations, and that these costs are "going up with our number of users." Clocked at 150 million users in July 2016, Duo's user base has grown "only" 33% over the past year, though, which suggests that annual operating costs today might still be as low as $20 million or so. ($42,000 x 365 days x 33% growth).

To cover these costs, Duolingo has begun "experimenting" with ways to monetize the service. Placing "a small non-intrusive ad at the end of a lesson," for example, has probably already gone "a long way toward breaking even." Still, von Ahn avers that his goal with Duolingo remains "to provide free language education to the world." So it's unlikely Duolingo is going to become some kind of wildly profitable tech venture anytime soon.

That said, von Ahn reassured Duolingo's users last year that the company was not in any "financial trouble." Duolingo fans can probably rest assured: if and when it becomes time to IPO Duolingo, there should still be a Duolingo around to IPO.