When Amazon (NASDAQ:AMZN) introduced the Echo smart speaker late in 2014, some critics called it an unnecessary device. But the Echo actually expanded the company's e-commerce ecosystem into homes, making it easier to order products from Amazon, use its streaming services, and control other connected devices.

Amazon's first-mover advantage has given it an edge against Alphabet, Apple, and Microsoft -- which have all introduced their own smart speakers. Research firm eMarketer estimates that this year, 35.6 million Americans will use a voice-activated assistant device at least once per month -- a 129% increase from last year -- and believes that Amazon will control 70.6% of the smart speaker market. (This forecast predates the announcement of the HomePod, which won’t be released until December of this year.) 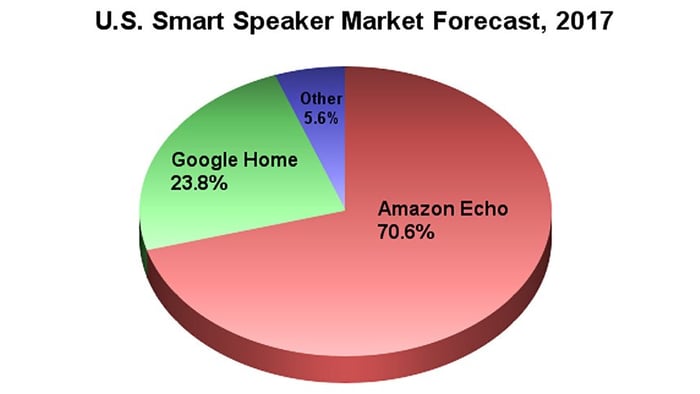 The Echo's success has spawned a family of devices, including the puck-sized Echo Dot, which requires an external speaker; the Tap, which is activated by a button; the Echo Look, which adds a camera for selfies and fashion recommendations; and the Echo Show, which adds an LCD screen for video calls. And Amazon could sell many more Echo speakers in the future: Global Market Insights expects worldwide smart speaker revenue to soar from $400 million in 2016 to $13 billion in 2024.