An actual turnaround at Fitbit (NYSE:FIT) may take some time, but investors bid up the shares last week after the activity-monitoring wearables maker posted better-than-expected financials and slightly boosted its full-year outlook.

The second quarter was rough on a year-over-year basis. Revenue plummeted 40% to hit $353.3 million. This is the former market darling's third quarter in a row of double-digit declines on the top line. Fitbit's profitability a year earlier was reversed, as bottom-line results clocked in at a loss of $0.23 a share -- or a deficit of $0.08 a share on an adjusted basis. However, analysts were bracing for an adjusted loss of $0.15 a share on just $341.6 million in revenue.

The numbers aren't great, but the stock is also trading at a little more a third of where it was a year earlier. Fitbit stock has plummeted 89% since peaking two summers ago, shortly after going public. Frame Fitbit's performance correctly and it's not a shabby showing based on the stock's present valuation. 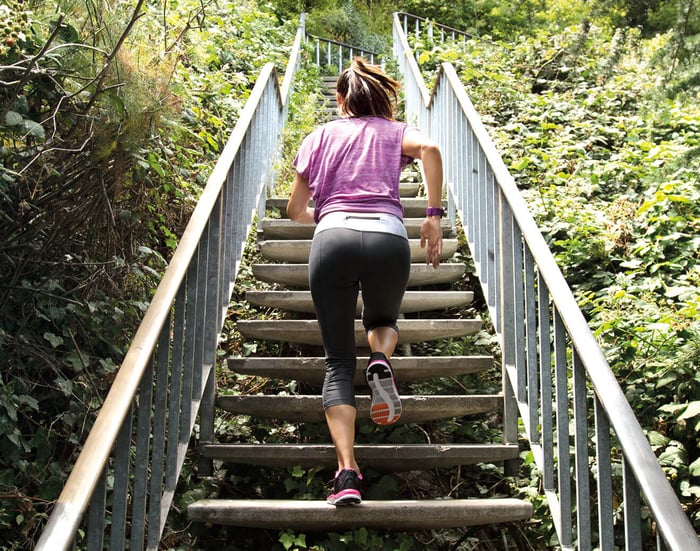 The road back has many steps to take

There was sequential improvement at Fitbit. The 3.4 million devices it sold during the second quarter were 14% more than it cleared during the first quarter. Average selling prices also inched slightly higher sequentially.

Benchmark analyst Scott Searle put out an encouraging note following the report. He is sticking to his bullish buy rating on the stock, fortified by the unexpectedly strong financial results. Searle also points out that Fitbit confirmed that its new smartwatch -- a major rollout as it will diversify revenue streams and boost average selling prices -- is still on track to be introduced in time for this year's holiday shopping season.

Sustaining last week's gains will be the real trick. Fitbit stock rose 12% the day after it posted better-than-expected results in this year's first quarter, only to give back more than all of those gains in the three months that followed. Even last week's rally rings a bit hollow. The stock rose 15% on Thursday -- the day after its report -- but the shares fell in each of the week's four other trading days. Poor Fitbit feels like the Rodney Dangerfield of the investing world. It can't get any respect.

Searle is one of the few analysts giving Fitbit some love, and his $10 price target suggests 78% of upside even after last week's rally. The robust results should also arm bulls with sweet revenge, as Cleveland Research analyst Ben Bollin had lowered his top- and bottom-line estimates below Wall Street averages just a week before the report. Sequential improvement and well-received new products are the key to Fitbit's turnaround, but keeping investors interested beyond its quarterly updates is the real challenge now.