Getting an encore performance from Ormat Technologies (NYSE:ORA) this past quarter wasn't likely after its impressive first quarter. This past quarter was good enough in its own right, though. The company continues to operate its geothermal power stations well, and its power plant equipment sales remained steady. The only thing it needs now is more customers to which it can sell power, and Ormat got just that this past quarter.

Let's take a look at the most recent quarterly results as well as a new deal the company signed to ensure growth for the next several years. 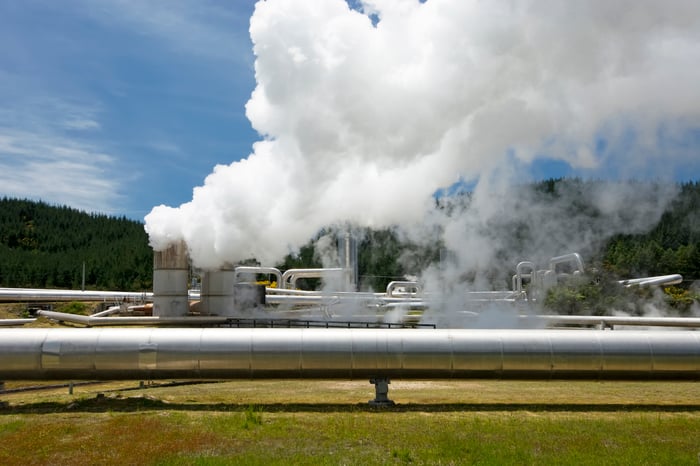 Ormat's first-quarter results were going to be hard to replicate. Both its electricity generation and product sales business segments posted all-time highs, and several product sales slated for the fourth quarter of 2016 got pushed into the first quarter. Since Ormat's product revenue is a lumpy business, we can forgive the company for not hitting the same highs it did in Q1.

Overall, though, this quarter held serve. Revenue and earnings are up compared to this time last year in both business segments, and gross margins for electricity were up to 41.5%. Like the first quarter, the one blemish was a sharp drop in gross margins for its product segment. This time around, lower margins were the result of higher-than-anticipated costs for its project in Chile and product mix. A gross margin of 35.7% is nothing to sneeze at, but the company has shown it can do better.

The big news event this past quarter was when Ormat signed a long-term power purchasing agreement with the Southern California Public Power Authority (SCPPA), Under the agreement, Ormat will sell SCPPA 150 megawatts of electricity for 26 years at a fixed price of $75.50 per megawatt-hour. As it stands, Ormat doesn't have enough uncontracted, U.S.-based facilities to deliver that much power. So even though the deal kicks in starting in the fourth quarter of 2017, Ormat has until 2022 to get additional facilities up and running.

Also, the company closed the transaction and made changes to the board of directors related to the strategic partnership with ORIX Corporation (NYSE:IX). This deal gives Ormat exclusive rights to develop, own, operate, and provide equipment for any future ORIX geothermal project outside of Japan. This partnership will give Ormat a tremendous foothold from which it can expand operations in the Asia-Pacific market.

In Ormat's press release, CEO Isaac Angel commented on the recent deals with SCPPA & ORIX and the opportunities they present down the road, saying:

This portfolio PPA [pwer purchasing agreement] will enable both the development of multiple new projects as well as the sustainable operation of several of our existing geothermal power plants. With the SCPPA portfolio PPA in place, Ormat is well positioned for consistent growth in the US. Another recent noteworthy development is that with the closing of ORIX's acquisition of an approximately 22% ownership stake in Ormat, the Commercial Cooperation Agreement that Ormat and ORIX executed in connection with that acquisition became effective last week, and we expect that it will expand our business opportunities in Asia and other key geographies and may also improve our access to capital.

When Ormat sticks to its knitting, the company looks like it is doing well. It has a suite of development projects that now have a built-in customer in the U.S. and a partner in the Asia-Pacific region to finance and develop new geothermal power plants. All of these things appear to be on the right track.

The variable that isn't accounted for here is the company's venture into energy storage. On the fourth quarter, it acquired an energy management and demand response software company. There aren't too many overlaps between this business and its bread and butter of developing and owning geothermal plants. We can only hope that management doesn't get too distracted by this small business and focuses on what it does well instead.