Shares of Southwest Airlines (NYSE:LUV) fell 11% in July according to S&P Market Intelligence due, in large part, to what investors interpreted as a lackluster second-quarter earnings report. Unswayed by the company's record quarterly earnings per share, excluding special items, investors sent the stock on a sharp reversal in course as shares had soared more than 24% from the start of the year through June.

Besides reporting all-time high EPS, the company also booked record quarterly passenger and operating revenue. However, investors were not impressed. The company also reported a precipitous 33% year-over-year decrease in operating cash flow. Due, in part, to higher fuel costs and the unfavorable effect of the conversion to a new reservation system, total operating expenses rose 9.4% compared to Q2 2016. 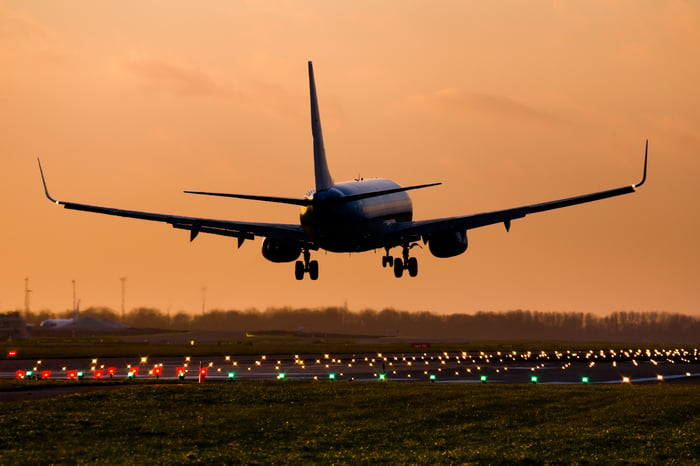 Besides the second-quarter results, investors were frustrated with news that the higher-than-expected costs associated with the implementation of the new reservation system would continue to adversely affect the company in the third quarter. According to the company's press release, the transition to the new reservation system will unfavorably affect operating unit revenue about 1% compared to Q3 2016. This is expected to result in revenue per available seat mile (RASM) growth of approximately 1% year over year -- a decrease in performance compared to the 1.5% RASM year-over-year growth the company reported for Q2 2017.

The company's woes in converting to the new reservation system weren't the only cause for concern. Investors were also unhappy with management's report that capital expenditures were expected to remain flat or only slightly improve in 2018 over the expected $2.3 billion in fiscal 2017.

Despite the forecasted turbulence in the third quarter, the company expects the challenges with the conversion to the new reservation system not to affect the company's fourth-quarter results. In fact, later in the company's press release, Gary C. Kelly, Southwest's Chairman of the Board and Chief Executive Officer, stated that the company's "goal to grow annual 2017 unit revenues remains intact." Elaborating further on the expected results for the year, Kelly said, "We continue to expect the annual incremental benefits from the new reservation system capabilities to ramp up to an estimated $200 million in pre-tax profits in 2018."

Investors don't need to only take management's optimistic outlook for the company's near future as evidence that Southwest is poised for success. For example, the company is in the process of transitioning its fleet to more fuel-efficient planes, which will help the company reduce its fuel expense and expand its operating margin. By the end of the third quarter, the company expects to have retired the 67 Classic aircraft that now exist in its fleet. This, in addition to other initiatives, suggests that Southwest has clear skies ahead, and the company remains one of the better options for those looking to invest in an airline.