Selling tires hasn't been the best business to be in so far in 2017. In Cooper Tire & Rubber's (NYSE:CTB) most recent earnings report, the company indicated that it is facing many of the challenges that punctured its first quarter earnings as well.

Here's a quick rundown of Cooper's most recent results, the industry factors working for and against the company, and what investors should be looking for in the coming quarters. 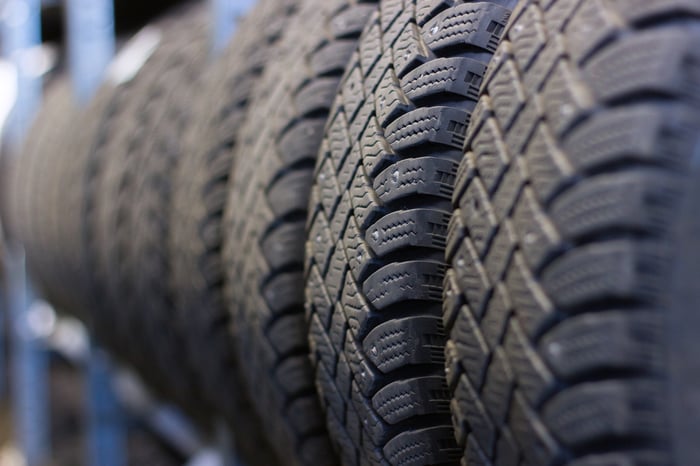 Many of the market problems that Cooper faced in the first quarter reared their respective heads again in this quarter. Higher material costs, steep pricing & promotion activity among retailers, and high inventory levels for light vehicle aftermarket tires in North America all cut into profits. For the most part, these are things that are out of the company's control.

The good sign is that, despite the weakness in the North American market, Cooper was able to make headway with its other businesses. Truck and bus radial tires (TBR) was the fastest growing business with a year over year unit sale increase of 27.4%. Also, sales in its international segment were up 11%.

The company burned through quite a bit of cash in the quarter, but much of that has to do with a significant working capital build that will likely get drawn down over time. Management felt comfortable enough with the company's results to buy back $20 million worth of shares. Ever since the company started its buyback program in 2014, management has repurchased 13.7% of shares outstanding. The board also authorized another $300 million in share repurchases between now and 2019.

In the company's press release, CEO Brad Hughes discussed some of the troubles Cooper faced in the first quarter and how it plans to respond to those market forces in the coming quarters.

The tire industry continues to face turbulence in the U.S. market in the form of raw material cost variability, weak trends in retail sell-out of tires to consumers, elevated inventory in the channels and a fluid pricing and promotional landscape. As we continued to respond to these challenges and remained market facing with pricing and promotions, Cooper improved volumes in the U.S. from the first quarter to the second quarter. Importantly, we ended the quarter on a strong note, growing U.S. volume over the prior year and outperforming the industry in June. Cooper also achieved strong year-over-year second quarter unit volume increases in Latin America and Asia, as well as in truck and bus radial (TBR) tires.

Current industry conditions are likely to persist into the third quarter, and Cooper will continue to manage our inventory levels in line with demand. Raw material costs are trending down at present, but may remain volatile, and we expect that uncertain consumer demand may contribute to continued high levels of promotional activity. In this environment, we will remain market facing in our pricing and promotions and expect to deliver year-over-year unit volume increases in both the Americas and International segments in the second half of 2017.

For the rest of the year, Cooper's management expects its operating margin to land on the high end of its 8% to 10% range. The effects of higher material costs will subside as management can pass on higher prices to customers. The one question is when Cooper will be able to translate its fast growing sales in the Asia Pacific region into a highly profitable business. The company recently purchased a majority stake in a Chinese tire company to help it grow sales, but those sales will have to start generating better than low single digit margins to justify the investment there.

Selling tires is a rather low margin, low growth business, so returning capital to shareholders via share repurchases and dividends is going to be a major component of an investment thesis in Cooper. With Cooper's shares trading at a price to earnings ratio of 9.8, it seems like now is as good a time as ever to buy back shares.