Take a look at Mondelez International's (NASDAQ:MDLZ) largest shareholder list and you'll find typical large institutional holders such as BlackRock, a New York-based money manager that owns 5.8% of the shares, and The Vanguard Group, manager of the Vanguard mutual funds which owns 6.2%.

Why activists have targeted Mondelez

These activist investors have targeted Mondelez because they see it as underperforming its peers in the food and beverage industry. In a July 2013 white paper, Trian made the case for why PepsiCo and Mondelez should merge to create a global snack powerhouse and improve margins from cost savings and revenue synergies. Trian saw Mondelez's 17% operating margin excluding marketing expense as too low compared to its peer average of 25% based on an average of other top food and beverage brands including Coca-Cola and The Hershey Company. Mondelez's margin continued slide, all the way down to 12% in 2013.

Later in 2015, Bill Ackman's Pershing Square disclosed a $5.5 billion stake in Mondelez citing similar reasoning to Trian. In Pershing Square's 2015 shareholder letter, the case was made that Mondelez had the largest opportunity for margin expansion in the large cap consumer packaged goods sector.

The influential voices from these major shareholders seem to have achieved the intended objective. Following the investment of Trian, Mondelez management laid out a plan to expand operating margin to 15%-16% through 2016 by cutting unnecessary costs. Management delivered, achieving an adjusted margin of 15.3%, excluding the impact of currency and other one-time costs. Management is now targeting an adjusted operating margin of 17% to 18% by 2018, which appears well within reach given Mondelez's first quarter 2017 margin of 16.8%.

Over the last five years, Mondelez stock is up 72% -- slightly higher than the return of the iShares Dow Jones US Consumer Goods ETF -- but trailing the S&P 500's return of 80%. Large cap global food companies have dealt with currency headwinds and a consumer shift away from heavily processed foods, both of which have caused sales growth to slow dramatically in recent years. 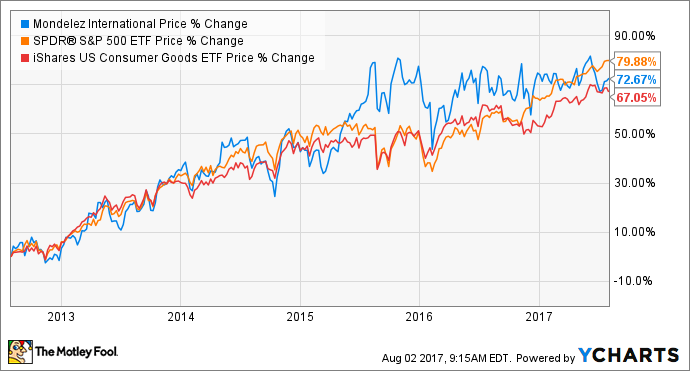 The only thing providing a lift to Mondelez stock right now is cost cutting and margin expansion. In 2016, organic net revenue growth was only 1.3%, but margin expansion provided a huge boost to the bottom line with adjusted earnings per share growing 24% over 2015. Overall, the influence of Trian and Pershing Square has to be seen as a positive for Mondelez, but at some point, Mondelez will need to get the top line growing faster to keep the stock moving higher, since margins can be improved only so much over time.