Genuine Parts Company (NYSE:GPC) isn't a household name for most Americans, but the company's business has been extremely successful over time. The company behind the Napa Auto Parts business has been able to string together decades of strong performance, combining share price appreciation with lucrative dividend payments to its shareholders. Some worry that the maker of automotive and industrial parts might not be able to do as well as it has in the past, and income investors want to be sure that the company's dividend is safe. The following analysis looks at Genuine Parts and whether dividend investors can count on its payouts going forward.

Genuine Parts has a dividend yield of 3.2% right now, which is more than half what you'll find from the S&P 500 overall. That yield is near the top of the typical range that Genuine Parts has seen in recent years, having risen from as low as 2% when the stock was at all-time highs back in late 2014. More recently, a pullback in the share price has been primarily responsible for the boost in yield, with rising quarterly payments also playing a role.

Genuine Parts has seen its earnings plateau over the past couple of years after having posted extreme growth during the early 2010s. As a result, payout ratios have climbed gradually, rising from percentages in the mid-40s to the current level approaching 60%. Even though the current figure is relatively high for Genuine Parts, it isn't so high as to cause immediate concern for investors. Relatively strong performance even in a weak period for auto parts specialists generally point to the potential for earnings growth in the future, and that would help push payout ratios back downward.

Few companies match Genuine Parts for its dedication to dividends. The company has boosted its payout annually for 61 straight years, including a 3% rise earlier this year. Genuine Parts is a Dividend Aristocrat, having earned the mark of prestige decades ago. Although dividend growth rates have slowed in the past year compared to what the company did during most of the 2010s, Genuine Parts still has the upward momentum to carry its dividends higher in the future. 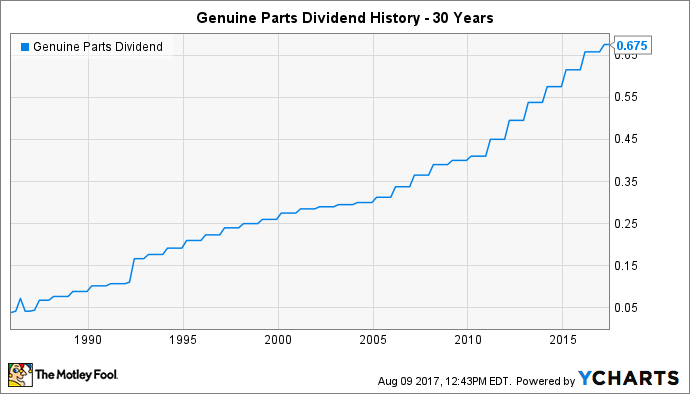 What's ahead for Genuine Parts?

The primary concern that investors have about Genuine Parts is that the auto industry has been extremely favorable for years, and so any reversal of that good fortune could cause a more dramatic financial hit than auto parts stores have already seen. Moreover, rising competition has some investors scared as well. Yet some of the sluggishness that the industry has seen has stemmed from unusually mild winter weather over the past two years, and that will eventually give way to more normal conditions that require vehicle owners to do more remedial maintenance. When that happens, Genuine Parts will be ready, and the pickup in business will support stronger earnings and give more latitude for the parts maker to consider future dividend increases.

Be smart about your dividends

Genuine Parts has built up a nearly unparalleled track record in giving its long-term shareholders steady, reliable, and ever-growing dividend payments over time. As a company that's fully exposed to the ups and downs of the automotive business cycle, Genuine Parts has survived past downturns without their having threatened its ability to keep paying higher quarterly dividends. Even if a feared slowdown comes to pass, Genuine Parts has the experience and dedication to stay focused on business fundamentals and find a way to keep its dividend going.