After a complaint was filed in federal court alleging that Dunkin' Brands' (NASDAQ:DNKN) Dunkin' Donuts' steak sandwiches do not actually contain "steak," a new suit makes similar charges about its blueberry bakery items. The lawsuit, which was filed in United States District Court in the Northern District of Illinois Eastern Division, was filed by attorneys for Bartosz Grabowski "and on behalf of all others similarly situated." It seeks class action status. The plaintiff claims that the coffee chain's various blueberry-named bakery products, including Glazed Blueberry doughnuts, Blueberry Butternut doughnuts, and Blueberry Crumb Cake doughnuts, contain imitation blueberries "that highly resemble actual blueberries due to their round shape and blue color."

Lawyers claim that if their client had known the products did not contain blueberries, he either would not have purchased them or would have paid significantly less for the products. They seek in excess of $5 million to remedy the situation. 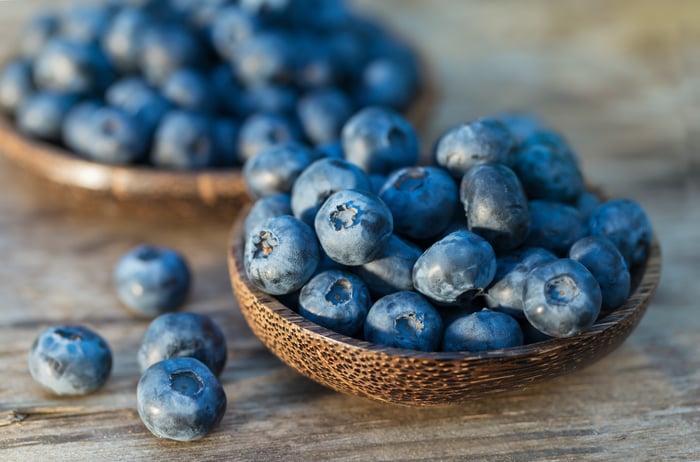 Dunkin' Donuts does not list blueberries as an ingredient in its blueberry doughnuts. Image source: Getty Images.

What's in the doughnuts?

The lawsuit contends that blueberries have health benefits that consumers would be willing to pay more for. It also notes that when buying a doughnut in-store, consumers see the blueberry doughnuts displayed alongside other products, including various doughnuts and muffins, that contain the fruit they are named for.

Food lawsuits have become common in recent years with Subway being sued over its sandwiches not being the size advertised while Starbucks (NASDAQ: SBUX) has been sued multiple times over whether it fills its drinks properly. While Starbucks has either won its cases or seen them dismissed, Subway did have to pay up to $525,000 in attorneys fees, and take steps to ensure its 12-inch sandwiches actually measure 12 inches.

In the case of the Dunkin' suit, the case is a little different because it involves whether it's OK to call a product "blueberry" when it contains no blueberries. There is some precedent for this as certain beverage products marketed using fruit names do list how much (or how little) actual juice they contain.

If this case proceeds, it's possible that Dunkin' may have to change its marketing for these products. Given the past history of lawsuits like this, it's somewhat unlikely the plaintiffs will receive a large cash payout. That's because while the lawsuit makes a case for the benefits of the fruit, noting that "blueberries have the potential to limit the development and severity of certain cancers and vascular diseases," it's highly unlikely anyone specifically seeking those health benefits does so through doughnuts.