Skyworks Solutions (NASDAQ:SWKS) reported yet another impressive earnings performance as it easily surpassed Wall Street's estimates for the third quarter of the fiscal year 2017. The semiconductor specialist further boosted investor sentiment thanks to a strong fourth-quarter guidance, indicating that any potential delay in iPhone production won't have any impact on its performance thanks to the increasing diversification of its top line.

But there's more to a company than just the quarterly earnings numbers and the guidance. As such, investors should pay closer attention to the key trends that will affect Skyworks' long-term performance, and here are some of them highlighted in the recent earnings call. 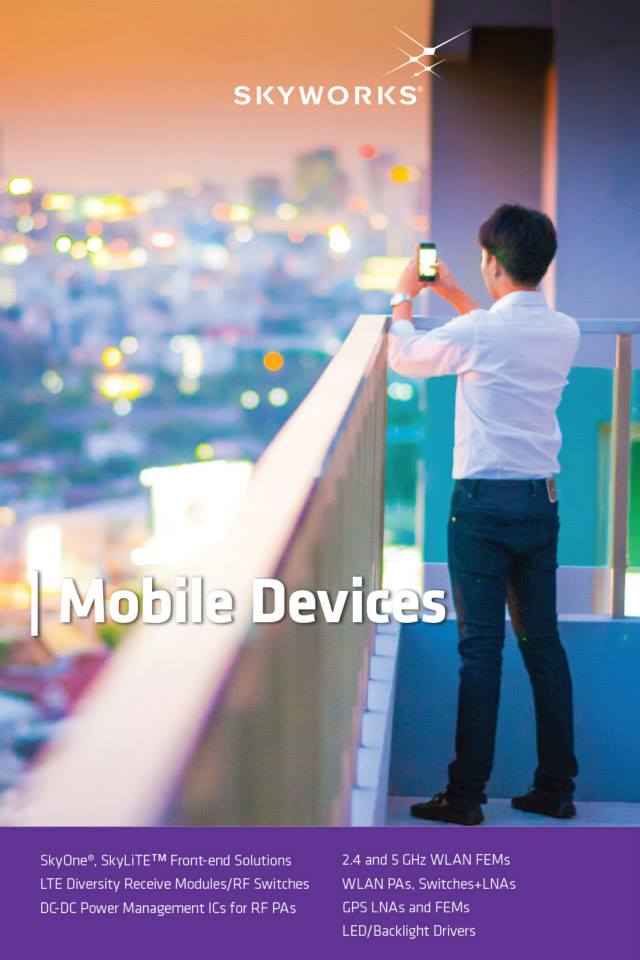 Skyworks is aggressively diversifying its business

Skyworks Solutions is a well-known Apple (NASDAQ:AAPL) supplier. Cupertino accounts for around 40% of the chipmaker's revenue. But the company has been trying to diversify its revenue streams and reduce customer concentration, which is a smart move considering the fate of certain Apple suppliers.

The good news is that Skyworks has been successful in its ventures so far by landing chip content at Chinese smartphone OEMs (original equipment manufacturers) such as Huawei, while also supplying chips for emerging applications such as virtual assistants and smart homes. In fact, the company believes that its revenue from broad markets excluding smartphone applications will exceed an annual run rate of $1 billion during the fourth quarter, thanks to the growing adoption of its Wi-Fi, LTE, and ZigBee solutions.

Currently, the broader markets segment (excluding mobile applications) supplies 27% of Skyworks' overall revenue, but this could get bigger in the long run due to the growing adoption of Internet of Things-based applications. For instance, the company has now started volume shipments of modules based on the 802.11p Wi-Fi standard for communication between vehicles. This sets Skyworks on the way to tap a market that could potentially reach $22 billion in revenue by 2023, as per Global Market Insights.

On the other hand, the market for ZigBee-enabled home automation devices is anticipated to grow at an annual pace of 26% until 2020 according to one estimate. Skyworks is trying to tap this space by making ZigBee and Wi-Fi devices for Amazon's virtual assistant platform, which is a smart move as the e-commerce giant reportedly controls  70% of the voice-enabled speaker market.

Therefore, investors can expect Skyworks' business to continue diversifying beyond mobile. However, one shouldn't forget that Apple is still a sizable part of the company's business and it will play a vital role in deciding its financial fortunes.

Skyworks management didn't throw specific light on Apple's iPhone production schedule for the year, though CEO Liam Griffin did say that the company is witnessing  a "predictable cycle with our largest customer." Rumors have been flying thick and fast that Cupertino could be forced to delay the production of its OLED iPhones because of supply chain issues, but Apple's latest quarterly report indicates that things are on track.

The smartphone giant reported better-than-expected fiscal third-quarter results and its fourth-quarter guidance calls for revenue between $49 billion and $52 billion. This is higher than the consensus forecast of $49.2 billion, which is good news for Skyworks investors as the company is going all out to land more content inside Apple's next-generation iPhone(s).

Skyworks is set for margin growth

Skyworks Solutions' margin profile has been waning for the past few months, but this seems to be changing now. The company's non-GAAP gross margin came in at 50.7% last quarter and is expected to go up to 51% during the ongoing quarter. Additionally, its operating margin increased  30 basis points sequentially, with Skyworks forecasting further expansion during the fourth quarter.

This indicates that Skyworks' expansion into new markets, and its tight relationship with Apple, will have a positive impact on the company's margin. As a result, the company's potential earnings for the fiscal year 2017 could jump to $6.38 per share as against $5.57 per share last year. What's more, analysts expect  Skyworks to log double-digit annual earnings growth for the next five years, setting the stage for more upside thanks to improved earnings power.

Therefore, Skyworks Solutions' latest quarterly report makes it clear that the company is pulling the right strings to secure its long-term growth. So, investors should keep holding the stock for more upside to come, despite gains of almost 40% in 2017.