Twenty-First Century Fox (NASDAQ:FOX) (NASDAQ:FOXA) reported fourth-quarter and full-year earnings results on Aug. 9, delivering quarterly earnings per share 3% higher than the average analyst estimate on sales that were slightly below the consensus target. Here's a look at the company's full-year sales and earnings performance compared to the prior year:

Read on for a deeper look at Fox's earnings results and future outlook, including quotes from its recent conference call courtesy of Thomson Reuters. 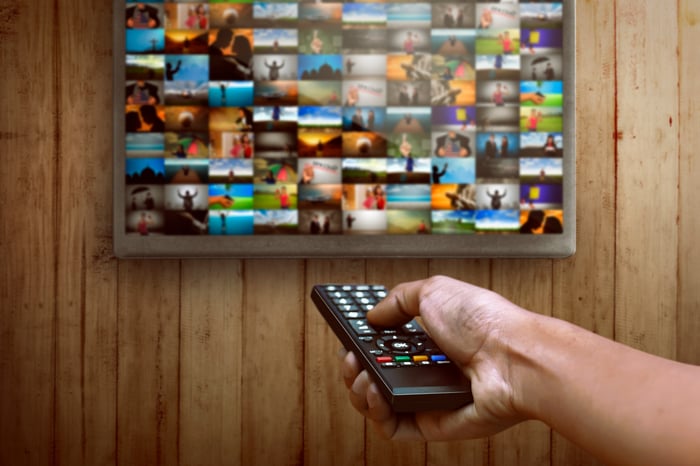 Strong performance for sports content and Fox News helped propel fourth-quarter operating income for the company's cable networks segment up 19% year over year on a 10% sales increase, and Fox believes that its programming mix puts it in good position to navigate the shifting pay-TV landscape. Executive Chairman Lachlan Murdoch explained the advantages provided by the company's strength in news and sports content:

In news, the FOX News Channel was the most-watched cable network for the last 12 months, during which it achieved its highest-rated quarter ever in 24-hour viewership. We believe that as time-shifted, on-demand, and ad-free continue to grow in popularity, our strengths in live news and sports globally is a great advantage. News and sports, the least likely programming to be watched delayed, comprised more than half of our advertising revenues. In fact, network entertainment programming, while important, accounts for less than 3% of our total revenue.

Murdoch also touted recent creative successes, having produced No. 1 shows on five networks in 2017 and scoring hits with This Is Us, Legion, and Feud. Sports and news look to be the company's key TV assets, but narrative programming will continue to be an important part of Fox's operations.

Weak performance for the company's film wing was a drag on both fourth-quarter and full-year performance. In the recently reported quarter, film segment sales fell roughly 11% year over year. CFO John Nallen gave some context on the segment's performance in the fourth quarter:

At the film segment, we faced difficult comparisons to a year ago. This quarter, we reported an EBITDA loss of $22 million versus $164 million in profits a year ago. This quarter included significant releasing costs for our summer movie slate, including War for the Planet of the Apes and Alien: Covenant, whereas last year, we had very substantial contributions from Deadpool and The Martian and significantly higher pay-TV avails from the timing of prior releases. Additionally, this year, we had lower TV library contributions from international markets.

War for the Planet of the Apes released on July 14, and, as such, did not contribute sales to Fox's fourth-quarter results. Unfortunately, both Apes and Alien: Covenant have delivered disappointing sales at the box office and look to be significant underperformers for the company.

While the film segment has recently suffered setbacks, the drop-off in fiscal performance was less dramatic on a full-year basis, with sales and operating income both down around 3% year over year.

Fox is showing resilience amid cord-cutting

Some 941,000 subscribers cut the cord with pay TV in the second quarter, according to one estimate, and the cord-cutting trend continues to present a substantial threat to Fox's advertising and affiliate revenues. Lachlan Murdoch explained how Fox's subscription numbers are holding up amid industry trends:

And while it's true the broader industry lost approximately 2% of subscribers over the last year, we have maintained our aggregate subscriber level. This includes subscriber additions from all of the emerging [digital multichannel video programming distributor] products, including from the newest launches, YouTube TV and Hulu Live, as well as growth in our younger channels.

While getting its offerings into digital multichannel video programming distributor (DMVPD) products is certainly welcome news for Fox, it's worth pointing out that bundling channels in these packages is typically less profitable than in the standard cable television subscription. The role that "growth in younger channels" played in maintaining the company's aggregate subscription levels is also worth noting, as it suggests that the company's total number of subscribed households has eroded but that more Fox channels have entered remaining subscription packages. Losing a Fox News subscriber while adding a young channel like FXX to an existing package maintains the company's subscription levels but results in substantially lower ad and affiliate sales.

Still, even though cord-cutting is putting pressure on results and remains an ongoing threat, it's clear that Fox's cable networks segment is holding up well for the time being.

Fox is exploring a variety of distribution options

The company is tackling over-the-top distribution by making its content widely available and getting its core channels included with offerings like Dish Network's SlingTV and Alphabet's YouTube TV, and also by launching its own dedicated offerings. Fox recently announced a partnership with Comcast to launch FX+, an ad-free subscription service that includes FX and FXX programming at a $6 monthly rate. CEO James Murdoch also stated that the company is looking at Hulu as a more beneficial distribution partner for some of its content than Netflix going forward. He described the company's outlook on subscription video on demand (SVOD) distribution:

We continue to see a competitive marketplace from product there, but we also want to make sure that we're licensing things that -- in a way that's consistent with our strategy of making things ... more available and not less. So monolithic, global, exclusive deals with Netflix are troublesome with that strategy. And we think there's a broader marketplace for us to license into. Hulu is a very attractive customer and partner of ours.

Fox owns a 30% stake in Hulu, so shifting more content to the streaming service would seem to be a smart move so long as the platform continues to add paid subscribers at a healthy clip.

With fiscal 2017 in the books, attention naturally turns to how Fox will fare in the current fiscal year and beyond. Here's what Nallen said about the expected performance for the company's cable networks segment:

At our cable networks, the momentum seen in this past quarter will carry into fiscal 2018. We expect every quarter in fiscal '18 will show at least high-single-digit domestic affiliate fee growth and our confidence in this, our largest revenue stream, is underpinned by locked-in contracts. Internationally, we're expecting strong total revenue growth, driven by STAR advertising increases, where we'll continue to generate market-leading organic ad growth, we'll lap the impact of the demonetization policy and we'll hit the $500 million EBITDA milestone.

With regards to costs on the cable networks side, the company anticipates that content costs for its current programming and the addition of Big Ten college sports coverage and broadcast rights from the Argentine Football Association will drive a high-single-digit expense increase.

In the television segment, Fox expects an unfavorable comparison due to not being the broadcast partner for the upcoming Super Bowl, carrying one less NFL playoff game, and because it's unlikely that the Major League Baseball World Series will match the drama of last year's seven-game showdown between the Chicago Cubs and the Cleveland Indians.

Nallen described the lineup for the television and movie content in the company's film segment for the year as "promising" and pointed to Deadpool 2 as a key release. The company also recently acquired mobile video game developer Aftershock for roughly $800 million, and indicated that operations for the studio will add to film segment expenses for the current fiscal year.