Zynga (NASDAQ:ZNGA) recently delivered its first profitable quarter in nearly five years, and shares of the company are up roughly 40% year-to-date. After trying to find its footing in the mobile market for years, the market appears to have new faith in the company under the management of CEO Frank Gibeau -- who became the company's top executive in 2016 after previously heading up the mobile unit at Electronic Arts (NASDAQ:EA).

In addition to returning to profitability, last quarter saw the company deliver its best sales in five years, with mobile games delivering a record 86% sales contribution. The table below illustrates some of the other progress that the company has made in mobile by comparing its recently delivered second-quarter results to the prior-year period:

Zynga's recent focus on boosting monetization from its existing properties is making for good short-term results and has fueled the stock's recent rally, but long-term the company still has some major issues to overcome. 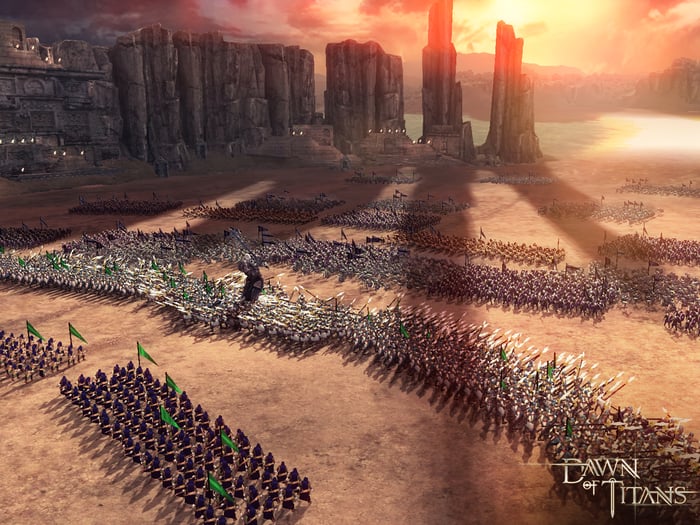 Mobile strategy game Dawn of Titans hasn't been the success that Zynga would have liked; Image source: Zynga.

Under Gibeau's direction, Zynga is working on delivering content updates for franchises including Zynga Poker, Words With Friends, and CSR Racing in order to extend their product life cycles. Keeping players engaged with these franchises is a promising way to generate high-margin sales without the risky development expenses associated with creating new titles, but, eventually, the company will need to introduce new hit franchises.

While Zynga has had considerable success using the data at its disposal to drive monetization for its core properties, the company has a poor track record when it comes to internally developing new hit properties. The company's most recent quarterly report showed strong results for CSR Racing 2, but even CSR Racing was the result of the company's $527 million acquisition of NaturalMotion -- a deal that looks pricey even given the racing game's recent success.

Even proven concepts have come up short for Zynga recently. Here's a quote from the company's most recent earnings call when asked why deferred revenues came in below expectations:

As it relates to Q2, when we were setting our guidance, the expectation is we would see a -- even though there were small, more of a contribution from our new releases, Crosswords and Boggle, those delivered less than we expected, so that obviously played into the build of deferred revenue as you normally expect that from your newer games.

Dawn of Titans, another game from Zynga's NaturalMotion studio, spent roughly five years in a trial release phase before finally getting an official release at the end of 2016, but, it seems unlikely that it will have much staying power based on the game's performance on the App Store charts. Launching new titles in the crowded mobile market is challenging, but, even so, Zynga's track record is not encouraging.

A closer look at the competition's strengths

Zynga's disadvantages compared to other major video game companies aren't limited to developing new intellectual properties. Not only has the company had difficulty creating new hit games, but its existing core franchises are significantly less potent than those driving the leaders in the increasingly competitive mobile space.

Activision Blizzard's (NASDAQ:ATVI) King Digital wing successfully parlayed its Candy Crush Saga success into a spinoff hit with Candy Crush Soda Saga, and the two titles have now both placed in the top-10 of U.S. mobile app stores for 15 consecutive quarters. Similarly, Tencent Holding's Supercell mobile development wing has followed 2012-release Clash of Clans up with Clash Royale in early 2016 and both games continue to rank in the top-10 grossing games on Apple's App Store.

Like Activision and other traditionally console-oriented games publishers, Nintendo (OTC:NTDOY) is now more actively pursuing game development on smartphones and tablets and has branched its massively popular Pokemon franchise into the mobile sphere with Pokemon Go -- which recently saw its biggest day of player spending since the game's July 2016 launch.

Nintendo and Activision Blizzard have a wealth of viable franchises that could, and will, make the transition to mobile, and each company also has a great track record of coming up with successful new video game properties. Meanwhile, Electronic Arts has big brands including FIFA, Star Wars, and Battlefield to leverage in the space, and all of these companies have substantial development and marketing advantages compared to Zynga.

Outside of CSR Racing and titles in the slots category, the core games behind most of Zynga's major revenue drivers are roughly a decade old. It's a credit to the company that titles like Zynga Poker and Words With Friends have had such staying power (though sales for Words were down 17% year-over-year last quarter), but Zynga faces big risks if it can't improve its ability to create new hits over the next decade.