But it looks like investors were expecting something more from a company that has set the stock market on fire, rising more than 160% in the past year. The market took issue with the "weak" growth in NVIDIA's data center and automotive segments, which fell short of analyst expectations.

However, a closer look at NVIDIA's latest financials will make it clear that both the automotive and data center segments are growing at an impressive pace, and they could form the cornerstone of the company's long-term success. Here's why. 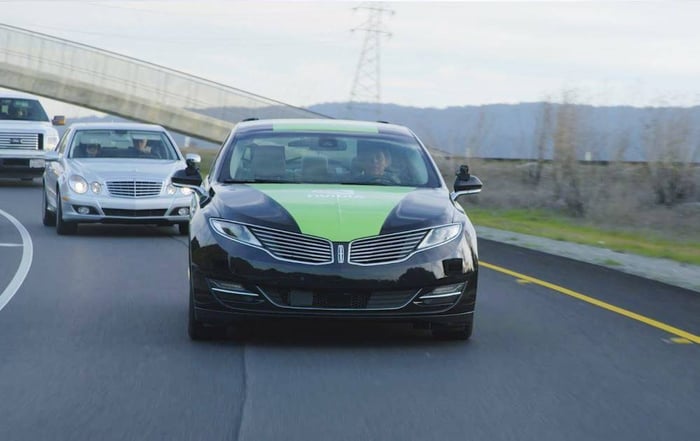 NVIDIA has made a big dent with its graphics processing units (GPUs) in the data center space. Its revenue from this segment rose from $151 million in the prior-year period to $416 million in the latest quarter, but this wasn't enough as the expectation was for $423.3 million.

In fact, the graphics specialist has now delivered five consecutive quarters of triple-digit revenue increases from this business. Looking ahead, NVIDIA's supremacy in the GPU space -- where it commands over 72% of the market -- gives it a solid footing to tap the increasing demand for GPUs in data centers for complex data applications, such as computer-aided design (CAD) and high-performance computing.

Jon Peddie Research estimates that CAD in the cloud is yet to hit critical mass as just 9% of users have implemented cloud-based workflows. NVIDIA's GPUs are already powering CAD applications in the cloud, so an increase in adoption will lead to stronger demand.

Meanwhile, NVIDIA's GPUs are being used by big cloud service providers such as Amazon and Microsoft to train artificial intelligence (AI) systems and process complex workloads. Amazon, for instance, recently launched a new service powered by NVIDIA's Tesla M60 GPUs. The service allows users to select between one, two, or four GPUs depending on their requirement.

As it turns out, this new GPU-enabled framework carries twice the computational power of its predecessor, allowing Amazon users to execute virtual reality applications, video encoding, or 3D rendering and visualization. Looking ahead, NVIDIA's GPU applications in the cloud will continue growing as workloads will increase thanks to an increase in adoption of public cloud services.

Therefore, it won't be surprising if more cloud service providers turn to NVIDIA's hardware as the chip specialist claims to enhance server computing power by five times and concurrently reduce costs by 60%.

Automotive is just getting started

NVIDIA's automotive business is yet to gain critical mass, but it is gradually getting better as evidenced by a 19% year-over-year jump in revenue to $142 million. Though the revenue was lower than the Wall Street estimate of $146.2 million, investors shouldn't ignore that the chipmaker has made big moves in this space already by tying up with marquee automakers and component suppliers.

As it stands, NVIDIA's DRIVE PX artificial intelligence (AI) platform is already being used by 225 entities to develop self-driving cars. These partnerships will eventually bear fruit in the long run as more cars based on the DRIVE platform find their way into mainstream production. In fact, the likes of Toyota, Audi, and Volvo are already working with NVIDIA to bring the latter's technology into mainstream cars.

On the other hand, the commercial launch of the Tesla Model 3 could provide another boost to NVIDIA as its second-generation autopilot program is powered by the DRIVE PX platform. Tesla recently started deliveries of its entry-level electric car, boosting the car's daily net orders to 1,800 units.

CEO Elon Musk believes that Model 3 demand could potentially hit 700,000 cars a year, which seems achievable given the rate at which orders are flowing in. Not surprisingly, Tesla is now working to boost the production capacity of the Model 3 to 10,000 units a week by next year, which will eventually push up NVIDIA's sales as well.

NVIDIA investors need to focus on the long-term opportunity instead of being critical about the short-term performance. The company has already proven that its data center and automotive businesses are gaining traction, and they won't be running out of steam anytime soon.