Last week, Ubiquiti Networks (NYSE:UI) -- manufacturer of wireless data communication and wireless broadband products for the enterprise market -- announced a new product called FrontRow. FrontRow is a wearable camera built into a flattish pendant that hangs around the user's neck. Using FrontRow gives the user the ability stream video and take continuous photos while retaining the ability to experience an event, without having to hold a camera or cellphone. The two-sided pendant also comes with a customized operating system that can integrate with other applications. Here are the product details: 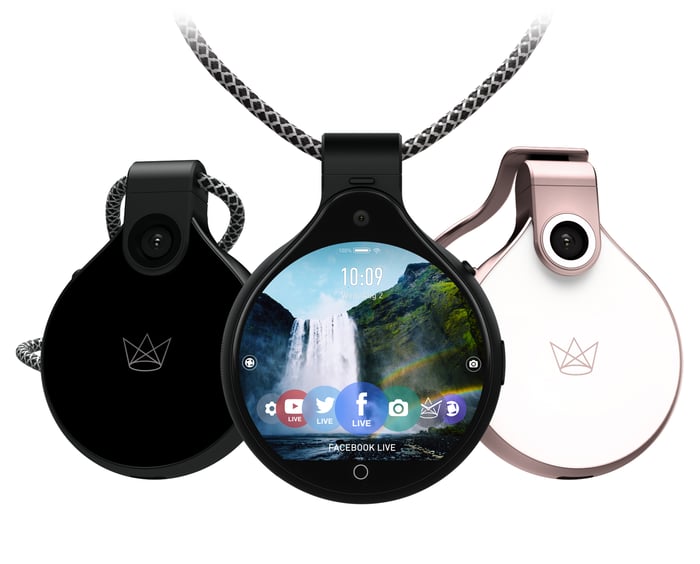 The product marks an entirely new area for Ubiquiti in the consumer wearable space. Ubiquiti is primarily known for its service provider and enterprise WiFi products, although the company did start a consumer division just last summer called Ubiquiti Labs. Still, the initial product from that division was Amplifi, a consumer router that essentially provided the same function -- WiFi connectivity -- as the company's enterprise products. The new venture into the consumer wearable market -- a market that has, in general, not been kind to investors -- is a bold but daunting new undertaking.

Some may see this as a foolish venture for Ubiquiti, outside the company's core competency, and in an unattractive industry. According to the company, the product was the idea of CEO Robert Pera, which came about when he was sitting court-side at a Memphis Grizzlies game (the team he owns). That may seem to some like a distracting vanity project. Others may wonder why the company would be investing in new markets if the growth trajectory in its core markets were as good as management claims.

Moreover, the "life-logging camera" is not new. It has been tried by numerous start-ups and hardware giants alike. According to reports, these predecessors haven't gained much traction. However, FrontRow does seem to have a cool design and better features, but will this difference lead to wider adoption?

On the other hand, continuous experimentation is a core competency of Ubiquiti. Due to its lean business model, the company can afford to take lots of "bets" without investing much, at least in dollar terms. Therefore, it could be argued that FrontRow is a "heads I win, tails I don't lose much" scenario. After all, until 2011, the company did not even have an enterprise division. Now that division is almost half a billion dollars per year in sales, recently surpassing its legacy service provider segment.

Moreover,  FrontRow does seem to be a better product than predecessors. The livestreaming to Facebook, Twitter, and Youtube and the 2-inch screen on a customized OS are true differentiators.

If the product does gain traction, it could be impactful. At first glance, it seems possible FrontRow could take some market share from GoPro (NASDAQ:GPRO). In any case, if FrontRow manages to sell one-tenth the units that GoPro does (GoPro made $1.3 billion in the past twelve months), FrontRow could add about $100 million in annual sales, which would increase Ubiquiti's revenue by roughly 12%. That's significant.

As those who have read my previous articles can attest, I am a fan of Ubiquiti. To me, the FrontRow product is a welcome experiment and should give investors optimism that more new products are coming down the pike. I wouldn't stake my investment in Ubiquiti on the success of this product or even the consumer division, but FrontRow is a welcome addition.