Conor McGregor is one of the most visible figures in professional fighting and has an estimated net worth of roughly $100 million. The 28-year-old Irish-born fighter rose to prominence in the Ultimate Fighting Championship (UFC) and quickly developed a reputation for his devastating striking skills, as well as his quick wit and penchant for self-promotion.

The athlete, who sometimes goes by the nickname "The Notorious," has since parlayed his mixed-martial arts success into a boxing career that will kickoff with an exhibition match against one of the sport's all-time greats, Floyd Mayweather. The fight with Mayweather is set to be the single biggest contributor to Conor McGregor's net worth, and is expected to be one of the highest-grossing events in boxing history. 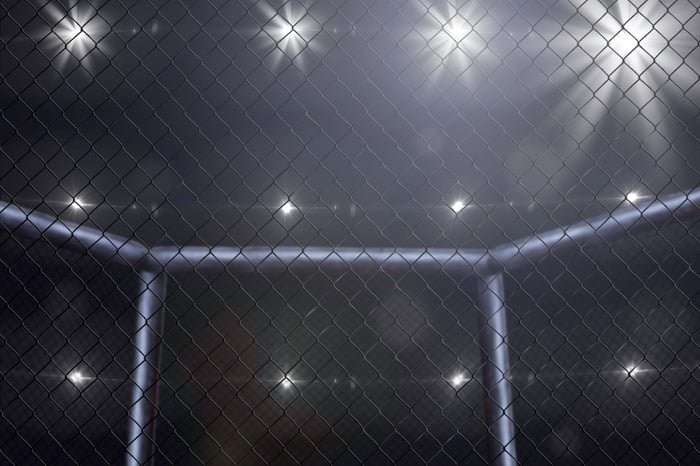 How did Conor McGregor build his net worth?

McGregor's journey on the road to professional fighting stardom began at age 12 when he enlisted in a boxing class in his hometown Crumlin, Dublin. He continued to train in a variety of martial arts disciplines and had his first amateur fight in 2007 at the age of 18. By 2008, he was fighting professionally.

McGregor fought six fights before his 2010 signing and debut with Cage Warriors, one of Europe's biggest mixed martial arts (MMA) promotions. He would go on to hold both the featherweight and lightweight championship belts in the Cage Warriors league, but the time with the European fighting promotion was likely not a big contributor to Conor McGregor's current net worth, as his final fight before moving to the UFC was estimated to have earned him a payout in the low four figures.

Conor's considerable success in Cage Warriors did, however, lay the groundwork for the next step in his career, as his fighting skills and rising popularity caught the attention of UFC president Dana White. McGregor signed with the UFC in 2013 and made $16,000 in base pay and win bonuses for his debut fight in the promotion -- as well as an additional $60,000 for receiving the "Knockout of the Night" award. His UFC pay grew quickly from there.

In 2015, McGregor commanded $500,000 for his fight against Jose Aldo at UFC 194, as well as a $40,000 bonus for wearing Adidas apparel to the ring, a $50,000 bonus for winning a performance-based award, and a cut of the pay-per-view (PPV) revenue for the night. His following three fights saw him earn a base pay of $1 million, $3 million, and $3.5 million, respectively. Looking at just base pay and performance bonuses, Conor has earned roughly $9.3 million from UFC fights -- a figure that doesn't include earnings derived from PPV sales.

Exact breakdowns of McGregor's fight contracts are not available -- however, his bonus payments for subscription sales have been sizable. Forbes estimated that he earned roughly $18 million from June 2015 to June 2016, and $27 million from two UFC fights in 2016 when his cuts from pay-per-view sales were factored in. McGregor is currently the highest-paid fighter in the UFC, but even his sizable earnings in mixed martial arts will pale in comparison to the payday tied to his boxing match with Floyd Mayweather.

The fight will be carried as a pay-per-view event through CBS's (NYSE: CBS) Showtime network and could wind up as the highest-grossing PPV program in history. The Notorious' payout for the fight with Mayweather has not been officially revealed, but analysts have estimated that he could net roughly $100 million for the event -- by far his biggest purse to date.

In 2015, Conor signed an endorsement deal with Reebok that paid him to wear the company's apparel in UFC events. The deal netted the fighter roughly $190,000 across five fights. However, he let the deal lapse in the lead up to his showdown with Floyd Mayweather in order to potentially take advantage of more lucrative opportunities.

In another 2015 deal, the brawler joined the AB-InBev team to promote Bud Light, and rather than let the partnership expire, he resigned with the beer company in 2017. McGregor has also signed endorsement deals with Monster Beverage to promote its energy drinks, nutrition and supplements company BSN, and Apple's Beats by Dre brand.

Adding up Conor McGregor's MMA fight money, estimated earnings from promotional deals, and his huge boxing windfall, while also accounting for taxes and expenses, it's reasonable to expect that his net worth is in the $100-million range.

What's next for Conor McGregor's net worth?

In addition to landing him a huge payday, McGregor's fight with Floyd Mayweather will likely open up a range of opportunities that give the athlete new chances to increase his net worth. Regardless of the outcome of the fight, Conor's transition to professional boxing has dramatically raised his public profile, and will likely allow the Irish athlete to command much larger endorsement deals going forward. McGregor has made clear that he plans to return to the UFC to defend his title as champion of the lightweight division, and will likely command record pay for any future UFC fights.

There have also been rumblings that McGregor could face Mayweather in a rematch, either in boxing, or in mixed martial arts, a potential event that would be sure to generate another huge windfall for the Irish fighter. While McGregor has stated his preference for mixed martial arts competitions, he will have plenty of incentive to return to the boxing ring, as it currently offers much bigger payouts than the UFC.

As for how McGregor will manage his money going forward, the fighter has said that he is studying up on investing, and that he plans to bring the same discipline to financial planning that has helped shape his incredible fighting career.

What Is Conor McGregor's Net Worth? @themotleyfool #stocks Next Article
Current