Banks have a tendency to cut their dividends when times get tough. But even if the economy were to turn down, there's little reason to think that Bank of America (NYSE:BAC) would find it necessary to do so.

The reason is that its dividend payout ratio is very modest. Over the past 12 months, Bank of America has paid out only 18% of its earnings to shareholders, leaving it a wide margin of safety even if its net income were to take a hit.

You can get a sense for the size of this margin by comparing Bank of America's payout ratio to its competitors, the three other megatrillion banks: JPMorgan Chase (NYSE:JPM), Wells Fargo (NYSE:WFC), and Citigroup (NYSE:C).

Wells Fargo paid out the largest share of its net income to shareholders over the past year, at 41%. It's followed by JPMorgan Chase at 33%, and Citigroup at 19%.

The reason Bank of America and Citigroup distribute so much less than their peers isn't because they want to. It's rather because they haven't gotten the green light from regulators over the past eight years to boost their quarterly payouts as frequently.

Under the Dodd-Frank Act of 2010, banks with more than $50 billion in assets on their balance sheet much seek permission to raise their dividends. This happens as a part of the annual stress tests -- or, more formally, the Comprehensive Capital Analysis and Review. Bank of America's request to boost its dividend this year was approved by the Federal Reserve, but it was only the third time that the Charlotte, North Carolina-based bank has proceeded to do so since Dodd-Frank came into effect. And the same has been true in the case of Citigroup.

By contrast, both Wells Fargo and JPMorgan Chase have consistently been granted the authority to raise their dividends each year, which is exactly what they've done. 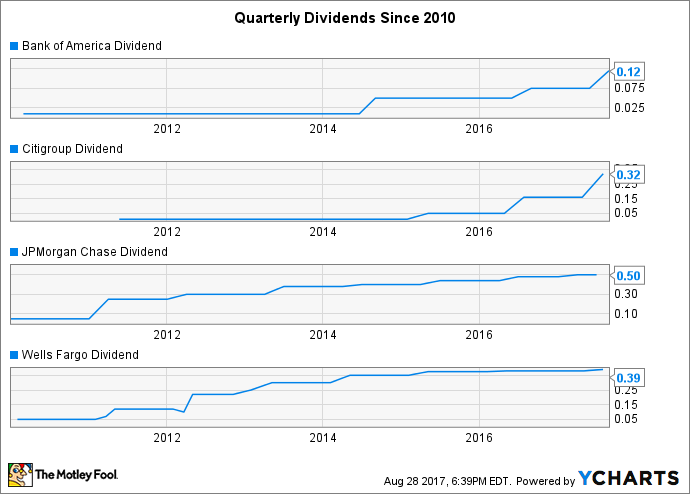 That's good news for Wells Fargo and JPMorgan Chase's shareholders, given that they've benefited from these banks' growing payouts. At the same time, however, it means that their dividends have less upside than Bank of America's and Citigroup's, both of which still have a lot of ground to make up from the perspectives of their payout ratios.

Furthermore, as I noted, the fact that Bank of America's payout ratio is so low, also means that shareholders in the bank have little to no reason to be worried that it will cut its dividends anytime soon. At least for the foreseeable future, there's only one direction the bank's payouts are likely to head, and that's up.