Brian Withers
(TMFBwithbike)
Author Bio
Brian Withers has been a Fool since 2004 and loves to invest in companies that are disrupting the status quo. His best investment was to get his kids into Foolish stocks at the young ages of 5 & 7. Prior to starting his contract writer role with The Fool, he spent 30 years between IBM, Dell, and Allergan helping make their operations run better. When he's not writing, you can find Brian riding his bike around the Research Triangle Area in North Carolina. Feel free to reach Brian via email: bwithbike@gmail.com.
This article represents the opinion of the writer, who may disagree with the “official” recommendation position of a Motley Fool premium advisory service. We’re motley! Questioning an investing thesis -- even one of our own -- helps us all think critically about investing and make decisions that help us become smarter, happier, and richer.
Follow @bwithbike

The e-commerce platform company for entrepreneurs, Shopify (NYSE:SHOP), is turning out earnings reports that are beginning to sound the same: record number of merchants on the platform, solid growth in the top and bottom lines, and continued investments to make the platform more valuable. For investors, this doesn't get old. Read on for what management had to say as the company put another great quarter in the books.

Q2 was another strong quarter with an increasing number of entrepreneurs, SMBs and larger brands, both starting and growing their businesses on the Shopify platform.

Shopify added a record number of merchants to its platform last quarter, driving another fantastic quarter of 75% year-over-year revenue growth. The revenue growth is split between subscriptions solutions and merchant solutions. Subscription solutions revenue, the sum of all the monthly subscription fees that merchants pay to use the Shopify platform, increased 64%. Merchant solutions, which is a combination of a small percentage of the gross merchandise volume sold on the platform and any additional merchant services, grew 86%.

Shopify Plus, the highest level of subscription service, grew to 18% of the total monthly recurring revenue or $4.3 million, which is up from 13% a year ago. Shopify Plus is a sliding scale cost to merchants depending on sales volumes. The minimum cost is $2,000 per month and goes up to a maximum of $40,000. Monthly subscription revenue from Shopify Plus is also up sequentially from $3.5 million last quarter.

Lastly, gross merchandise volume, the total of all merchandise sold through the platform hit another record of $5.8 billion for the quarter which helps drive merchant solutions revenue. I've said that merchant solutions is the one number for investors to watch, as it shows that Shopify's customers are successful in driving sales. All of this growth on the top line is helping the company improve its cost position.

Gross profit dollars, once again, grew faster than revenue in the quarter. Margin improvements in both Subscription Solutions and Merchant Solutions more than offset the higher mix of Merchant Solutions in our overall revenue mix...both continue to benefit from scale...

Let's break down the details the the tremendous results that Jones described. First, gross profit -- the profits that are left after the cost of sales is subtracted from revenue -- grew 83%, faster than the overall revenue growth of 75%. In the chart below, you can see the trend of gross margins by business segment. While the merchant solutions' gross margin is considerably lower, that part of the business is growing faster, but the margin improvements in both segments made up for the "mix effect." 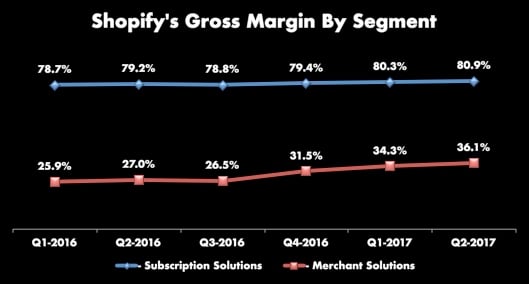 When Jones refers to the benefits of scale, he means that Shopify can support more merchants with less incremental costs, which will mean that Shopify should continue to improve margins and profits as the company grows.

Lastly, Shopify reconfirmed its target to "achieve operating profitability on adjusted basis in the fourth quarter of this year."

While Shopify continues to attract more merchants, which helps it scale its business, the company has not stopped improving its platform.

Growing the value of the ecosystem

And while it is very important to us to foster entrepreneurship by removing barriers to commerce, it is even more important to us to ensure our merchants have every possible means to succeed. We made a lot of progress toward the second goal as well in Q2. We added more sales channels. We rolled out new features, and we continued to grow the value of our ecosystem.

Shopify has kept the entrepreneur and small business owner at the center of all it does and is constantly improving the platform. This quarter is no exception.

Shopify announced Shopify Pay and its EMV (Europay, MasterCard, and Visa) chip and swipe card reader at its Unite conference in April. Shopify pay allows customers to save address and payment information on one merchant's e-commerce store and the customer is able to use the saved information when visiting a different merchant's store. With over 500,000 merchants on the platform, this is a tremendous benefit to Shopify merchant's customers. Shopify EMV chip and swipe card reader allows merchants to collect payments from customers in-person with a credit card. While the company has been solely a software company, this foray into hardware is in line with Shopify's feature prioritization mantra of most merchants, most of the time.

Lastly, Shopify talked about its recent announcement of a partnership with eBay. Finkelstein explained that once up and running the partnership will expose "167 million shoppers to our merchants' products and expands the product options for eBay's users." That's pretty awesome.

Shopify continues to execute its business plan: attract merchants to drives more product sales. This attracts more more channels, partners, and capabilities, which, in turn, attracts more merchants. This plan has worked well so far for Shopify, its customers, its partners, and its investors, I don't see that changing anytime soon.