The major benchmarks posted gains on Wednesday, as geopolitical fears and hurricane concerns gave way to positive economic news. A report released by the U.S. Department of Commerce showed that GDP rose at a rate of 3% in the second quarter, higher than previously estimated. The tech-heavy Nasdaq Composite saw the best performance, climbing 1.1%. Good news from a few select companies produced solid gains, and Analog Devices, Inc. (NASDAQ:ADI), Gilead Sciences, Inc. (NASDAQ:GILD), and Universal Display Corporation (NASDAQ:OLED) were among the best performers on the day. Below, we'll look more closely at these stocks to tell you why they did so well.

Shares of Analog Devices moved 5.2% higher after the company reported third-quarter financial results that beat analysts' expectations. The semiconductor specialist produced revenue that grew to $1.43 billion, up 65% year over year as the result of a recent acquisition, beating analysts' expectations of $1.4 billion. The company had income of $68.9 million, resulting in adjusted earnings of $1.26 per share, which was higher than the $1.15 expected by investors. Analog Devices revealed that its strong performance exceeded the high end of its own expectations and was broad-based, led by a "highly diverse and profitable industrial market."

President and CEO Vincent Roche stated, "The third quarter also represented our first full quarter with contributions from Linear Technology, and we are pleased with the early returns. Customers are engaged and excited by the value creation possibilities enabled by the combination, and we are making excellent progress on realizing our cost synergy targets." 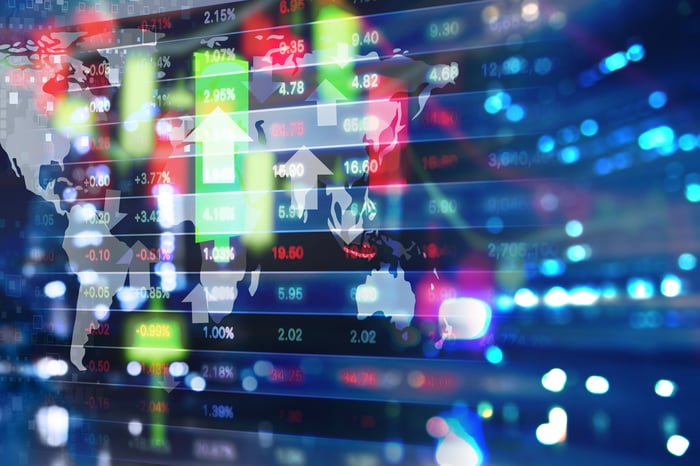 Gilead Sciences stock gained 7.3% after Swiss drugmaker Novartis (NYSE:NVS) was awarded the first approval by the U.S. Food and Drug Administration (FDA) for a certain type of promising new cancer treatment. While this does not benefit Gilead directly, it does bolster investors' confidence that the company made the right decision when it acquired Kite Pharma, Inc. (NASDAQ: KITE) on Monday, in a deal valued at $11.9 billion. The new approach, CAR-T cell therapy, is a targeted immunotherapy treatment that recruits the body's own immune system in the fight against cancer cells. Kite is working on CAR-T therapies similar to the one approved by the FDA.

Some investors had questioned whether Gilead had overpaid, shelling out a nearly 30% premium for the smaller biotech company. Kite is a leader in the cell therapy, and is awaiting regulatory approval for axicabtagene ciloleucel, which would be the first approved treatment for refractory aggressive non-Hodgkin lymphoma (NHL). The win for Novartis goes a long way toward validating that Gilead's move was the right one.

Universal Display gets an analyst nod

Finally, shares of Universal Display rose 12% in response to a positive analyst report for the pioneer in organic light-emitting diodes (OLED). Deutsche Bank analysts Sidney Ho and Ross Seymore initiated coverage on the stock at buy with a $135 price target. They believe that the adoption of OLED technology in smartphones is at an inflection point, following reports that it will be used in the soon-to-be-revealed premium version of the iPhone, and that OLED technology will become standard for smartphones. As manufacturing costs come down, OLED TVs may present additional growth opportunities. Universal Display will benefit from its strong portfolio of intellectual property and represents the only "pure play" in the fast-growing OLED segment.