There's no question they're bad for your health. But given their addictive nature, both beer and cigarettes have proven to be investments with enviable returns. That's why so many investors flock to Philip Morris (NYSE:PM) and Anheuser-Busch InBev (NYSE:BUD).

But which of these dividend-paying stalwarts is a better bet for your portfolio today? While that's not a question that can be answered with 100% certainty, there are ways to getting some more clarity on the decision. If we break it down to three simple categories, the picture gets clearer. 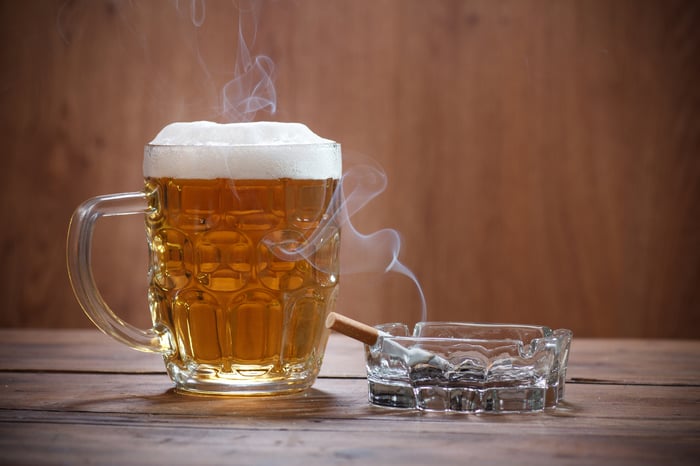 This is by far the most important thing to keep an eye on for long-term investors. A sustainable competitive advantage -- otherwise referred to as a "moat" -- is what differentiates one company from the next. Because there's nothing prohibiting start-ups from making their own beer or cigarettes, the key moat for both of these companies is the strength of their brands.

Philip Morris operates outside of the United States, and is parent company to Marlboro, L&M, and many other brands. Marlboro alone is ranked as the 25th most valuable brand in the world by Forbes, valued at over $24 billion. While this includes the brand strength in America -- which falls under the purview of Altria -- it speaks to the brand's ubiquity. Indeed, if we remove China from the equation (it has a state-run cigarette company), Marlboro and L&M are respectively the most and third-most popular brands globally.

Anheuser, on the other hand, recently bought SAB Miller. As a result, it is the world's largest beer maker. The company is parent to Budweiser, Corona, Stella, and a host of other smaller global brands. Forbes ranks Budweiser as the 22nd most valuable brand globally, valued at $24.6 billion.

Given both companies' ubiquity globally, and the apparent pricing power that comes with those brands, I'm calling this one a tie.

The main draw for investors in these companies is the dividend that they pay out. With recognizable brands and comparatively low input costs, they both spit out lots of cash.

But while we'll get to those payments in a minute, it's worth considering how much cash the company keeps on hand for a rainy day as well. While such an allocation might be boring, it is also crucial. That's because every company, at one point or another, is bound to experience difficult economic times. Those that have cash on hand have options: buy back shares on the cheap, acquire weaker rivals at a discount, or outspend the competition into bankruptcy.

Debt-heavy companies are in the opposite boat, forced to narrow their focus just to make ends meet.

Here's how these two stack up, keeping in mind that Anheuser is valued at a 25% premium -- via market capitalization -- to Philip Morris.

To be honest, I'm not terribly impressed with either company's balance sheet. While reliable free cash flow means that neither has much to worry about when it comes to meeting their debt obligations, both companies have a fair amount of leverage.

Both companies have identical cash-to-debt ratios, but the differentiator is Philip Morris' free cash flow, which is far superior to Anheuser-Busch, even though the latter is a bigger company.

And then we have valuation. There's no one metric that can tell you just how expensive a stock is. Instead, I like to use a number of data points to get a more holistic picture.

On the surface it might seem that Philip Morris is cheaper than Anheuser -- on both an earnings and free cash flow basis. But it's important to remember that the latter's numbers are slightly skewed given the acquisition of SAB Miller.

That's where the PEG ratio -- which factors normalized growth into the equation -- comes in. On that metric, Anheuser appears to be trading at a 40% discount to Philip Morris. With both companies having relatively similar and strong yields, the scale tips ever-so-slightly in favor of Anheuser-Busch.

So there you have it: We have a draw. Both companies have strong moats provided by their ubiquitous brands. Philip Morris has the stronger cash flows for now, while investors appear to be getting a better bargain on Anheuser-Busch InBev at current price levels.