As I wrote in the previous installment in this dividend stock series, we're in a sleepy time for dividend raises. Many companies are holding off on declaring higher payouts until the next "earnings season," which won't get going until October.

In the meantime, there is the occasional scrap for income investors to feed on. Last week, a handful of companies threw out some morsels. Here are a few words about three of these issuers. 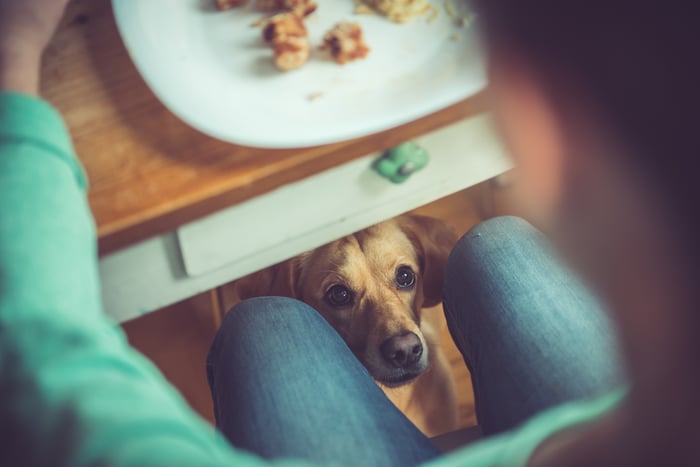 One of the biggest players in big tobacco, Altria Group (NYSE:MO), is lifting its quarterly payout by 8% to $0.66 per share.

The industry is headed into a cloudy future, however. The Food and Drug Administration has proposed deep cuts in acceptable nicotine levels in cigarettes. This would reduce the addictive qualities that keep smokers puffing away and affect the business of Altria and its peers.

Yet the industry is gearing up for a healthier market. Altria is set to become the exclusive U.S. distributor of IQOS, the e-cigarette product developed by former corporate sibling Philip Morris International. This won't be Altria's first turn at the e-cigarette rodeo. It's been selling its own brand, MarkTen, for several years.

Perhaps Altria won't be quite as spectacularly profitable in the future as it was in the past. But it'll be in a comfortable position with a compelling product that has a very promising future. As such, we can expect operating and cash flow to remain relatively high. The company should be able to at least maintain this new dividend. 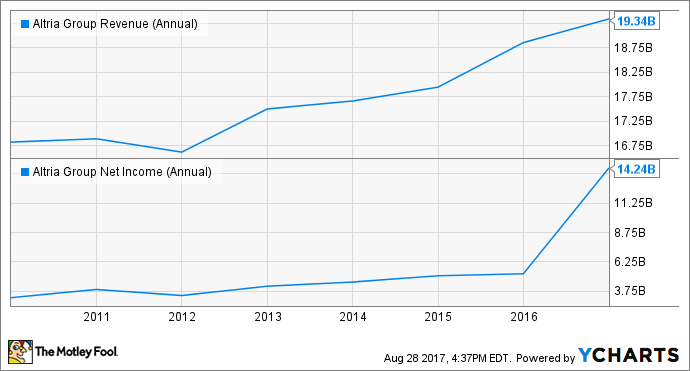 Altria's upcoming distribution is to be paid on Oct. 10 to shareholders of record as of Sept. 15. The payout ratio is 64% on the most recently reported quarterly net profit. The new dividend would yield 4.1% on the company's current stock price. That's more than double the present 1.9% average yield of dividend-paying stocks on the S&P 500.

Martin Marietta Materials (NYSE:MLM) has elected to boost its quarterly dividend by 5%. The building materials specialist's new distribution will be $0.44 per share.

The company is riding the recent wave of demand for the goods it produces, thanks in no small part to a strong housing market. In Q2, it booked a nearly 9% year-over-year increase in net sales, while net profit rose almost 17% to land at slightly over $142 million. The latter shook out to diluted earnings per share of $2.25, a new company record for the quarter.

The good times are anticipated to continue. Martin Marietta cited the federal government's FAST Act, and continued growth in both residential and non-residential construction, as business drivers going forward.

That Q2 EPS figure makes the payout ratio on the upcoming dividend just under 20%, which leaves a lot of room for the share buybacks the company is so fond of. In its most recently completed fiscal year, it spent almost $238 million on stock repurchases, which was more than double the $105 million it shelled out in dividends. So I'd say the new payout is quite secure, at least into the foreseeable future. 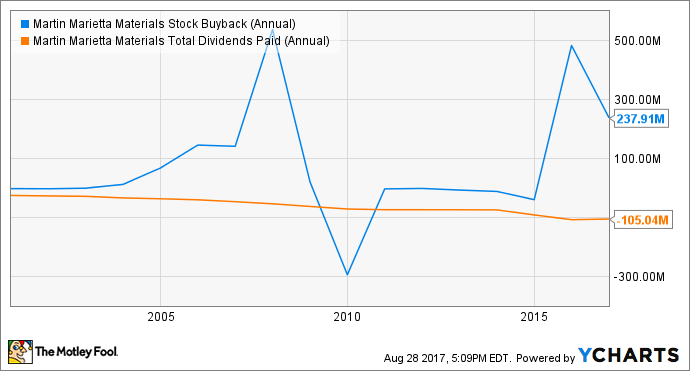 Martin Marietta's next dividend will be dispensed on Sept. 29 to investors of record as of Sept. 5. It would yield 0.9% on the company's recent closing share price.

The only double-digit raiser of our trio today is chemicals and plastics manufacturer Westlake Chemical (NYSE:WLK). It's giving its quarterly dividend a 10% injection, growing it to $0.21 per share.

Last year, Westlake bulked up significantly when it bought chlorovinyl-goods producer Axiall in an all-cash deal with an enterprise value of around $3.8 billion. 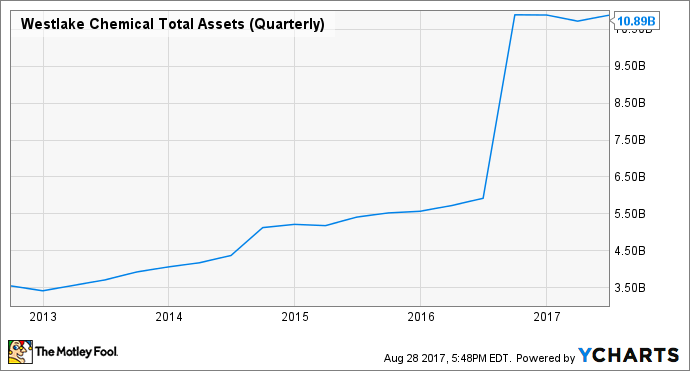 Now that Axiall is incorporated in its results, Westlake's top line has expanded greatly. Net sales in the company's second quarter nearly doubled on a year-over-year basis, to just under $2 billion. The profitable Axiall also helped its new parent grow net income by 38%, although the resulting $153 million didn't quite meet analyst expectations.

Westlake is relying on its new(ish) asset to keep contributing to growth. CEO Albert Chao was quoted in a company press release as saying that "the acquisition and continued investment will position us to fully leverage the improving Vinyls environment," referring to a crucial product category for the company.

Over the past year, the company's free cash flow figure has taken a hit because of the acquisition. It's still sufficient to cover both the dividend distribution and share buybacks, though. Meanwhile, at a skinny 18% of second-quarter EPS, the company's payout ratio is nothing to be worried about.

Westlake Chemical's next dividend will be handed out on Sept. 18 to shareholders of record as of Sept. 1. At the current stock price it would yield 1.1%.