The stock market's week got off to a tough start on Tuesday, coming out of the Labor Day holiday with substantial declines due to concerns about the geopolitical situation between the U.S. and North Korea. Major market benchmarks were down about 1% on the day, with the Dow Jones Industrials falling more than 230 points. Financial stocks, especially those in the insurance industry, took a hit on concerns about the likelihood that Hurricane Irma may hit the U.S. toward the end of the week -- which would be the second major hurricane to make landfall here in a month. Yet some segments of the market still remained strong, and a few companies reported good news that helped their stocks post large gains. Insmed (NASDAQ:INSM), Himax Technologies (NASDAQ:HIMX), and Yamana Gold (NYSE:AUY) were among the best performers on the day. Below, we'll look more closely at these stocks to tell you why they did so well.

Insmed shares more than doubled -- rising 120% to $26.99 -- after the biotechnology company reported favorable results from a late-stage clinical trial of a treatment for a form of lung disease. Insmed said that its phase 3 Convert study of its amikacin liposome inhalation suspension met its primary endpoint, with more than three times as many patients with nontuberculous mycobacterial lung disease seeing favorable outcomes from the treatment compared to simply getting traditional guideline-based therapy options. As CEO Will Lewis explained, "Treatment of this serious and potentially debilitating disease is an unmet medical need, and we expect these important data will enable us to submit for accelerated approval." Investors have high hopes for the drug, and even though nontuberculous mycobacterial lung disease caused by mycobacterium avium complex is rare, the positive results bode well for the possibility that the treatment will be effective against related diseases as well. 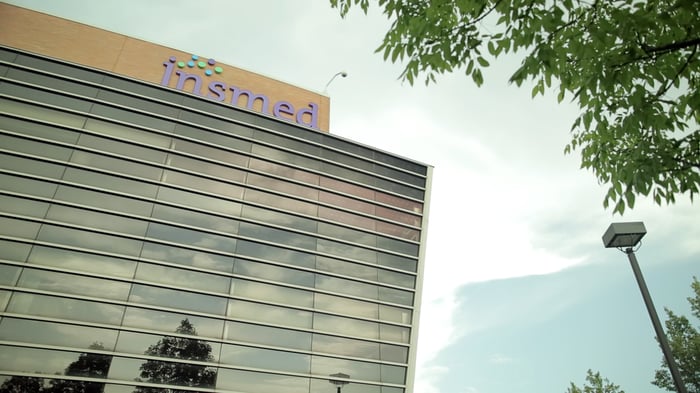 Himax Technologies gained 9% to $11.40 Tuesday, adding to its solid results from August. Investors remain optimistic that the company's 3-D depth-sensing technology will get integrated into popular electronic devices, including the new iPhone model. Tuesday's move likely stemmed from investors positioning themselves for an anticipated release of the next iPhone within the next week. The fact that the stock is close to doubling so far in 2017 shows just how much confidence investors have that Himax will be getting a huge boost to its business from placement in these new devices. That leaves the stock vulnerable to a correspondingly huge pullback if that doesn't happen, but for now, Himax is riding an  wave of optimism higher.

Finally, Yamana Gold gained almost 7% to $3.16. The gold miner benefited from favorable moves in the commodity markets, where gold climbed about $8 per ounce to finish the day above $1,340, its highest level in almost a year. For Yamana in particular, higher gold prices could have an outsized benefit, because the miner's small size makes it more leveraged to favorable movements in precious metals. That's the primary reason behind expectations for earnings to quadruple at Yamana by 2020, and if gold prices continue their upward climb, then those strong results could come sooner rather than later.