GoPro Inc (NASDAQ:GPRO) is attempting to pull off a difficult balance: it needs to make just little enough inventory to make sure there's not an excess of product in the market this holiday season without losing sales by being back-ordered. In short, the company is trying to create a product shortage this holiday season.

Inventory is the #1 challenge for GoPro, and it has to get its inventory strategy right or risk continued losses. In 2015 GoPro was awash with inventory, and in 2016 it didn't make enough to meet demand. Not surprisingly, it lost money both years. As we approach the 2017 holiday season and the release of the Hero 6 camera, investors should be watching inventory levels closely. Here's what to watch for.

Sales, inventory, and the balancing act

You can see that in early 2015, GoPro's inventory turnover rose to over 12 times per year. But as the year wore on GoPro's inventory rose while its turnover fell. And this doesn't include overbuilt channel inventory at retailers as well. This is what led to massive writedowns after the holiday season and financial losses to end the year. Operating conditions improved in 2016 because management constrained inventory, but turnover was still down significantly from 2014. 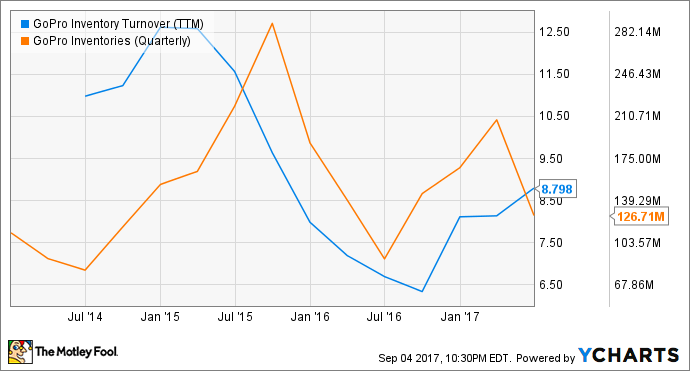 GoPro's plan is to keep inventory relatively low and keep turnover high. This reduces the risk of writedowns in the future.

The downside of the strategy is that sales channels may not be full enough to fulfill sales when customers are ready to buy. This is a particularly challenging risk when the holiday season can account for nearly half of the company's sales.

GoPro could accomplish both the goal of reducing overall channel inventory and increasing turnover by selling more product directly to customers. GoPro.com accounts for less than 10% of sales, something the company should change in the future. E-commerce requires the lowest channel inventory and likely has significantly higher margins than selling through distributors and/or retailers.

As new products like Karma and Fusion are rolled out, watch to see if e-commerce sales directly to customers account for a larger percentage of sales. If they do, GoPro can more easily execute a strategy of keeping inventories tight without losing too many sales. The shorter the path to the customer the better.

The final five months of 2017 are key to GoPro's future. If the company's new products like Hero 6 and Fusion are in high demand and management can hit revenue targets the company could return to profitability. But failing to execute will force management to cut operating costs, meaning R&D and sales expenses will be cut. And that's a recipe for disaster -- a disaster investors hope GoPro can avoid.