Hewlett-Packard Enterprise (NYSE:HPE) had a surprisingly good 2017 third quarter for a tech company that has been weighed down in recent quarters by its plan to slim down its operations.

The company reported earnings of $0.30 per share, topping estimates for $0.26 per share. Revenue also exceeded expectations at $8.21 billion versus consensus estimates for $7.49 billion. Shares of HPE closed down 1.96% to $13.77 on Wednesday.

Investors could be focusing on HPE's tepid earnings forecast of $0.26 to $0.30 per share for the current quarter when previous estimates had pegged earnings at $0.40 per share. Also worrying is a Wall Street Journal report that claims people close to HPE CEO Meg Whitman said she could leave as soon as this fall.

To get caught up on the company's transition plans, here are the four things you need to know from HPE's Tuesday afternoon earnings call. 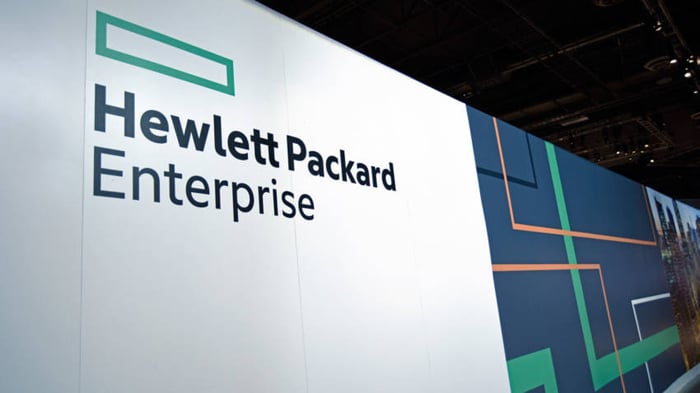 Hewlett-Packard Enterprise is still slimming down but managed to post a solid quarter.

1. Meg Whitman will NOT be the CEO of Uber.

Before Expedia's Dara Khosrowshahi became CEO of Uber, HPE CEO Meg Whitman's name was being thrown around in the media as a possible replacement for former Uber CEO Travis Kalanick, who resigned in June after the company's scandalous start to 2017.

On July 27, Uber investor Whitman denied the rumors in a tweet that read: "We have a lot of work still to do at HPE and I am not going anywhere. Uber's CEO will not be Meg Whitman."

Whitman once again voiced her commitment to HPE during the company's earnings call. She admitted that she was called into the Uber CEO search pool "very late" but thought it was "a very interesting business model" and a "disruptive" company. In the end, Whitman said it wasn't the right position for her.

However, Whitman did not specify how long she planned to stay at HPE. As mentioned previously, sources told the Wall Street Journal that Whitman has already started to plan for her exit, which could happen as soon as this fall. This is notable as Whitman has been leading HPE's turnaround efforts for the past six years.

2. Hurricane Harvey could have an impact on HPE's financials.

Hurricane Harvey, which ripped through Texas and Louisiana last week, has had a "substantial impact" on HPE's Houston operations, HPE CFO Timothy Stonesifer said on the call.

While he said the safety of its employees is the company's top priority, it is still assessing the impact on its business. The company has limited production in the city and was able to ship products for customers to other locations so that orders could be fulfilled, he noted.

"Of course, we will bear uninsured costs associated with lost inventory or repairs to our campus but have not incorporated anything into our outlook at this time," Stonesifer concluded.

3. The company is still slimming down.

On Friday, the Palo Alto-based business took a major step forward in its slim-down plan by officially closing the spin-off and merger of its software business with British software company Micro Focus in an $8.8 billion deal.

Now that the company is smaller, it can focus on creating a "simpler, nimbler and faster" operating model, Whitman claimed. The first step in this direction is its HPE Next program, which was announced in June and aims to simplify its entire operations.

Whitman explained the purpose of HPE Next on the earnings call:

We aim to go into FY '18 with a clean sheet operating model, in a way that I hope customers will see a difference right away. . . If you think about what was required to hold this company together when it was a very large multi-business company, some of those ways of doing business we need to let go of.

4. HPE will continue to invest in these three areas.

HPE may be slimming down, but it's also making wiser investments that are in-line with its simpler business model because "innovation is our lifeblood," Whitman said on the call.

HPE isn't wasting any time on investing in these areas. On Tuesday, the company announced that it bought Boston-based Cloud Technology Partners (CTP), which has worked with Amazon Web Services (AWS), Microsoft Azure and the cloud platform for Google, owned by Alphabet. CTP helps clients move the appropriate applications to public and private clouds and it helps them develop new tools for the cloud by using big data and IoT.

Amazon Web Services is still the leader in the public cloud space. For the past quarter, AWS generated $916 million in operating income on $4.1 billion in revenue. That represents a 42% year-over-year increase in revenue.

On the earnings call, Whitman said that CTP will help boost the company's consulting capabilities.