Uber's new chief will have to heal a divided company, move past a massive scandal, and make peace with a Silicon Valley heavyweight. And that's just for starters.

Ride-hailing giant Uber Technologies has a new CEO. After an extensive search that included several famous names, the company's board has reportedly chosen Dara Khosrowshahi to take its top job.

It's a plum job, but also a daunting one. Khosrowshahi will take the helm of a high-flying, high-profile company that has been dealing with several crises simultaneously for months now.

An Uber self-driving test vehicle in San Francisco. The rush to develop its own self-driving technology is just one of several challenges facing Uber now. Image source: Uber Technologies.

Who is Dara Khosrowshahi?

He's the CEO of Expedia (EXPE -1.43%). Khosrowshahi has led Expedia for the last 12 years, a period of substantial growth for the travel-services company. Expedia's revenue more than quadrupled under Khosrowshahi's leadership, from $2.1 billion in 2005 to $8.7 billion last year.

Perhaps more to the point for Uber's investors, Expedia's stock price has also done very well over the course of Khosrowshahi's tenure. 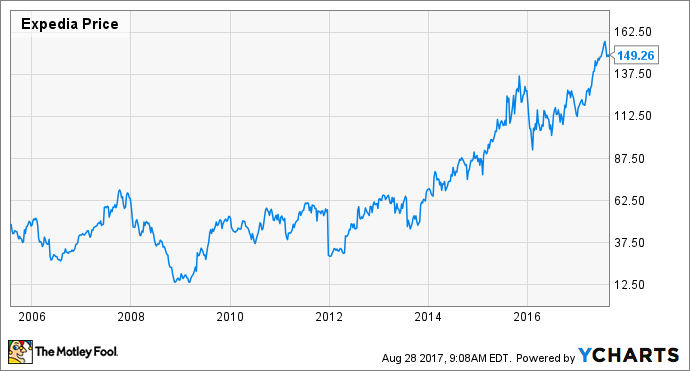 He's no stranger to competitive pressures: Expedia has battled with travel archrival Priceline Group for years, and Khosrowshahi has been able to keep Expedia a step ahead. Among other key events, he led Expedia through a merger with rival travel platform Orbitz, and subsequently drove Expedia's $3.9 billion acquisition of HomeAway, both in 2015.

Khosrowshahi is said to be an intense but accessible leader, well-regarded by his team and by rank-and-file Expedia employees. 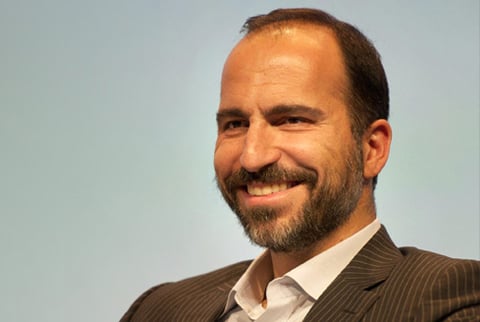 He's also at least somewhat acquainted with transportation-technology businesses. Khosrowshahi has personally invested in Convoy, a Seattle company that makes software that matches freight shipping jobs with trucking companies at set prices. It's popular: It makes it easy for shippers to book transportation at predictable prices, and it keeps the truckers busy.

It's a somewhat similar business to Uber, which essentially matches riders with drivers at set prices.

How did he end up winning the top job at Uber?

By being the last person standing. As it neared the end of its search for a new CEO to replace founder Travis Kalanick, Uber's board of directors was reportedly considering three candidates: Khosrowshahi, General Electric chairman Jeff Immelt, and Hewlett-Packard Enterprises CEO Meg Whitman.

Immelt is said to have withdrawn his candidacy on Sunday when it became clear to him that he didn't have the support to win the job. The New York Times reported that Uber's board was leaning toward Whitman at that point, but she and they couldn't agree on terms. That left Khosrowshahi, who the board felt was a strong choice and who was apparently willing to take the job on agreeable terms.

Khosrowshahi will take over a company in crisis

Uber, of course, has had a tremendously difficult year. Not only did its board relieve charismatic founder Kalanick of the top job in the wake of a devastating report on the company's internal culture, it also lost a slew of senior executives.

Complicating things for Khosrowshahi, Kalanick remains on Uber's board and reportedly hopes to resume the CEO role himself at some point. And Kalanick has been feuding with a key Uber investor, the venture capital firm Benchmark, which also has a seat on Uber's board -- and which has filed a lawsuit to try to force Kalanick out. 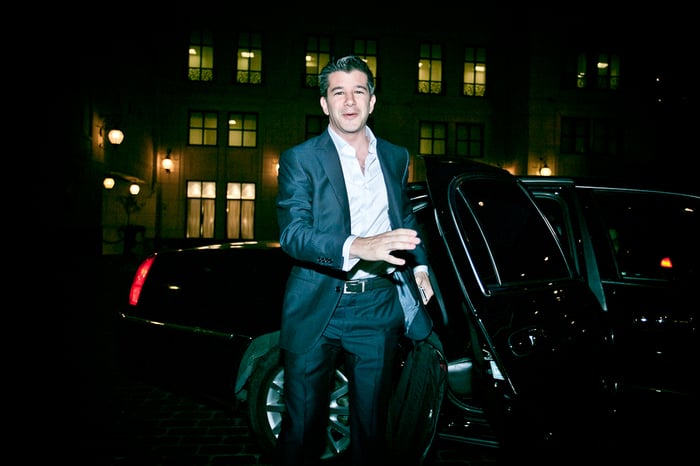 Uber's charismatic co-founder and former CEO, Travis Kalanick, remains on the company's board. His presence is one of several challenges that will greet new CEO Dara Khosrowshahi. Image source: Uber Technologies.

Kalanick was said to have favored Immelt for the CEO role, while Benchmark preferred Whitman. That suggests that Khosrowshahi may have been the compromise candidate. The new CEO may be facing some complicated political pressures early on.

As if that wasn't enough, Uber is also locked in a bitter and very public legal battle with Silicon Valley colossus Alphabet (GOOG -1.12%) (GOOGL -1.26%). Waymo, the Alphabet subsidiary formerly known as the Google Self-Driving Car Project, alleges that Uber received technology secrets stolen from Waymo by a former employee.

What's next for Uber and its new CEO?

At press time, Uber hadn't yet officially announced the hiring of Khosrowshahi. (The company apparently wanted to wait until it had announced the appointment to employees on Monday before making an official announcement.)

I expect that Khosrowshahi will take an approachable and conciliatory tone as he moves into the role, looking to pull the company together and get it back on a strong growth trajectory. He has a daunting set of tasks in front of him -- but his background suggests that he's fully up to the job. We'll find out.