Shares of Manitowoc Company (NYSE:MTW), a leading global manufacturer of cranes and lifting solutions, rose 40% in August, according to S&P Market Intelligence. The company reported second-quarter earnings -- excluding one-time charges -- of $0.05 per share, beating analysts' estimate of a $0.03 loss per share. But exceeding analysts' expectations was only one cause for the stock's rise.

Besides the warming thermometer, Wall Street's enthusiasm for Manitowoc also heated up in August. The stock, for example, received an upgrade from Baird early in the month. Then, after Manitowoc released second-quarter earnings, an analyst from Stifel raised his price target form $7 to $9. But wait -- there's more. The stock also received an upgrade from a J.P. Morgan analyst, who raised her price target, albeit less bullishly, from $6 to $7. 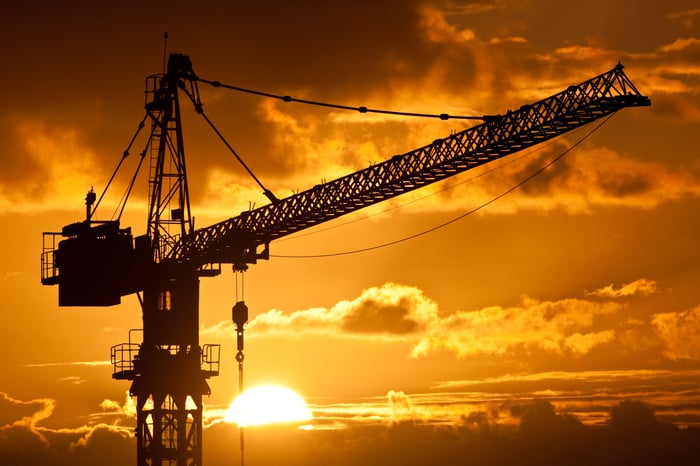 What was it about the earnings report that delighted Wall Street and investors so much? The company reported second-quarter orders, including the initial production order of a U.S. Army contract, of $379.5 million -- a 9% year-over-year increase. According to management's comments from the conference call, the increase "was primarily driven by new product introductions, partly offset by lower bookings of lattice boom crawler cranes."

More impressive, though, was the company's backlog growth. Whereas Manitowoc reported a backlog of $393.5 million at the end of Q2 2016, its backlog totaled $491.2 million at the end of this past quarter, representing a 25% increase. Elsewhere on the income statement, investors found even more reason to celebrate: The company reported that operating income increased 152% year over year.

Moving forward, there are several things investors can monitor -- for one, confirming that the company achieves its updated fiscal 2017 guidance is important. Although the company still expects revenue to drop from the $1.6 billion it reported last year, management now believes the decline will be less severe. Previously, it had forecast revenue to fall 8% to 10% year over year, but now it expects a 5% to 7% drop. Despite the decline on the top line, the company believes reducing costs can buoy earnings; management raised adjusted EBITDA guidance to $59 million to $69 million, from the previous range of $41 million to $59 million.

Even if the company meets its guidance, however, investors should be wary and wait for evidence of consistently improving performance. After all, the company has reported increasingly lower net income and operational cash flow in each year from 2014 to 2016.

Looking farther down the line, one thing that will be interesting to watch in the longer term is how successful the company is in reducing costs and generating an operating profit. Management has set the very ambitious target of a double-digit operating margin by 2020 -- very ambitious, considering its operating margins in fiscal 2015 and 2016, according to Morningstar, were negative 0.7% and negative 9.5%, respectively.