Please ensure Javascript is enabled for purposes of website accessibility
Log In Help Join The Motley Fool
Free Article Join Over 1 Million Premium Members And Get More In-Depth Stock Guidance and Research
By Brian Withers - Sep 22, 2017 at 7:33AM

In the latest push to give customers what they want, the company is rethinking its entire supply chain.

Global athletic apparel giant, Nike (NKE 1.73%), is re-engineering its product design and delivery processes to make them faster. This new initiative is called "express lane", and it serves as a key component of Nike's consumer direct offense, a focused effort to deliver products via the direct-to-consumer channel in 12 cities around the world.

The express lane will improve on the traditional supply chain and offer significant benefits to both the company and its investors. 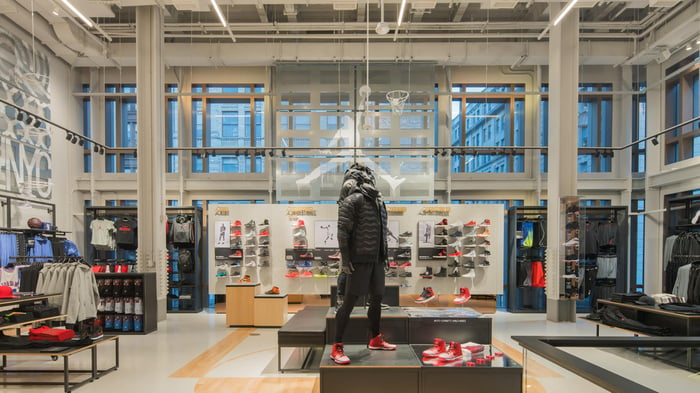 The graphic below shows how product moves from Nike's factories to the end customer in the wholesale channel, before Nike's express lane improvements have been implemented.

Nike products originate from 591 third-party factories in 42 countries around the world, but the majority of the apparel and footwear production is located in the Asia-Pacific region, where the top three countries account for 52% of the supply for footwear and 94% of apparel.

Factories ship finished products to Nike's 67 distribution centers in the regions where product is sold. For Nike, two-thirds of its revenue comes from North America and Europe, but most of its its manufacturing is on another continent. 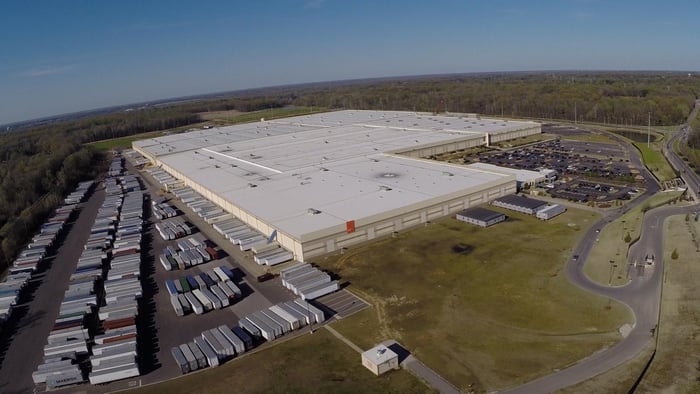 Lastly, Nike's distribution centers ship product to 20,000 wholesale partners, recognizing revenue and losing inventory visibility during this handoff (as indicated by the star in the graphic). Merchandise finally ends up in consumer hands in one of over 110,000 retail "doors" around the world.

While Nike doesn't share the actual cycle time of its supply chain process, the typical turnaround for a product to get from manufacturing to end user in a supply chain like this is measured in months. And for new offerings, the time from idea stage to first product can be considerable. A new product has to be designed, approved, tested, and prototyped. Between a design team that is often on a different continent than the factory and manual manufacturing processes, it can be difficult to get a new design idea to market quickly.

How is the express lane different?

CEO Mark Parker explained the three goals of the express lane in the most recent earnings call.

[T]he first is to fulfill and that means more quickly restocking what consumers want based on real-time sell-through data.

Nike will have express lane products fulfilled through its direct-to-consumer channel. This moves the revenue recognition point in the graphic above to when the customer makes the purchase, providing Nike with precise, real-time data on what product is selling and where.

The second is [...] editing and refreshing materials, colors, or prints on popular existing models based on consumers' insights.

This is similar to what Skechers does with its concept stores. Skechers uses these company-owned locations to get early customer feedback on small runs of a new product before it's ramped to full production. This feedback, in conjunction with more local manufacturing, can accelerate the refresh process.

And the third is create and that's creating new products and moving from design to shelf in half the time.

Nike is doing this in two ways. The first is empowering local teams to create products for their regions. On the most recent earnings call, Nike Brand President Trevor Edwards explained that "... we have complete teams from product to digital to creative teams to membership teams" co-located. Second, Nike's manufacturing revolution, or ManRev, will enable quick iteration of prototypes, and a more flexible manufacturing process will help get a product to market quickly.

The ability to deliver what customers really want, once they've shown Nike they want it, is a key advantage behind the express lane.

It's all about speed

CFO Andy Campion explains the benefits of speed this way:

As Nike delivers more of what customers want (and less of what they don't), it simultaneously reduces the overall number of styles produced and associated development costs, while generating the same amount of revenue, if not more.

More growth, better margins, and more of what customers want is a win-win-win for Nike, its customers, and investors.