This top pharma stock proves that slow and steady wins the race.

The biopharmaceutical industry has been exceptionally kind to investors over the past six years because of the introduction of several new classes of drugs, greater insurance coverage for low-income individuals in the United States, and the aging global population. Even so, the industry's best days are likely still ahead, thanks to these very same growth drivers.

Although the biopharmaceutical giants Gilead Sciences (GILD 2.41%) and Pfizer (PFE 1.29%) are both well positioned to take advantage of this favorable growth trend, one stock clearly stands out as the far more attractive buy right now. Read on to find out which of these top pharma stocks this Fool favors as a long-term buy and hold. 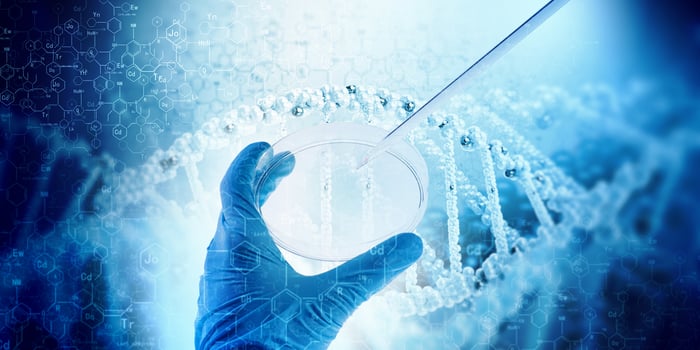 Gilead's answer to the bevy of new competitive threats to its hepatitis C franchise was to buy the adoptive cell therapy company Kite Pharma (NASDAQ: KITE) for approximately $12 billion. In tandem with this midsized acquisition, the biotech also issued $3 billion worth of senior unsecured notes -- even though it had more than enough cash on hand to buy Kite outright.

However, Gilead's acquisition of Kite, and subsequent debt offering, arguably aren't the types of bold moves this biotech needed to immediately turn things around. After all, Kite's lead CAR-T candidate, axicabtagene ciloleucel, is forecast to generate only around $1.7 billion in sales by 2022, according to EvaluatePharma.

While that sum might sound fairly substantial, it's nowhere near enough to offset the monstrous declines in Gilead's hepatitis franchise. By 2022, for example, Gilead remains on track to shed close to $7 billion in revenue from where it stood in 2016, and that's assuming Kite's axicabtagene ciloleucel performs as expected on the commercial front.

The biotech's decision to take on even more debt in the wake of this deal is also a rather questionable move. Before this latest debt offering, after all, Gilead's debt-to-equity ratio already stood at a stately 113%. That's not an unusual amount of leverage for a large-cap biotech, but it does limit the company's options in terms of pursing larger deals that might require a hefty chunk of debt financing.

All told, Gilead's foray into the speculative adoptive cell therapy market with its $12 billion buyout of Kite appears to be a prelude to more similarly sized deals in oncology. The bottom line is that Gilead still needs to add at least a few more new products to its portfolio to return to growth within a reasonable time frame -- even after this latest acquisition.

Because of a series of patent expirations for key drugs such as Lipitor and Celebrex, Pfizer's shares have underperformed the high-flying biopharmaceutical industry over the past six years. Even so, the total return on capital from this stock over this particularly turbulent period might actually surprise you.

As of result of Pfizer's extremely generous share-buyback and dividend program, the drugmaker's shares have generated markedly higher total returns on capital than the broader stock markets since the start of January 2011: 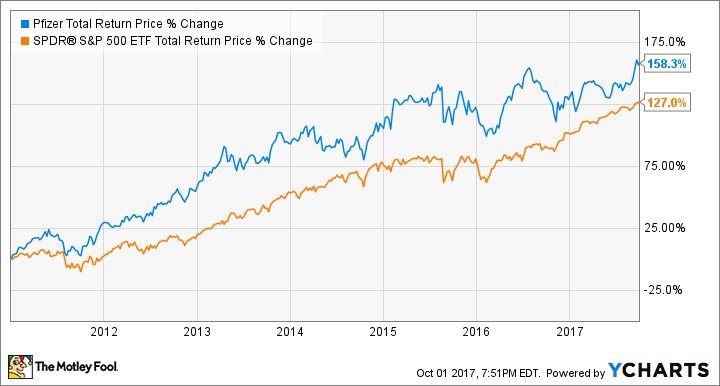 Turning to the details, Pfizer has plowed a stunning $111.7 billion into share repurchases and dividend payments since 2010. So while the drugmaker's top line certainly hasn't been a growth investor's paradise by any stretch of the imagination, management has, without a doubt, successfully navigated the company through the ravages of the patent cliff.

The best part is that Pfizer is finally nearing the end of the patent cliff, and its extremely diverse clinical pipeline is reportedly on track to produce upwards of 15 new blockbuster products within the next five years. As Pfizer's stock has proved that it can create enormous value for shareholders even during the worst of times, this stock should perform admirably once the company fully enters the next phase of its life cycle and closes the book on the patent cliff.

Which stock comes out on top?

Gilead's management arguably waited too long to pull the trigger on an acquisition to address its crumbling top line. And when it did, it didn't go after a target large enough to move the needle, so to speak. If anything, the company is now deeper in debt, has less cash on hand, and it bought a commercially unproven technology -- CAR-T therapy -- that has serious safety issues associated with it. Kite's CAR-T platform also isn't particularly well differentiated from the slew of competitors currently racing to bring their own adoptive cell therapies to market.

Pfizer, by contrast, comes off as the better long-term buy simply because of management's more cautious approach to value creation over the years. Instead of expending significant sums of capital on cutting-edge medicines with weak economic moats such as Gilead, Pfizer has chosen to acquire companies with products already on the market, and to use a big chunk of its remaining free cash flows to maintain a healthy shareholder-rewards program to smooth out the rough edges. That formula has kept Pfizer's stock churning ever higher -- even as the company's legacy products weighed on its top line in a big way.