Despite its massive size, Facebook (META -0.07%) gained almost 50% through the first three quarters of 2017. That sharp rise has many investors looking for other, potentially cheaper ways to gain exposure to the booming social media industry.

Twitter (TWTR -0.24%) might seem like an attractive option, given that the service drives the public conversation across areas like sports, politics, and entertainment. Meanwhile, investors can buy this stock at a 25% discount from where shares stood just a year ago.

Facebook was already a powerful business when the company went public in 2012, but since then, its streak of operating wins has been nothing short of amazing. It crossed 1.86 billion monthly users in 2016, or 1 billion more than it counted just four years prior. These fans are also getting more hooked on the service. In fact, the proportion of monthly active users who log in to their Facebook accounts each day has climbed to 64% from 57% in the past three years.

The company paired that audience and engagement growth with huge improvements in monetization so that net income soared to over $10 billion last year from approximately zero in 2012. 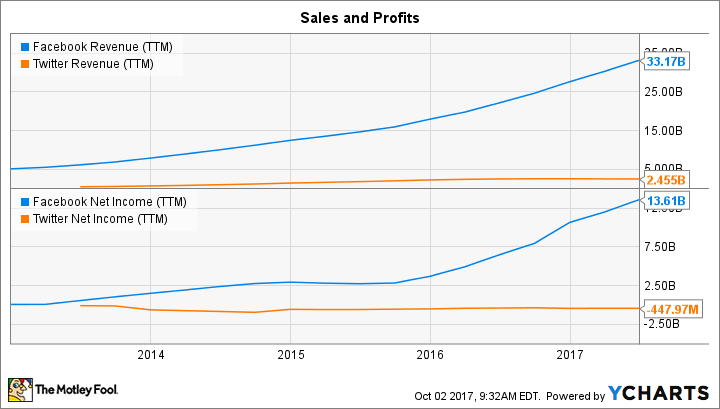 Any business that's stacked up against that run isn't likely to impress, but since Twitter is in the same industry, its worth comparing it directly to Facebook. Rather than soar, the company's monthly user base ticked up by just 4% last year, to 319 million. Twitter's revenue recently started declining, too, as it continues to struggle at delivering value to advertisers. The company has yet to find a way to monetize its usage, either, with net losses occurring in each of the last five fiscal years.

Both companies agree that rich media, especially video, will be the key growth driver for their industry in the years ahead. Facebook CEO Mark Zuckerberg even sees parallels to the stampede toward mobile browsing that has rearranged the entire industry since 2012.

Twitter executives are aggressively targeting the video format, and their latest live broadcasting push helped the company reach 55 million viewers last quarter for a 22% increase over the prior quarter.

However, Facebook has all of the advantages it needs to defend -- and extend -- its dominant market position as social media consumption shifts toward rich media. In addition to that far larger, more engaged user base, its healthy finances are allowing it to dedicate $7 billion toward extending and upgrading its data center infrastructure. Twitter's slowing growth, and record of net losses, has put the company in a far more defensive position. It plans to spend just between $300 million and $400 million on its capital expenditures this year.

Given that brighter operating outlook, it makes sense that Facebook would be valued at a big premium to Twitter. While the social media giant's incredible growth streak over the last few years points sets the stage for an eventual slowdown, investors have good reasons to expect it to continue to outperform its smaller peer in audience growth, revenue gains, and profits. Until Twitter can show progress on these critical metrics, I wouldn't considering buying it over Facebook.