On the surface, Roku's numbers look solid. Its total revenue rose 25% to $399 million last year, and grew another 23% annually during the first half of 2017. It dominated the US streaming media player market during the first quarter of 2017 with 37% market share according to Parks Associates. 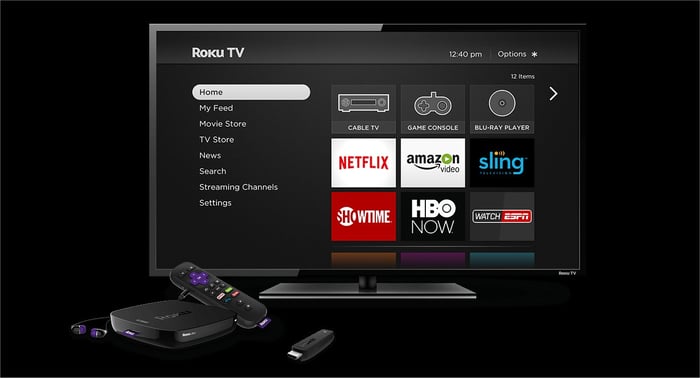 This makes Roku seem like a natural "pure play" on the rise of cord cutting, which harms media companies but helps streaming device makers and platform providers. Research firm Technavio expects the global streaming device market to grow at a compound annual growth rate of 17% between 2016 and 2020.

However, I personally won't buy Roku for a simple reason -- it lacks a clear path to profitability.

How does Roku make money?

Roku reports its revenues and gross profits in two segments -- "Player", which includes its portfolio of set-top boxes and dongles, and "Platform", which provides the software it runs on its own hardware and smart TVs.

Roku's Player revenues slipped 1.5% annually during the first half of 2017, but still accounted for 59% of its top line. That decline can be attributed to the saturation of the market and the growth of competitors like Amazon, Google, and Apple.

To stay competitive, Roku keeps its hardware prices low -- which caused the segment's gross margin to contract from 16.6% to 12.1% between the first halves of 2016 and 2017. Only 19% of Roku's gross profit came from the Player business during the first half of the year.

The remaining 81% came from its higher margin Platform segment, where gross profits more than doubled annually. The unit's revenues also rose 91% annually during the first half of 2017, accounting for 41% of its top line. That business mainly generates sales through content partnerships and advertisements.

Roku believes that the growth of its Platform business will offset ongoing declines at its Player business. The numbers support that strategy -- the platform's total active accounts rose 42% to 15.1 million during the first six months of 2017, total hours streamed surged 62% annually to 6.7 billion, and its average revenue per user (ARPU) rose 43% annually to $11.22 during that period.

But here's the problem...

Looking ahead, the competition for Roku's Players will likely intensify. Apple recently introduced its Apple TV 4K, Amazon introduced a new 4K Fire TV dongle for $70 and bundled its older Fire TV stick with the Echo Dot for $60, and Google offers cheap 4K streaming with its $70 Chromecast Ultra dongle.

Apple, Amazon, and Google can afford to sell these players at low margins or even losses to gain market share and expand their digital ecosystems, a strategy that would be too risky for Roku due to the weight of its Player business. Roku recently retaliated with five new streaming devices priced between $30 to $100, but this type of scattergun strategy is often a sign of desperation instead of disciplined growth.

Should you avoid Roku?

Roku's lack of profitability, narrow moat against aggressive competitors, and unproven strategy of pivoting from low margin hardware to high margin software raises red flags. Roku's price-to-sales ratio of 5.8 is also much higher than the industry average of 2.2 for pay TV providers, so I think investors should wait for the stock to cool off and see how it fares against its newest competitors before starting a position.