Please ensure Javascript is enabled for purposes of website accessibility
Log In Help Join The Motley Fool
Free Article Join Over 1 Million Premium Members And Get More In-Depth Stock Guidance and Research
By Travis Hoium - Oct 4, 2017 at 8:30AM

The fallout from last year's spate of recalls is subsiding, but the outlook for the motorcycle and powersports vehicle manufacturer remains troubled.

Polaris Industries (PII 1.76%) is starting to make a recovery from the recalls that plagued it for most of 2016. Sales have begun to rebound slightly, and net income was up in the first half of the year on an adjusted basis.

But these financial improvements come at a time when the markets Polaris competes in are deteriorating. Motorcycle sales are expected to be down at Polaris this year, mirroring a forecast decline at Harley-Davidson (HOG 1.04%). And the snowmobile market is collapsing because of the lack of snow in many key areas. These broader trends could overshadow anything the company itself can do over the next few years to improve its business. 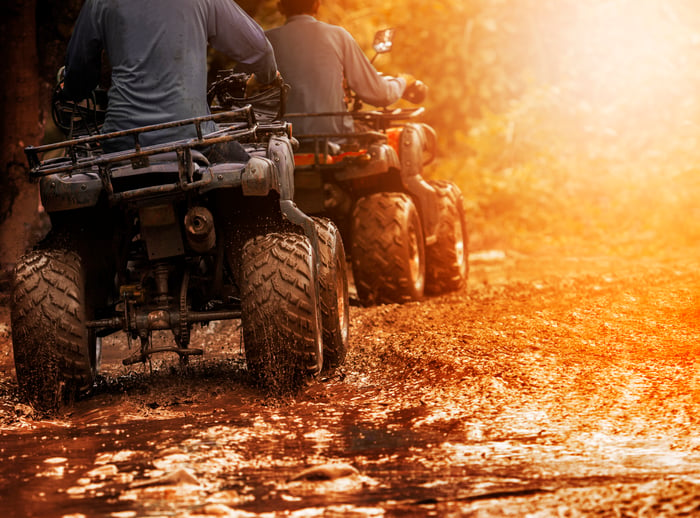 As the chart below shows, Polaris' revenues are growing again, but on the net income front, it's still struggling. And its necessary to note that  the growth shown was really driven by its acquisition of Transamerican Auto Parts, which closed late in 2016. Without that purchase, revenue would have been down slightly, due to weakness in motorcycle sales. 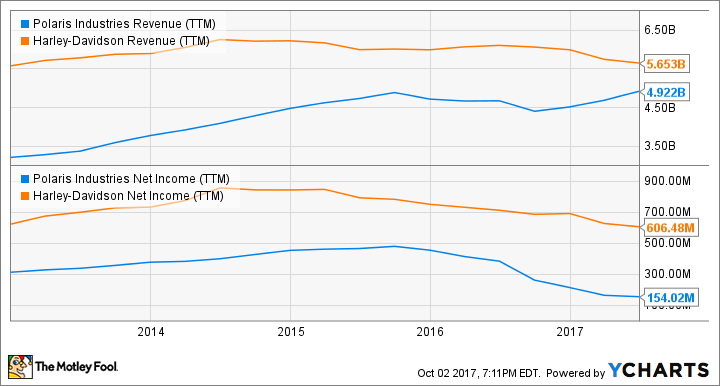 After a rough year, off-road vehicles and snowmobile sales were up 4% in the first half of the year to $1.57 billion, but motorcycle sales were down 23% to $317.2 million. Aftermarket sales contributed $442.2 million to the top line, but those were driven by the Transamerican acquisition.

The challenge is that even at a time when off-road sales are recovering slightly, Polaris is making a strategic change in its motorcycle division that has hurt sales. And motorcycles were supposed to be the growth driver for Polaris.

Motorcycles are in rough shape

You can see in the chart below that Polaris' motorcycle business was down big in the second quarter of 2017. And for the full year, management expects sales to be down by a percentage in the high teens.

Part of the decline can be attributed to the decision to end production of Victory brand bikes. But the motorcycle market overall is down, and even market share gains for Indian motorcycles can't completely overcome that trend. The bigger concern is that sales of its three-wheeled Slingshots were down "significantly" in the quarter, and it doesn't look like they'll pick up anytime soon. Management talked on its most recent conference call about how it needs to turn the line around, but there don't seem to be any obvious strategies for doing so. While there was an initial burst of sales when Slingshot was released a few years ago, it now appears there may not be much of a market for a vehicle that, as the company puts it, "blurs the lines between cars and motorcycles."

On top of Polaris' current weakness, recognize that all of its business segments are cyclical. Given that we're at a high point for the U.S. economy and the stock market, I'm worried the company's future won't look much brighter. If consumers are already pulling back on purchases of big-ticket items like motorcycles, sales could become a real challenge if the country goes into a recession.

Even with a recovery Polaris is expensive

Assuming Polaris hits its EPS guidance range of $4.35 to $4.50, shares are trading at 24 times this year's adjusted earnings. That's a lofty valuation for a company that's likely at its peak for this business cycle. And if motorcycle sales fall industry-wide, that will put more pressure on the top and bottom lines for Polaris. Given these factors, I don't think the company's stock is a buy right now.