When will the New Glenn blast off?

Amazon.com (AMZN 1.12%) CEO Jeff Bezos is spending $1 billion of his personal fortune every year -- and cashing in Amazon stock to do it -- as he attempts to build a rocket empire at Blue Origin. Now, it's starting to look like he might earn some of that back.

Last week, Blue Origin announced the signing of its third rocket launch customer. To be clear, these are commercial satellite launch contracts we are talking about -- not mere "space tourism" to the edge of space, aboard suborbital rockets, as has been previously reported. 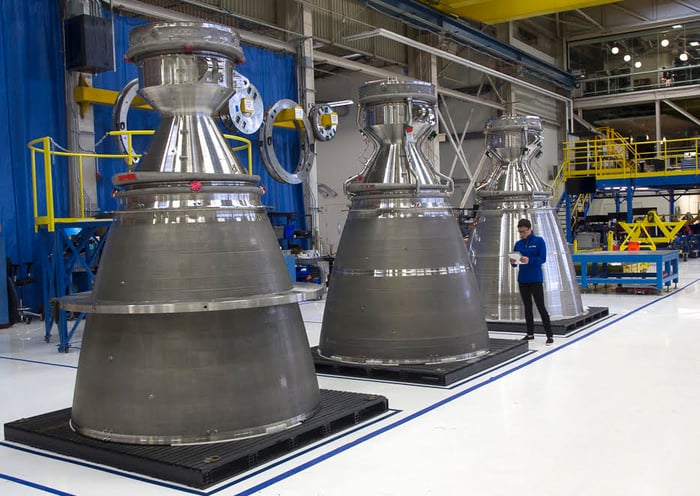 Blue Origin's got three BE-4 rocket engines in a row (but where's the actual rocket?). Image source: Blue Origin.

Since setting up shop in Kent, Washington, in 2000, Bezos and Blue Origin have succeeded in launching and landing a suborbital rocket (called the New Shepard) multiple times. The rocket is still not ready to begin commercial operation, however (and we still don't have an ETA for when it will be). Still, once all the kinks have been worked out, the plan is to load up New Shepard with tourists, and rocket them to the edge of space for lookabouts.

Even with New Shepard yet to make its first paid tourist flight, Bezos is pushing ahead with a new project to construct a massive rocket factory in Florida. There, he proposes to churn out even bigger New Glenn rockets capable of launching satellites into space, then returning to Earth for reuse -- much like SpaceX's Elon Musk has done with his Falcon 9 rockets.

In anticipation of this capability, Blue Origin began signing up launch customers earlier this year. In March, Blue Origin announced that European satcom Eutelsat has signed on as its inaugural customer, with a flight planned in 2021. Soon after will come a series of satellites launched for OneWeb. And now, just last week, Blue Origin has announced its third customer: Thai mobile communications start-up mu Space Corporation, says Blue Origin President Robert Meyerson, will ride a Blue Origin rocket into orbit sometime early in the next decade.

Now, it's certainly a good thing to have a big book of business at the ready and waiting to be fulfilled. But one small detail still needs to be addressed: Blue Origin hasn't yet actually built New Glenn -- nor proven itself capable of putting any rocket in orbit, for that matter.

When will this happen? Work on the Floridian rocket factory has been progressing all year long. Meyerson now thinks the factory will be ready to begin putting together the New Glenn prototype by early December.

And for that matter, where's the engine?

At the same time, Blue Origin is hard at work building the engines that will power New Glenn, the company's new BE-4 engine (which Blue Origin is incidentally also developing as the power source for Boeing (BA 0.94%) and Lockheed Martin's (LMT 0.49%) new fleet of Vulcan rockets). Blue Origin is cranking these out at its Huntsville, Alabama, facility, and has at least three of them built already (see photo above). One of the three was damaged in testing back in May, but as the company explained at the time, this is "not unusual during development," and no further mishaps have been reported since.

Curiously, Blue Origin only expects to have BE-4 fully developed and certified for spaceflight by 2019 -- in time for installation aboard the first United Launch Alliance Vulcan rocket built by Boeing and Lockheed, but nearly two full years after assembly of Blue Origin's first New Glenn begins. On the plus side, though, that means that if and when BE-4 is ready, Blue Origin should already have a rocket ready to put it to work on.