Please ensure Javascript is enabled for purposes of website accessibility
Log In Help Join The Motley Fool
Free Article Join Over 1 Million Premium Members And Get More In-Depth Stock Guidance and Research
By Harsh Chauhan - Oct 5, 2017 at 8:36AM

The stocks of both chipmakers have been on a stellar run, but which one is the better buy now?

Semiconductor stocks have been a blessed lot so far this year. The PHLX Semiconductor Sector Index has shot up impressively in 2017 thanks to several tech trends, including connected cars, the Internet of Things (IoT), mobile devices, and enterprise storage, that have boosted chip demand.

Marvell Technology Group (MRVL -2.25%) and Broadcom (AVGO -1.64%) are making good use of the expanding semiconductor market opportunity by tapping one or more of these trends. Not surprisingly, both these stocks have done extremely well over the past year, up more than 40%. 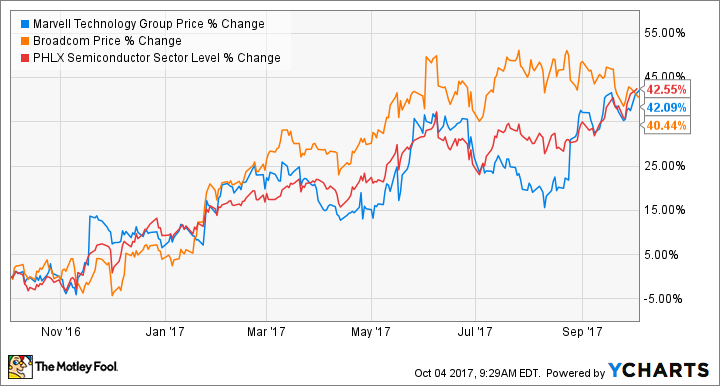 Marvell is carrying strong momentum right now, as its latest results show. Broadcom, on the other hand, looks primed for content gains as it works to increase market share across its existing businesses.

But which semiconductor stock is the better buy today? To find an answer, let's take a closer look at the catalysts and valuations of both companies. The case for Marvell Technology

Marvell Technology has found terrific traction in the storage market, which supplies more than half of its total revenue. The company is tapping the secular growth trend in this market by building controllers that go into hard-disk drives (HDDs) and solid-state drives (SSDs).

For instance, the global RAID (redundant array of inexpensive disks) controller market is expected to grow at a steady 6% until 2020, according to market researcher Technavio, driven by an increase in enterprise storage. RAID controllers are used to manage storage devices in a computer or an array of drives.

Marvell is aware of this booming end market, so it has developed a suite of controllers to manage storage connectivity in the cloud. More importantly, the company has been able to ship its storage controllers in large volumes, thanks to growing enterprise SSD demand.

In the past year and a half, the company has shipped over 50 million SSD controllers, with these chips now accounting for almost 25% of its total storage business. Furthermore, the SSD business isn't going to run out of momentum anytime soon, as demand for enterprise SSDs is estiamted to increase at a CAGR (compounded annual growth rate) of 17% over the next four years.

Although Marvell's biggest business by revenue will get bigger in the future, the company is trying to find other areas to boost its business, such as automotive. Marvell is making a specific play in the automotive space by targeting the Ethernet switch market, which could become a $1 billion business by 2023.

In fact, industry forecasts suggest that automotive Ethernet demand could rise by 42% a year for the next four years. Not surprisingly, Marvell has stepped on the gas by developing specific products for this space, such as a secure automotive Ethernet switch to safely transfer data between connected vehicles.

Just like Marvell, Broadcom is finding terrific traction in the storage business. Its enterprise storage revenue shot up 39% year over year last quarter, on the back of increased demand for controllers. Therefore, Broadcom and Marvell could go head-to-head in this arena, though the former now seems to have the upper hand, given the pace at which it is currently growing.

However, Broadcom's wireless business is going to account for the majority of its growth, given its strong positioning at Apple. Broadcom is believed to have landed more dollar content (leading to more revenue per device) in the new-generation iPhone(s).

As my Foolish colleague Ashraf Eassa pointed out, Broadcom's dollar content in the new iPhones could jump 40%, compared to the previous generation and the number of iPhones sold is also expected to increase.

Furthermore, Broadcom is intent on replicating its success in the wireless space across its entire business line. The company plans on increasing the amount of semiconductor content it supplies into its mature end markets, such as network infrastructure, by way of technological innovations.

Broadcom and Marvell both have their own catalysts, though the companies will compete for share in the storage business. Marvell, however, enjoys an advantage because it is targeting fast-growing markets such as connected cars, while Broadcom has already exited the IoT space. Broadcom's growth will depend a lot on content gains in its mature business segments such as wired infrastructure, which supplies half of its revenue.

Moreover, Marvell is the cheaper bet from a valuation perspective, as is clearly evident in the following table:

Investors will have to pay much less to buy into Marvell's growth, which makes it a value play as compared to Broadcom. Those looking for iPhone-related gains could consider Broadcom, despite its expensive valuation. But currently, from a long-term perspective, Marvell looks like the more logical bet.