In Ohio, the company thinks it can breathe new life into the retail monument that it helped to dismantle.

Amazon.com (AMZN -0.54%) has been opening fulfillment centers at a rapid pace ever since it announced earlier this year that it would create over 100,000 jobs in the U.S. over the next 18 months.

But the latest company news regarding a fulfillment center caught my attention as the project will be built on land where a former shopping mall once stood. Let's find out why this former mall site is so complementary to the company's expansion plans.

Amazon is shipping more stuff than ever

Amazon posted 25% year-over-year revenue growth in its most recent quarter, but the company is experiencing even faster unit growth through its fulfillment centers to the tune of 40%. A key driver of this growth is the success of the Fulfillment by Amazon (FBA) program, which allows third-party sellers to list their products on the Amazon's marketplace while using the company's fulfillment centers to store and ship orders. Revenue from this program grew 38% year over year to almost $7 billion last quarter. 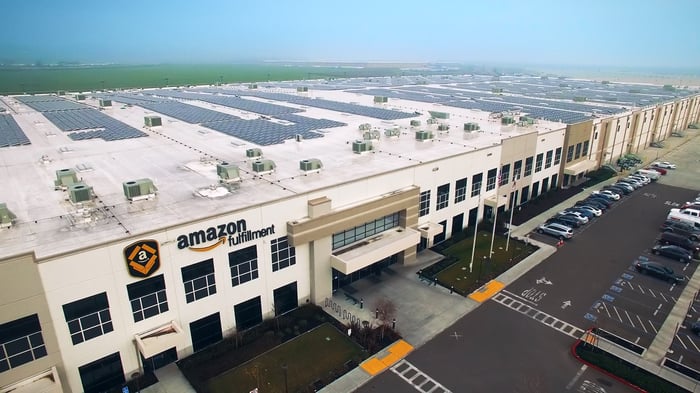 [W]e're very happy with the FBA program. ... [W]e think Prime and FBA are self-reinforcing. We know customers really like it, the additional selection that FBA provides.

As more consumers sign up for Prime -- and increase their spending with Amazon and its vendors as a result -- FBA volume goes up as well. Olsavsky also indicated that the company is matching the success of the FBA program with a "30% increase in square footage", and that requires building new fulfillment centers -- lots of them.

Converting a mall to a logistics center

This year, Amazon has announced plans for 23 new fulfillment centers or expansions of existing ones in the U.S. One of them, in North Randall, Ohio, is on the site of the now-demolished Randall Park Mall, once the largest mall in America. MWPVL International, a supply chain, distribution, and logistics consulting company, reports that as of Sept. 2017, Amazon has 105 existing fulfillment centers and 35 in planning. It's not surprising to me that Amazon picked a former mall site as an option for its expansion.

The property offers a number of advantages for the e-commerce company. The footprint required for the 855,000 square-foot facility and huge parking lot is around 67 acres, which the mall easily provides. The location, on the outskirts of Cleveland, enables access to Interstate 480 within minutes. The drive to Pittsburgh, Detroit, or Columbus is under three hours, putting the warehouse in close proximity to over 3 million people. Being located close to customers reduces Amazon's shipping costs and makes it easier for the company to deliver Prime orders in two days, one day, and now even on the same day or within the hour.

Amazon's 40% annual unit shipment growth requires the company to nearly double its fulfillment capacity every two years. Not all of this capacity increase comes from building new warehouse space -- some comes from efficiency improvements at existing facilities. In its 2014 annual report, Amazon said it was on the eighth generation of its fulfillment center, which is the culmination of "robotics, vision systems, and almost 20 years of software and mechanical innovation to fulfill customer orders." At the time, the company reported using 10,000 robots in 10 fulfillment centers. Currently the company is believed to have over 80,000 robots deployed in 25 fulfillment centers, but that's still a small portion of its total facilities.

Reports say the company will spend $177 million on this latest project in Ohio, and it will take several years before it's fully up to capacity. Darin Manney, head of Amazon's investor relations, indicates that new facilities take up to three years to get the desired "network efficiency."

With such tremendous unit growth, Amazon can't improve its capacity fast enough to keep up with demand. But with over 400 malls having closed their doors in the U.S., Amazon should have plenty of locations to build out its network for the foreseeable future.