Please ensure Javascript is enabled for purposes of website accessibility
Log In Help Join The Motley Fool
Free Article Join Over 1 Million Premium Members And Get More In-Depth Stock Guidance and Research
By John Bromels - Oct 7, 2017 at 9:06AM

I've been covering the industrial conglomerate for years. Here's why I decided to buy, and why you may want to, too.

General Electric (GE 2.28%) just can't seem to catch a break from the stock market. Shares of the industrial conglomerate were hit hard during the Great Recession, thanks to its GE Capital consumer credit division. While they've recovered from their 2009 lows, the price has hit the skids recently, dropping 22.7% so far this year while the S&P 500 has risen 13%.

Despite the negativity, I recently bought shares of GE. Here's why I took the risk -- because it is a risk -- and why you may want to as well. 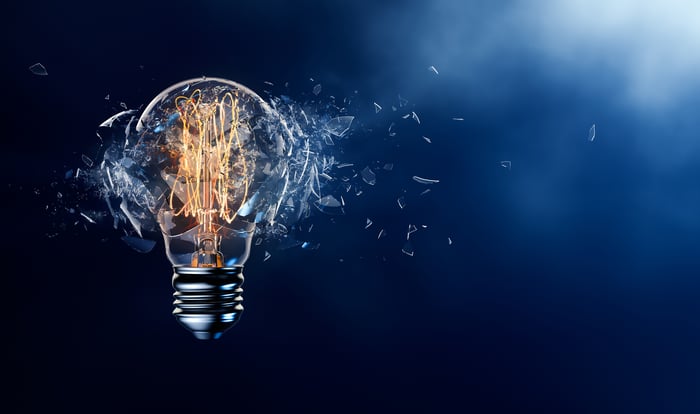 Industry titan General Electric has been plagued by a trend of underperformance. Here's why investors may want to buy anyway. Image source: Getty Images.

GE's core strengths remain the same as they were in 2015 when I started covering the company.

The company still has a very powerful global brand. Forbes ranks it as the 11th most valuable brand in the world, worth an estimated $37.9 billion. With that brand comes a reputation for quality, which is important when your customers are spending millions of dollars on a single product like a power turbine or a locomotive.

GE also invests heavily in research and development, spending $5.5 billion -- 4.4% of its revenue -- on research and development in 2016, and filing more than 3,000 patents during the year. The company's diverse units complement one another in this regard: For example, the company developed ceramic-matrix composites for its power turbines, but then modified them for use in its aircraft engines.

The company has also been investing heavily in digital, going so far as to rebrand itself "the digital industrial company." Its industrial software platform, Predix, complements GE's industrial machinery by offering operational software and data analytics to the company's customers. This software and services revenue tends to be less capital-intensive and have higher margins than the company's equipment sales; GE had a robust $237 billion backlog of long-term service agreements at the end of 2016, out of a total backlog of $321 billion.

Out of the wilderness

GE has long been an industrial powerhouse, but by the early 2000s, the company had expanded well beyond its industrial roots. In addition to its GE Capital arm -- which made a great deal of money offering private-label credit cards for customers like Home Depot -- the company had picked up a major stake in media company NBCUniversal. While these holdings made lots of money for the company, they didn't really fit in with the rest of the portfolio, and certainly didn't capitalize on GE's core strengths.

However, recent moves by departed CEO Jeff Immelt have refocused the company on its strengths: GE sold its stake in NBCUniversal in 2013. It spun off its private-label credit card business as Synchrony Financial in 2015. In 2016, the company made several important moves, selling its consumer-appliances business to Chinese company Haier and reaching an agreement to merge its underperforming oil and gas unit with oilfield services company Baker Hughes to create Baker Hughes, a GE Company (BKR 3.82%).

Now, the company is putting its consumer lighting unit up for sale, and has finalized its sale of GE Water to French company SUEZ. In other words, today's General Electric is looking a lot more like a pure industrial play than ever before. And that's good news for new CEO John Flannery.

Many GE observers reviled former CEO Jeff Immelt -- who stepped down earlier this year -- as a poor manager. Among the charges: He made big investments in oil and gas at the wrong time, right before the oil price downturn (he did); he divested "cash cow" GE Capital to the detriment of the company (debatable); and he had presided over a long period of underperformance at the company (also debatable, and remember that he took the reins right before the Great Recession hit).

Regardless of how one feels about Immelt, it was pretty clear that the company wasn't going to catch much of a break from the market with him still at the helm. But since Flannery took over in mid-June, the company's stock has dropped 14.8%, and that's before Flannery has even had the chance to report on his plans for the company.

With the stock down so much, it's currently yielding 3.9%, which should be tempting for investors. Its forward price-to-earnings ratio is also lower than its peers'. Plus, I anticipate that the market may react positively to Flannery's upcoming report, if only because his name isn't Jeff Immelt.

It's certainly not a sure thing, and I'm well aware of the risk I've taken by buying in now. But the company's long-term strengths and recent moves, and my desire to buy in while the stock price is depressed, tipped the scales for me to take a small position in GE now.

You might look at all this evidence and walk away with a very different conclusion about whether to buy GE or not. You might feel like the risks outweigh the potential upside. After all, Flannery might announce a strategy that doesn't seem right for the company or one that doesn't capitalize on its strengths. Buying in now is not just a bet on the company as it exists, but also on Flannery's acumen.

I think, though, that it's worth accepting the risks -- to own a piece of a remarkable company with a strong global brand at an attractive price.