These three stocks could have what it takes to sustain their competitive advantages and deliver stellar growth for decades to come.

In a frothy market, finding growth stocks that can live up to their valuations and deliver above-average returns over the next five-year period is challenging enough -- and picking companies that will deliver wins over a decades-long time horizon is even more difficult. That said, it's these rare growth stocks with long-term staying power that have the greatest capacity for life-changing gains.

With that in mind, we asked three of our contributing investors to profile a growth stock that has what it takes to help you ride out this century in style. Read on to see why they selected Axion Enterprise (AXON -1.69%), Embraer (ERJ -1.28%), and Actvision Blizzard (ATVI -0.63%). 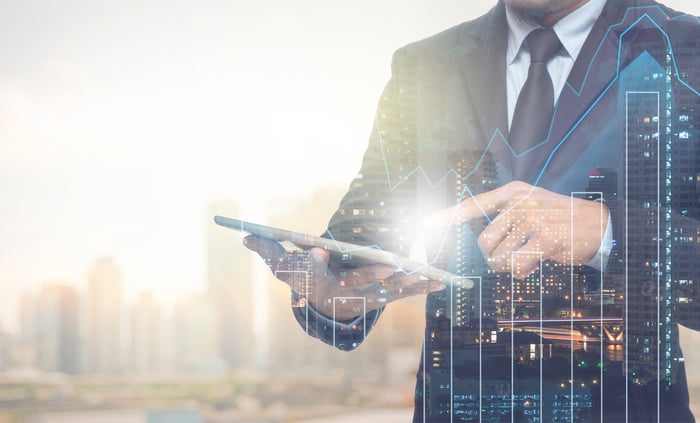 Get a clue to this growth potential

Rich Duprey (Axon Enterprise): Axon Enterprise may have a lock on the stun gun market with its Tasers, but the real growth opportunity for it is in body cameras and, perhaps more importantly, evidence management systems.

Axon has saturated the market with its Tasers, and though more police departments and government agencies continue to purchase the devices, the future is in one of replacements and upgrades. Instead, body cameras for law enforcement have a huge runway, and despite the crowded field, Axon does have a gateway because of its Taser contracts. Body cams are only just really catching on and the demand for them is burgeoning.

However, like Tasers, the body cam market probably has an upward limit on growth, even if the cycle is currently huge. The real opportunity will be in evidence management. Those cameras produce an awful lot of data that needs to be stored and managed for a long time, not to mention the system's use with other aspects of an agencies wealth of records that are created daily.

Especially because an evidence management system creates stickiness -- no one will readily abandon one system for another because of the huge sunk costs in terms of time and money invested -- Axon getting its Evidence.com systems established will create recurring revenue streams that may very well outlast the primary moneymakers it possesses.

Dan Caplinger (Embraer): The 21st century has brought about a renaissance in the airline industry. Throughout much of the 20th century, airlines went through cycles of booms and busts, punctuated by momentary profitability followed by inevitable bankruptcies among major carriers. However, airlines have finally found the secret to making money, and the profits that have poured in have given airline companies the capital they need to invest in fleet improvements. That's where Embraer comes in, with its regional jets having become increasingly popular among carriers seeking to serve smaller markets without having to put up with a lot of empty seats.

Embraer's commercial jets appeal to small regional carriers that enter into service contracts with the major airlines. Moreover, Embraer is working to roll out a new series of upgraded jets in the next year, and that could help the company extend its success for another complete product cycle. Shareholders have had to endure more volatile ups and downs in demand for executive business jets from the company, but a recovering economy in Latin America could help boost Embraer's prospects closer to home. All in all, with the airline industry still looking strong, Embraer has what it takes to grow in the years to come.

Keith Noonan (Activision Blizzard): Compared to music, movies, and print, video games are still a relatively young medium, and interactive entertainment seems primed to enjoy strong growth in the 21st century. As a leader in the space, Activision Blizzard is in a position to continue driving and benefiting from that momentum, and I think long-term investors have the opportunity to be a part of the ride and enjoy tremendous returns.

The company has a potent catalog of video game brands that includes franchises like Overwatch, Starcraft, and Call of Duty -- as well as a history of delivering new, innovative properties and well-received products. In addition to the strength of its individual franchises, its publishing wings have also built up considerable brand appeal. The Blizzard division in particular has cultivated a sterling reputation thanks to the quality of its output and carries considerable clout among video game enthusiasts. Past success doesn't guarantee future results, but when a company has been at the forefront of a highly competitive industry for decades, it's worth paying attention.

Looking ahead, Activision Blizzard should be able to continue improving margins as video game sales migrate to digital channels and in-game purchases make up a greater share of overall revenue. The publisher is also positioned to be a leader in emerging categories like esports and mixed reality and to grow its audience along with the expanding size of the global middle class.

Activision Blizzard stands out as a well-managed business in a promising growth industry, and it has the potential to be one of this century's most successful entertainment companies.