At first glance, you'd be excused for thinking that Citigroup (C 1.77%) had a great quarter, as both its revenue and earnings climbed on a year-over-year basis in the three months ended Sept. 30. Yet its stock promptly proceeded to decline in the wake of the results, spurred by fears of an incipient uptick in credit losses. It ended the day down by 3.4%.

Citigroup earned $4.1 billion in the quarter. That equates to an 8% increase over the year-ago period, in which it earned $3.8 billion. On a per-share basis, the bank's earnings equate to $1.42, which was well above the consensus forecast calling for earnings per share of $1.32.

"We delivered a very strong quarter, showing the balance of our franchise by both product and geography and highlighting our multiple engines of client-led growth," said CEO Michael Corbat in prepared remarks. "We had revenue increases in many of the products we have been investing in, tightly managed our expenses, and again saw loan growth in both our consumer and institutional businesses." Citigroup's top line climbed by 2% to $18.2 billion for the quarter. That, too, was better than analysts expected. The average estimate of 16 analysts tracked by Yahoo! Finance was for total revenue of $17.9 billion.

The bank's revenue was fueled by noninterest income from the institutional-clients group -- essentially, its Wall Street operations. Citigroup saw revenue climb in all facets of the unit, including treasury and trade solutions, investment banking, and private banking.

The one area in its investment bank that took a hit was its trading revenue. Citigroup had previously warned that they would be off by 15%, which is right around where its bread-and-butter fixed-income trading unit came out, reporting a 16% drop.

On the traditional banking side, while total loans at the bank climbed 2% from the third quarter of last year, the income from Citigroup's loan portfolio didn't budge, as a result of lower lending margins. Its net interest margin fell to 2.79%, down from 2.95% in the year-ago period.

Expenses were also down at the bank, dropping by 2%. Contributing to this drop, Citigroup shed nearly 100 branches during the quarter. 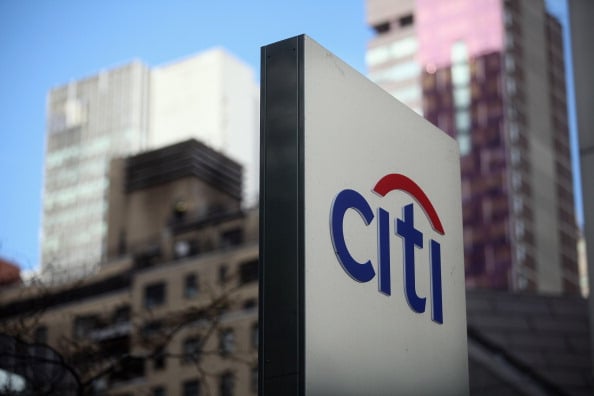 The concern from investors seemed to stem from trends in Citigroup's credit costs. Its provision for credit losses rose 15% relative to 12 months ago. All told, the bank set aside $2 billion to cover future loan losses.

Some of this was related to the hurricanes that struck states Florida, Texas, and elsewhere over the past few months, which accounted for about a third of the increase. The rest was the result of higher credit losses during the quarter.

Despite the market's reaction to Citigroup's earnings, the bank had a solid quarter. With earnings and revenue up, and comfortably above analysts' estimates, it seems clear that the nation's fourth biggest bank by assets is headed in the right direction.

Citigroup's Investment Banking Business Is Struggling More Than Its Peers -- Should Investors Be Worried?
371%